The Indian Medical Association (IMA) on Thursday lodged a police complaint against yoga guru Ramdev, seeking a first information report over his 'dishonest and wrongful representations' on modern medicine. 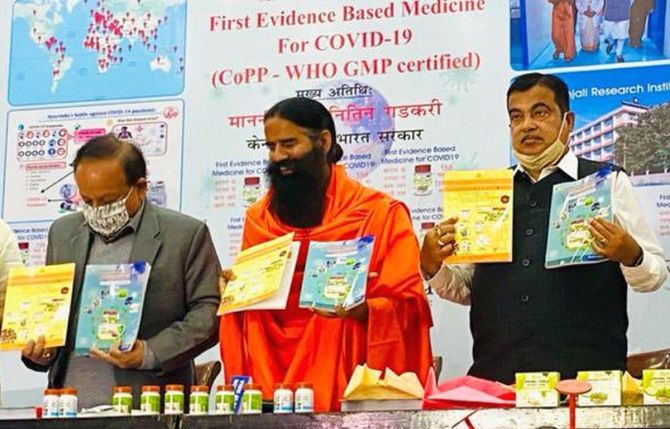 In the complaint submitted at the IP Estate Police Station, the apex medical body said Ramdev has 'wilfully and deliberately spread false, baseless and malicious information' about treatment of Covid patients by established and approved methods and drugs.

"We have received the complaint and enquiry is being conducted," a senior Delhi Police officer said.

The IMA's complaint dated May 9 said, 'Swami Ramdev, in order to take advantage of the Covid situation, on a public platform in furtherance of his ulterior motives has put forth dishonest and wrongful representations with regard to allopathic (sic) medicines and other allied treatment techniques of modern medical science for the COVID-19 virus.

'In a video which has surfaced and is being shared widely throughout the social media, Swami Ramdev is seen wilfully and deliberately spreading false, baseless and malicious information with regard to the treatment of various patients suffering from COVID-19 by established and approved treatment methods and drugs,' it said.

The IMA had earlier written to Prime Minister Narendra Modi demanding that yoga guru Ramdev be booked immediately under sedition charges for alleged misinformation campaign on vaccination and challenging government protocols for treatment of COVID-19.

The apex medical body of modern doctors has also served a defamation notice on Ramdev for his alleged disparaging remarks against modern medicine and its practitioners, demanding an apology from him within 15 days, failing which it said it will demand a compensation of Rs 1,000 crore from the yoga guru.

On Sunday, Ramdev was forced to withdraw a statement made in the viral video clip in which he is heard questioning some of the medicines being used to treat the coronavirus infection and saying that 'lakhs have died from taking 'allopathic' medicines for COVID-19'.

The remarks were met with vociferous protests from the doctors' association, following which Union Health Minister Harsh Vardhan asked him to withdraw the 'extremely unfortunate' statement.

A day later, the yoga guru posed 25 questions to the IMA in an 'open letter' on his Twitter handle, asking if modern medicine offered permanent relief for ailments such as hypertension and type-1 and 2 diabetes.

He went on to list modern-day ailments such as Parkinson's disease and wondered if modern medicine had any painless cure to treat infertility as well as to reverse ageing and increase hemoglobin.

Soon after, Ramdev's close aide Acharya Balkrishna took to Twitter, saying the yoga guru and Ayurveda were being targeted by practitioners of modern medicine under the IMA as part of a conspiracy.