Andhra Pradesh Chief Minister N Kiran Kumar Reddy on Saturday virtually dared former Congress Member of Parliament S Jaganmohan Reddy to pull down his government, bluntly telling him that he was not at his mercy.

"No one is at anyone's mercy here. I'm not at anybody's mercy. Everyone who is here are at the mercy of Congress party," he told a press conference in New Delhi when asked about Jagan's boast that the chief minister was surviving due to his mercy.

Jagan had told the media in New Delhi recently that he was doing a great favour to the Congress.

"As I'm a gentleman, your (Kiran Kumar's) government is surviving. Had I told my MLAs to break away from Congress, your government would have collapsed long ago," Jagan Reddy had said.

Dismissing allegations from Jagan, the chief minister said "no injustice from Congress party has ever been done to him or his family."

"We are very clear that madam (Sonia) Gandhi has got a very special place and liking towards (the late) Rajasekhar Reddy and she has encouraged Rajasekhar Reddy. That is the reason for his growth as the leader in the state," Kiran Reddy said.

Attacking Jagan, the chief minister, who met Gandhi on Saturday, said those people who are now talking have never been in politics nor have they helped Rajasekhar Reddy to win any election anywhere or Congress party.

"It is their entry into politics a year or two years back and we are the people here from the Congress party...the leaders here... we have been working with Rajasekhar Reddy for last 20 (to) 30 years," the Chief Minister said.

He reminded Jagan that Rajasekhar Reddy became the chief minister on both the occasions as the Congress Legislative Party had authorised Sonia Gandhi to select the CLP leader.

It is because of Congress that Rajasekhar Reddy has become a "tall" leader not only in the state but in the country, the Chief Minister said.

Besides he reminded Jagan, who quit Congress as also the Lok Sabha seat recently, that though his late father had differences he had never challenged the authority of the Congress high command.

Meanwhile, sandwiched between conflicting demands on the issue of separate Telangana, N Kiran Kumar Reddy treaded cautiously on the ticklish matter and said pro-statehood agitation has not yet crossed the "limit of lawlessness".

Reacting to questions on the ongoing agitaion for Telangana state, Reddy said "democratically whatever they are allowed to do, we are not going to come in the way of that. They can protest according to democratic rights they have got."

"These demonstrations and other things are going on...and they have not crossed any limit of lawlessness....(If) It is within the limit, the government does not mind," he said.

Reddy had met Prime Minister Manmohan Singh on Friday for the first time after the release of the Justice Srikrishna Committee report on the issue of Telangana.

The Committee had given six options including keeping Andhra Pradesh united with Constitutional powers to Telangana region and carving out Telangana from Andhra Pradesh. 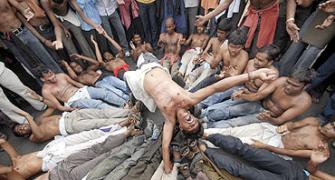 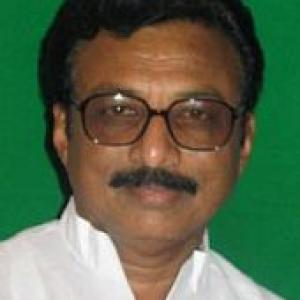