Maharashtra Governor Bhagat Singh Koshyari's comments that 'Mumbai will have no money' if the Gujaratis and Rajasthanis were to leave triggered a massive controversy on Saturday, forcing Chief Minister Eknath Shinde to state that he disagreed with the Governor. As Opposition leaders slammed Koshyari and sought apology from him, the governor said his comments were misconstrued.

Koshyari made the controversial comments during a function to name a chowk (intersection) in suburban Andheri on Friday evening.

"I tell people here that if Gujaratis and Rajasthanis are removed from Maharashtra, especially from Mumbai and Thane, you will be left with no money and Mumbai will not be a financial capital," he said.

As the comments drew widespread condemnation, Koshyari said on Saturday that the statement was misconstrued, and asked political parties not to create a controversy.

There was no question of belittling the contribution of Marathi-speaking people and 'lauding one community does not mean insulting another', he said.

The former chief minister, whose relations with Koshyari were often strained while in office, accused the governor of 'dividing' Hindus living in Mumbai and Thane.

Holding a press conference, Thackeray said, "The hatred that the governor harbours in his mind against the Marathi people has inadvertently come out."

"Time has come to decide whether to send Koshyari back home or to jail...In the last three years, he has insulted Marathi-speaking people despite staying in Maharashtra. Now with these comments, he has brought disrespect to the governor's post," the Sena president said.

Amid the backlash, Chief Minister Shinde, leader of the rebel Shiv Sena faction, said he disagreed with Koshyari's remarks.

Talking to reporters at Malegaon, Shinde said, "We don't agree with Koshyari's remarks. It's his personal view. He has now issued a clarification. He occupies a constitutional post and should take care that his actions do not insult others."

"The Marathi community's hard work has contributed to the development and progress of Mumbai....No one can insult Mumbai and Marathi people," he added.

"Even in the industrial sector, Marathi-speaking people have made global strides. We don't agree with the governor's remarks," the former chief minister said.

State Nationalist Congress Party president Jayant Patil said it was unfortunate that the governor has 'scant respect for the Marathi-speaking working class due to whose hard work Mumbai progressed and developed'.

Koshyari doubted Marathi people's capability to create wealth and this was an insult to Maharashtra, he said.

State Congress chief Nana Patole said Koshyari's remarks were outrageous and he had always 'insulted Maharashtra through his actions and words'.

"The Centre should seek Koshyari's resignation and send him to Gujarat or Rajasthan," he said.

Marathi-speaking people were instrumental in creating the state of Maharashtra with Mumbai as its capital and nation-building was not possible without Maharashtra, the NCP leader said.

Shiv Sena MP Sanjay Raut tweeted that the governor wanted to imply that Marathi people and Maharashtra were 'beggars'.

Maharashtra Navnirman Sena (MNS) chief Raj Thackeray said Koshyari should not make such statements if he was not aware of Maharashtra's history.

Outsiders come to the state and start businesses here because Marathi speakers created a conducive atmosphere in the state, Raj said, adding that the governor should not provoke Marathi people. 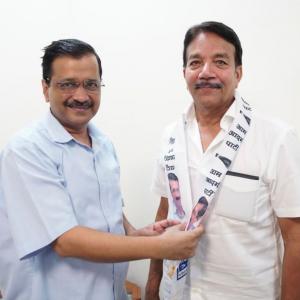