News
Business
Movies
Sports
Cricket
Get Ahead
Money Tips
Shopping
Sign in  |  Create a Rediffmail account
Rediff.com  » News » 'If Art 370 was so life-changing, then...': PM's barb at Congress

'Despite having majority governments, why did you allow it to remain temporary. You did not have the conviction or strength to bring reform' 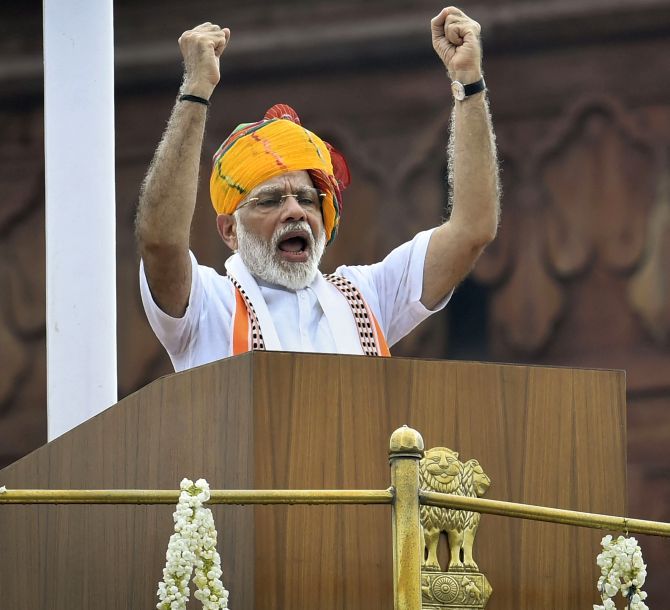 IMAGE: Prime Minister Narendra Modi addresses the nation from the ramparts of the Red Fort on the occasion of 73rd Independence Day in New Delhi. Photograph: Arun Sharma/PTI Photo

Asserting that he did not have any personal agenda and was accomplishing the task entrusted to him by people, Prime Minister Narendra Modi on Thursday said it was the government's responsibility to fulfil the hopes and aspirations of people of Jammu and Kashmir and help them get new wings.

Addressing the nation on 73rd Independence Day from the ramparts of the Red Fort, he said India is now one nation with one Constitution after both houses of Parliament passed the abrogation of Article 370 and 35A with a two-third majority.

He said his government is not shying away from taking big decisions and said the scrapping of Article 35A and provisions of Article 370 were some such steps that have never been taken in the last 70 years.

He touted, within 10 weeks of returning back to power, his government took key decisions to fulfil aspirations of people and cited the scrapping of special status accorded to Jammu and Kashmir and the new law on triple talaq as its resolve.

"It has been under ten weeks since the new government was formed but several path-breaking decisions have been taken. This includes decisions for Jammu, Kashmir, Ladakh, the end of Triple Talaq, steps for the welfare of farmers and traders," he said.

"The work that did not happen in 70 years, that task of removing Article 370 and 35A was accomplished in 70 days and both the houses of Parliament passed it with two-third majority," he noted, adding that the spirit of "one nation, one Constitution" has finally become a reality and India is proud of that.

"It is our responsibility to fulfil the hopes and aspirations of people of Jammu and Kashmir and help provide them new wings," he noted.

Now even the ordinary citizen of Jammu and Kashmir can directly ask the government, he said.

Modi said his government has dedicated itself on all fronts in the service of countrymen and asserted it neither nurses problems nor festers them.

The prime minister said previous governments made efforts in the past 70 years to deal with the Kashmir issue, but they did not bear the desired results and noted that "a new approach was needed".

While some in political corridors kept saying about removing Article 370 and 35-A, he said, they did not have the courage to take the bold step his government has taken.

"Those who advocate Article 370, the country is asking them if Article 370/35A was so important and life changing then why did they not make it permanent in the Constitution. Despite having majority governments, why did you allow it to remain temporary. You did not have the conviction or strength to bring reform," he said.

"We think differently and it is 'India First' for us. Politics comes and goes but steps in the interest of the nation are paramount," he said.

"I have no personal agenda," he said, noting he has only come to accomplish the task entrusted to him by the people of the country.

The prime minister said the previous arrangement in Jammu, Kashmir and Ladakh encouraged corruption, nepotism and there was injustice when it came to the issue of rights of women, children, Dalits, tribal communities. He also said the dreams of sanitation workers in the state have remained unfulfilled, "How can we accept such a situation?".

Talking about the other major steps taken by his government, he said, if in this country, the practice of Sati can be banned, why could it not raise a voice against triple talaq.

He said five years ago when his government came to power, people wondered if the country would change for the good, but people now say "yes, my country can change".