The forensic sciences team from Hyderabad, which is examining the material used in the twin blast, said that ammonium nitrate and improvised explosive devices were used to cause maximum damage along with fuel, urea, ball bearings, sharpnels and a timer.

The material was packed in a tiffin box and was planted on bicycles.  The fuel composition was aimed at spreading fire so that the blasts would have a greater impact.

The bomb composition is similar to the one used during the Pune blasts in August last year. However, in Pune, the bombs were not properly assembled and because of the faulty timer the blasts did not have the desired effect.

National Investigation Agency officials say that they do not rule out that the same module carried out the Hyderabad and Pune blasts. Initial leads point that the Indian Mujahideen masterminded the operation, they said. 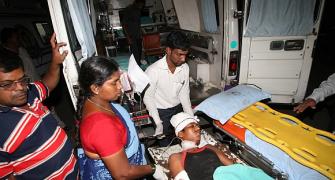