News
Business
Movies
Sports
Cricket
Get Ahead
Money Tips
Shopping
Sign in  |  Create a Rediffmail account
Rediff.com  » News » 'I would have to work 50 yrs to be worthy of this award'

One of his earliest memories of childhood that interfaith leader and bestselling author Dr Eboo Patel remembers is that of his father's friend Ajit Uncle. Eboo was about four or five when he asked the question that has been bothering him: What is on your head?

Ajit Uncle, Patel said, was not offended. He said the turban reminded him that he had to be a good person, and that God was watching him

Patel, who founded the Interfaith Youth Core nearly a decade ago, said one of the requirements for members is that they should learn a few good traditions in other faiths. His introduction to pluralism came through people like Ajit Uncle, and his interest in other faiths blossomed through his school and college years when he, raised a Muslim, came to know Jewish, Christian and Hindu faiths through his classmates.

Named by US News & World Report as one of America's Best Leaders of 2009, Patel is the author of books like Acts of Faith: The Story of an American Muslim, and a regular contributor to The Washington Post, National Public Radio and CNN.

Patel, who is fond of quoting what he feels is the most beautiful verse of the holy Koran, which says that 'God made us different nations and tribes that we may come to know one another' spoke at length at the Guru Nanak Prize event about the beautiful things he has observed in Sikhism.

When he was 23 or 24, Patel said, he had attended the World Parliament of Religions conference in South Africa. He remembered "walking past many food vendors until he arrived at a Sikh temple where hundreds were sitting cross-legged and enjoying the simple, tasty and wholesome langar. It came free and with a lot of blessings."

At the same gurdwara, he found a man cleaning shoes devotedly. He told Patel the dust of the pilgrims' shoes was holy.

Patel said his own pilgrimages remind him that religious pluralism in America has existed since the beginning of the republic. A group of Quakers drew in 1657 a document known as the Flushing Remonstrance advocating religious freedom and prevailed upon the tyrannical governor Peter Stuyvesant to accept it, Patel said.

George Washington promoted pluralism when he promised the Jews in America freedom of religion. One of the best tributes to pluralism in recent times came from Nelson Mandela, Patel added.

Mandela, who had addressed the Parliament of Religions, pointed out from the dais to Robben Island where he had been imprisoned for over 27 years during the apartheid regime. He said he would still be there, but for people of different faiths working together.

Patel said the Civil Rights movement in America would not have succeeded without the energy of the Jewish clergy and lay people who marched and fought along with black leaders.

Turning to Sardar Ishar Singh Bindra, the family patriarch who initiated the Guru Nanak Prize, and his son T J Bindra, Patel said the family has pioneered, through the award and the Sikh studies chair at Hofstra, something valuable, akin to some of the more serious achievements in struggle for civil rights. 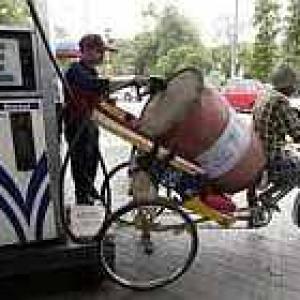