Actor Taapsee Pannu and director Anurag Kashyap resumed shooting for their film Dobaaraa on Saturday, both using social media to speak for the first time since Income Tax raids on their premises with posts indicating their spirit remained intact. 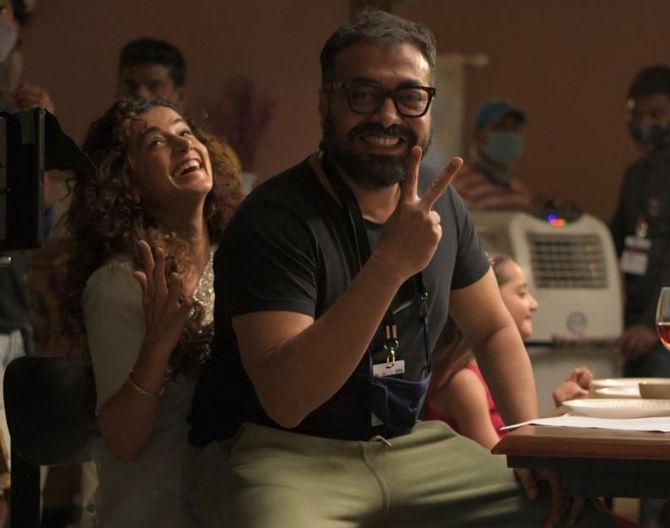 'With all our love to all the haters,' Kashyap said in a message on Instagram to announce the resumption of shooting of his new film and share an on-set picture of Pannu and himself laughing and showing the victory sign.

Earlier, in the day Pannu put out three tweets -- on an 'alleged bungalow' in Paris, the 'alleged receipt' of Rs 5 crore and her 'memory of 2013 raid'.

These were the first comments from Kashyap and Pannu -- both outspoken and known for expressing their views on a range of issues -- since the Income Tax Department began searching their homes and offices on March 3.

The raids also covered Kashyap's partners who launched the now-shuttered production house Phantom Films with him.

Pannu's three-point statement on Twitter took a jibe at Finance Minister Nirmala Sitharaman's statement that the actor was raided in 2013 as well.

'Three days of intense search of 3 things primarily 1.The keys of the 'alleged' bungalow that I apparently own in Paris. Because summer holidays are around the corner,' read the first post.

The second said, '2. The 'alleged' receipt worth 5 crores to frame n keep for future pitching coz I've been refused that money before (sic).'

The third dealt with Sitharaman's comment. '3. My memory of 2013 raid that happened with me according to our honourable finance minister P.S- 'not so sasti' anymore (sic).'

Sitharaman on Friday said the same people were raided in 2013 as well, but no issue was made out then as it is being done now.

Refusing to comment on individual cases, she said it is in the national interest to know if some evasion is happening.

Following Pannu, Kashyap, who was working on Dobaaraa with the actor before the IT raids, also decided to break his radio silence on social media with a special message for the 'haters'.

'And we restart #DoBaaraa... with all our love to all the haters...' the filmmaker wrote alongside the photograph.

Kashyap, however, refrained from directly addressing the raids.

Dobaaraa marks the second collaboration between the actor and the filmmaker, who previously worked on the 2018 romance drama Manmarziyaan.

The searches targeting Pannu and Kashyap are part of a tax evasion probe against Phantom Films.

The others searched included some employees of Phantom Films, which was dissolved in 2018, and its then promoters Kashyap, director-producer Vikramaditya Motwane, producer Vikas Bahl and producer-distributor Madhu Mantena.

The business transactions of films made under the banner of Phantom Films are also being probed.

The Income Tax Department has detected financial irregularities of over Rs 650 crore after it raided two film production companies, two talent management companies and a leading actress, the Central Board of Direct Taxes has claimed.

'Evidence of cash receipts by the leading actress amounting to Rs 5 crore has been recovered and further investigation is going on,' the CBDT said in a statement.

Also, 'non-genuine or bogus expenditure' to related concerns by the leading producers and directors having tax implication of about Rs 20 crore has been detected, the statement said.

'Similar findings have been made in the case of the leading actress also,' it alleged.