I need Nitish govt for development: PM writes to Bihar

Asserting that reforms are impossible in an environment of mismanagement and anarchy, Prime Minister Narendra Modi on Thursday said he needs the Nitish Kumar government in Bihar to ensure that there is no paucity in the state's development and welfare schemes continue uninterrupted. 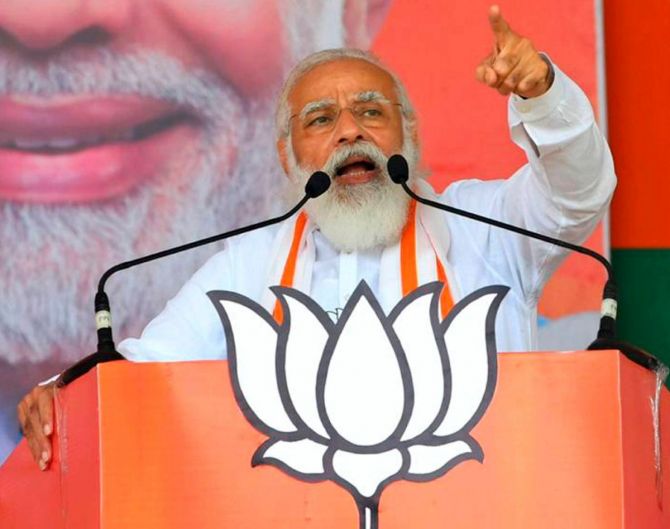 In an open letter to the people of Bihar ahead of the final phase of voting on Saturday, Modi said people have full faith that only an National Democratic Alliance government can work for the state's development.

"I am confident about the development of Bihar. I need the Nitish Kumar government in Bihar to ensure that there is no paucity in Bihar's development and the welfare schemes continue there uninterrupted," he said.

"I have full faith that the power of 'double engine' will take Bihar to new heights of development in this decade," Modi said.

In his four-page letter in Hindi, the prime minister also said that better infrastructure and rule of law are imperative for social and economic prosperity and only the NDA can provide that in Bihar.

The NDA has done work in all sectors in Bihar -- electricity, water, roads, health, education and for law and order, he said.

Modi said it was a matter of pride that the focus in Bihar polls has been on development. He said the NDA has presented its report card to people and shared its vision for the future.

He asserted that votes are being cast in Bihar "not on caste, but on development; not on false promises, but on firm intentions; not on misrule (kushasan), but on good governance (sushasan); not on corruption, but on honesty; not on opportunism, but on the vision of self-reliance".

Modi said that through the letter, he wants to talk about Bihar's development, the confidence on National Democratic Alliance for the development and the coalition's resolve to uphold that trust.

"Whether young or old, poor or farmers, people of every section of the society are coming forward to bless (the NDA), this shows the picture of a modern and new Bihar. The zeal of voters during the mega festival of democracy in Bihar has inspired all of us to work more enthusiastically," Modi said.

Bihar has been a thriving place for democracy, knowledge, science, scripture, economics and the NDA government, following the mantra of 'sabka saath, sabka vikas, sabka vishwas', is committed to re-establish the glorious past of Bihar, he asserted.

Stressing that reforms are impossible in an environment of mismanagement and anarchy, Modi said that post-2005, there was a change in Bihar's environment and the process of reform was started.

The NDA government in Bihar has made "good governance (sushasan)" its major poll plank and has hit out at the RJD-led grand alliance over the issues of corruption and law and order under Lalu Yadav's tenure as the chief minister in the pre-2005 era.

Asserting that the dignity of human life is paramount for the NDA, Modi said that the coalition considers every citizen to be a partner in the progress of the country.

Earlier, artificial barriers were placed before the development of the country, which reduced the opportunities for youth, women and farmers, he said, in an apparent attack at the Congress and its allies.

However, this situation is changing now due to continuous efforts of the NDA, he said.

After fulfilment of basic needs, now this decade is of fulfilling the aspirations of Bihar, Modi said.

Every constituent of the NDA looks forward to working with full devotion to fulfil these aspirations, he said.

Taking Bihar from shortcomings to aspiration is a very big achievement for the NDA government, Modi asserted.

"Whether it is providing pucca houses to the poor, building toilets in households, providing tap water in homes, providing electricity, gas connections, connecting the poor to banks --all of this has been possible due to the power of the votes of the people of Bihar," Modi said.

Noting that the expectations and aspirations of sisters and daughters of Bihar are also increasing continuously, Modi said that when they got toilet facilities, they realized the importance of security.

Their troubles subsided when they got a house in their name under the Prime Minister Housing Scheme, he said.

Over the last few years, the NDA has provided complete protection from pregnancy to old age, Modi said, pointing out that even the poorest families in Bihar are now able to get treatment for serious illness anywhere in the country for free.

The efforts of the central government regarding 'JAL Shakti' are also attracting people to the NDA and the coalition is determined to fulfil the dream of 'Har Ghar Jal' (water in every household), he said.

This will bring a huge improvement in the standard of living of millions of people, especially women, he noted.

From engineers and doctors to the street vendors, everyone is doing their work free from any fear, Modi said.

"Today, when the people in Bihar are busy in fulfilling the resolve of a self-reliant Bihar, there is a solid foundation behind it of the public welfare schemes of the NDA government," he said.

Noting that Bihar has heartily welcomed the decision of education in mother tongue, Modi said this step will open doors of new opportunities for talented youth.

The final phase of Bihar polls is on November 7, followed by counting of votes for all 243 seats on November 10.

Modi has addressed a number of poll rallies in the state.