Hyderabad gears up for massive march to seek Telangana

Hyderabad is getting ready for yet another show of strength by the supporters of a separate Telangana state.

Lakhs of people are expected to respond to a call given by the Telangana Joint Action Committee to attend the Sagara Haaram March on Sunday afternoon.

The march has the support of several political parties including the Telangana Rashtra Samiti, the Bharatiya Janata Party, Communist Party of India, Telangana Nagara Samiti and Congress Members of Parliament and ministers from Telangana region. The government has permitted the TJAC to hold the march from 3 to 7 pm.

Though the government has granted permission for the march at the last minute, organisers have alleged that the police are continuing to make large-scale arrests in Telangana districts to prevent people from coming to Hyderabad in large numbers.

TJAC convenor Professor Kodanda Ram on Saturday alleged that the police and the government were trying to scuttle the programme by rounding up people and threatening them.

"This should stop immediately," he said, adding that pro-Telangana leaders have already assured the government that the event will be peaceful. He said that there was still no clarity on the route people can take to reach the venue of the march.

BJP and CPI leaders have also alleged that obstacles were being created to discourage the people from going to Hyderabad. BJP leader G Kishan Reddy has announced that at least 25,000 members of the party will be participating in the march.

TJAC, Congress MPs and many other parties have also appealed to the people of Telangana to make the event a successful one and turn it into the biggest ever show of strength in support of Telangana.

"Our march will be peaceful and it will make clear to the central government that nothing less than a separate Telangana will be acceptable to us," said Ghaddar, a popular folk singer.

MPs and ministers from Telangana held a meeting and discussed the measures to make the event successful. The police had initially resisted the idea of allowing the march in view of the violence during the Million March held last year.
During the Million March, police had arrested all the leaders of the Telangana movement and their supporters had gathered near the Hussain Sagar Lake, without any command or control.

"This time we have taken the responsibility of maintaining order," said Kodanda Ram.

The Telugu Desam Telangana Forum has said that it is supporting the march, but as the TJAC has not invited them, they will organise a separate protest programme at the Martyr's Memorial on Sunday afternoon.

Meanwhile, the Congress leadership was still giving out conflicting signals about its thinking on the demand for a separate Telangana state.

After party general secretaries Vylar Ravi and Ghulam Nabi Azad tried to play down the gravity of the situation by making jokes about the Telangana stir, a senior Congress leader said there was nothing wrong in having two Telugu speaking states.

He said the Congress central leadership will soon take a decision on the Telangana issue.

But the government's decision to allow the Telangana march in Hyderabad has triggered protests in Andhra and Rayalaseema region.

The United Andhra Pradesh Students Joint Action Committee has announced an 'Organise Chalo Hyderabad' programme on Sunday. Meanwhile, the police in Tirupati foiled the attempt of a group of students to board a train for Hyderabad to attend the programme and arrested 50 of them. 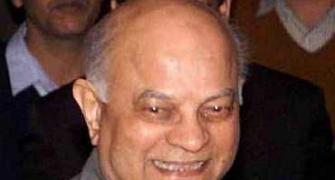 Brajesh Mishra, India's first NSA, as I knew him
Firms made fraudulent claims to get coal blocks: CBI