The counting of votes in the high-stakes Hyderabad civic poll would be taken up on Friday. 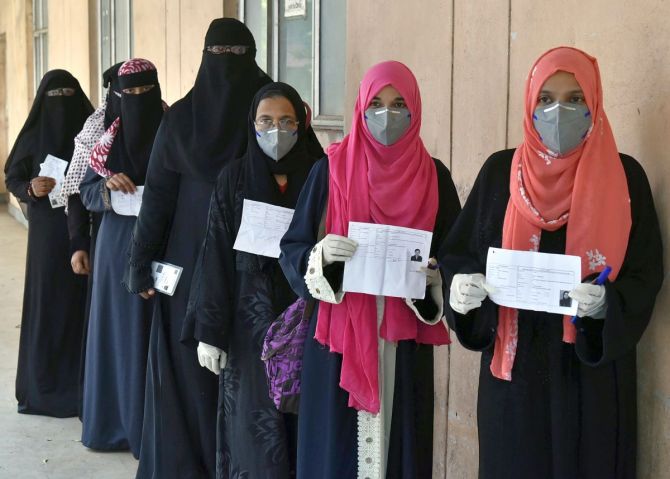 Though the run-up to the poll saw a high pitched campaign s, the turnout of voters on December 1 was an unimpressive 46.55 per cent (34.50 lakh) out of the total 74.67 lakh voters.

Elaborate arrangements have been made for the counting process which would begin at 8 am on Friday.

Counting centres have been set up at 30 places and the total number of personnel engaged in counting is 8,152, official sources said on Thursday.

The entire counting process would be recorded with CCTV cameras installed at every counting table, they said.

Ballot papers were used for the poll and consequently, the results are likely to be known only in the evening or in the night.

The Telangana state Election Commission had decided to conduct the election with ballot papers after obtaining the views of major political parties, health department in view of COVID-19.

The lead up to the polling witnessed a vociferous campaign by the parties.

Bolstered by its victory in the recent bypoll to the Dubbak assembly constituency, the Bharatiya Janata Party conducted a spirited campaign to win the Greater Hyderabad Municipal Corporation polls to boost its chances in the 2023 assembly polls.

It has drafted its General Secretary Bhupendra Yadav, who has been its in charge for Bihar, to supervise the poll preparations in Hyderabad.

The BJP highlighted the Telangana Rashtra Samithi's 'alliance' with the All India Majlis-e-Ittehadul Muslimeen and sought votes to provide clean and transparent administration in the city.

The TRS denied any alliance with the AIMIM.

The state's ruling party deployed several state ministers and legislators for canvassing in the city.

The Congress's poll battle was led by state party President N Uttam Kumar Reddy and Working President A Revanth Reddy (both MPs) and other senior leaders.

The Telugu Desam Party, once a major force in the state, sought to revive its fortunes highlighting the development witnessed in the city, including in the IT sector, during Nara Chandrababu Naidu's regime as chief minister in undivided Andhra Pradesh.

The TRS and BJP leaders were engaged in a war of words.

The BJP's Telangana president and MP Bandi Sanjay Kumar found himself in a row following his comments that his party would conduct a 'surgical strike' in the old city of Hyderabad, if necessary, to send away Rohingya and Pakistanis after it wins the post of mayor in the polls.