Abdul Wasey Mirza, a 23-year-old unemployed youth who became the victim of a terror attack for the second time on Thursday during the Dilsukhnagar twin blasts, has been questioned by police which is not treating him as a suspect.

"As part of the investigations we only recorded his statement as a witness along with others," Hyderabad Police Commissioner Anurag Sharma told PTI.

When asked if Wasey was being treated as a suspect in the case, he said, "Nothing like that."

A section of the media claimed that Wasey's role in the twin bomb blasts was being suspected and that he was "grilled" by the police.

Wasey sustained severe injuries in the Mecca Masjid blast in May 2007 and it was a quirk of fate that he suffered injuries in the Dilsukhnagar blast as well. He is currently undergoing treatment at the Yashoda Hospital at Malakpet in Hyderabad.

Both Cyberabad and Hyderabad police have questioned some local youths to obtain clues in the blasts case.

"Media reports that we have detained some persons are totally baseless. We only called some people for questioning, which is a normal investigating procedure," a top police official said.

Informed sources said the NIA men also questioned some of those persons to establish possible links to the twin blasts case. Cyberabad and Hyderabad police have gone through the video footage captured by closed-circuit cameras at the Dilsukhnagar bus stand.

"We are still analysing the details," the police official said. 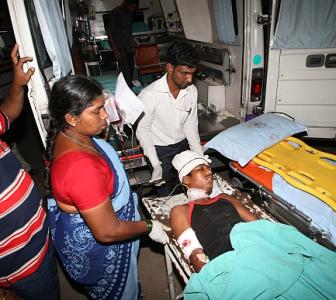