Even as Home Minister Sushilkumar Shinde visited the Dilsukhnagar area blast site at Hyderabad on Friday morning, investigators are struggling to find clues.

The twin blasts in Hyderabad on Thursday evening claimed 14 lives and left 119 injured, of which six are critical, said Shinde.

While teams of the National Security Guards and the National Investigation Agency scan the site for clues, the biggest drawback for investigators is the lack of proper CCTV footage.

Two of the cameras at the site were not functioning and the Hyderabad police are still looking for description of the culprits who planted the bombs. NIA sources informed that they are trying to get CCTV footage from some of the establishments near the blast site. Some of the evidence at the site has been lost following the chaos after the blasts. The police had to resort to a mild lathi- charge after the incident in order to clear out the area.

Currently, there is a massive police presence at Dilsukhnagar and the entire area has been cordoned off. NIA sources say that the material used in the blast is being collected from the site and would be sent for forensic examination.

There are traces of ammonium nitrate and IEDs used to trigger the bombds were of superior quality. The bombs, which were packed in tiffin boxes, were made by an expert and timed to perfection. The explosives were similar to the ones that were used in the Pune blasts in August last year, but clearly the one at Hyderabad was better assembled. The timer device too was perfectly placed unlike Pune, NIA officials pointed out.

”We will be questioning many persons including some Indian Mujahideen operatives, who have been arrested in the recent past. We also have gathered a list of at least 20 eyewitnesses, who would be questioned during the course of the day. We are hoping to get a better description of the incident,” an NIA official at the blast site said. 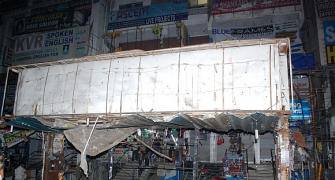 Had sounded a terror alert on Tuesday: Centre