The wife of Vikas Sachdev, arrested for allegedly molesting actor Zaira Wasim on board a Delhi-Mumbai flight on December 9, on Monday claimed her husband, before deboarding, had "apologised" to the teenager to which she said it was "okay". 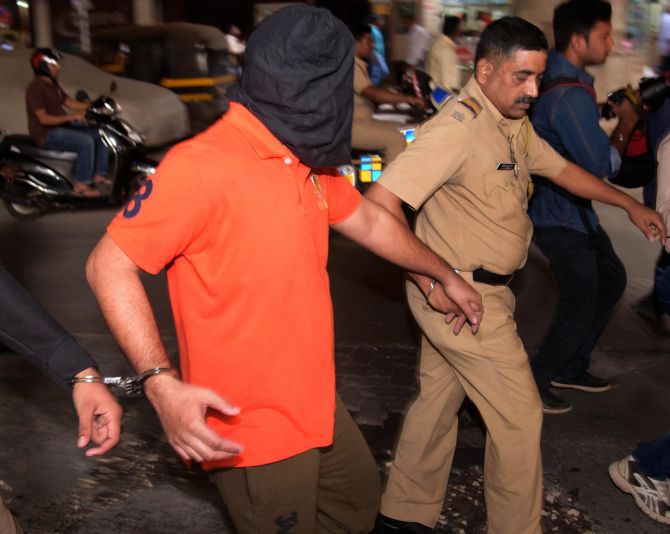 She claimed that her husband's leg had accidentally touched the actor.

Sachdev, a resident of suburban Chandivli, was arrested on Sunday after a huge public outcry over the incident prompted the Maharashtra State Commission for Women to seek an inquiry into the "shameful" incident.

He was booked for assault or criminal force to woman with intent to outrage her modesty, and relevant sections of the Protection of Children from Sexual Offences Act as the actor is a minor.

Sachdev's wife Divya interacted with reporters on the premises of the sessions court at Dindoshi in suburban Goregaon after he was remanded in police custody till December 13.

Divya Sachdev claimed her husband had apologised to the actor before deboarding at the Mumbai airport "to which she said it was okay".

"My husband is a family man. He is innocent. He was mentally exhausted as he was returning after attending the funeral of his uncle (in Delhi).

"He was taking rest and was fast asleep when his leg accidentally touched the girl. Vikas apologised to the actor before getting out of the plane to which she said it was okay," she claimed.

The Dangal actor, who had narrated her ordeal on the Vistara flight from Delhi to Mumbai on Instagram, had said that a passenger sitting behind her put his feet on her armrest.

"So, I was in a flight travelling from Delhi to Mumbai today and right behind me one middle-aged man who made my two-hour journey miserable. I tried to record it on phone to understand it better because the cabin lights were dimmed, I failed to get it..." she said.

"The lights were dimmed, so it was even worse. It continued for another five to ten minutes and then I was sure of it. He kept nudging my shoulder and continued to move his foot up and down my back and neck," the Kashmiri teen, who shot to fame for her stellar performance in Aamir Khan's blockbuster Dangal, said in the video.

"This is not done, I am disturbed... Is this how you're going to take care of girls? This is not the way anybody should be made to feel. This is terrible!" she said.

"No one will help us if we don't decide to help ourselves. And this is the worst thing," she added.

When asked if any official from the airlines got in touch with them, Divya Sachdev said her husband had told the cabin crew not to disturb him for anything during the flight as he wanted to take rest.

She also alleged that the police lied about the timing of her husband's arrest.

As per the remand copy produced by the police in the court, Vikas Sachdev was arrested at around 9 pm on Sunday.

The woman, however, claimed that her husband was actually picked up from their residence (in Chandivali) at around 12:30 pm on Sunday and that she can produce the CCTV footage from the building cameras to prove her claim.

"It was only at 4.30 pm that we came to know that the actor had filed a case against my husband," she said, adding that she had full faith in judiciary and hoped to get justice.

Vikas Sachdev currently works as a regional manager at Sun Broadcast in Mumbai.

Air Vistara had said that it had "zero tolerance towards such behaviour" and was looking into the complaint.

Terming the incident as "shameful", Maharashtra State Commission for Women's chairperson Vijaya Rahatkar had said they would seek a detailed inquiry into it from the Directorate General of Civil Aviation.