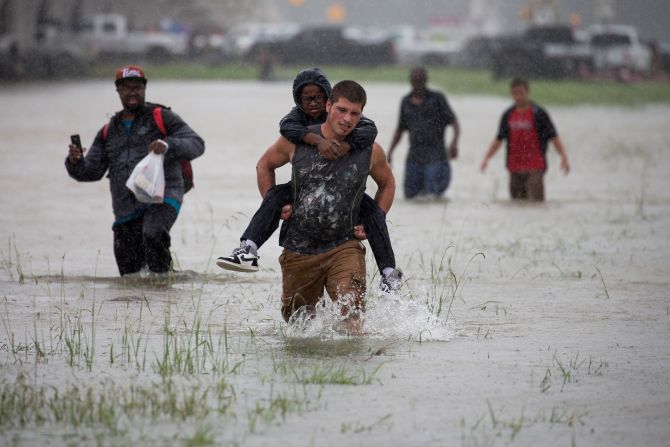 First responders took to boats to rescue stranded residents, with authorities warning that more than 30,000 people across the region could be forced from their homes by the time skies are expected to clear later this week.

A family of six is believed to have died after drowning in a white van while trying to escape the floods.

The passengers included four children. The driver reportedly called out to them to try to get out through the back door, but they were unable to escape.

Witnesses said first responders were in the area, but were unable to rescue the passengers. It is thus far the single deadliest incident resulting from the storm.

A 60-year-old woman died Monday in Porter, a small community north of Houston, when a large oak fell on her mobile home.

Another person died in the small coastal town of Rockport, near where Harvey made landfall. A 52-year-old homeless man was found in La Marque, a small city near Galveston.

Two Indian students are in a critical condition after they nearly drowned in Lake Bryan in the US state of Texas. 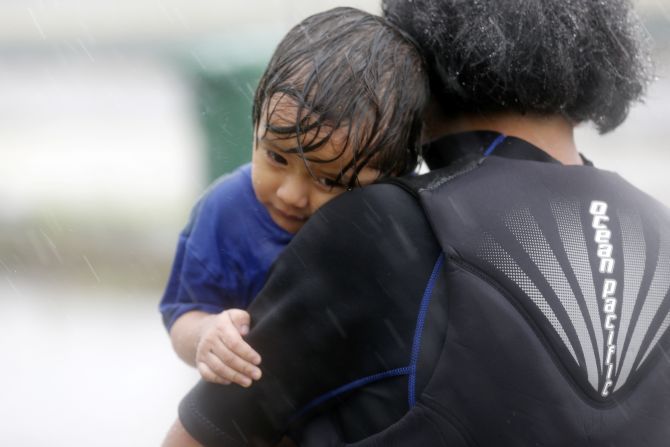 IMAGE: A woman carries a child while migrating to a safer place in Beaumont Place, Houston.
Photograph: Jonathan Bachman/Reuters

As the rain kept pouring, as many as 13 million people from Houston to New Orleans were under flood watches and warnings. Many residents climbed to the upper stories of their homes. Some even pitched tents on roofs, waiting it out until a boat or helicopter swooped in.

“Harvey has in many ways turned southeast Texas into an inland lake...the size of Lake Michigan,” said Brad Kieserman, vice president of disaster operations and logistics for the American Red Cross.

According to the National Weather Service (NWS), residents can expect another 24 inches of rain, the return of tropical storm force winds and high flood waters.

The NWS has issued flood watches and warnings from near San Antonio to New Orleans, an area that is home to more than 13 million people. Schools, airports and office buildings remained closed.

Houston Mayor Sylvester Turner said that there are already 5,500 people in shelters and that number is expected to rise.

Harvey’s onslaught is predicted to continue for the next few days, as the storm swirls around the southeastern US coast, briefly heads offshore and then makes another landfall. 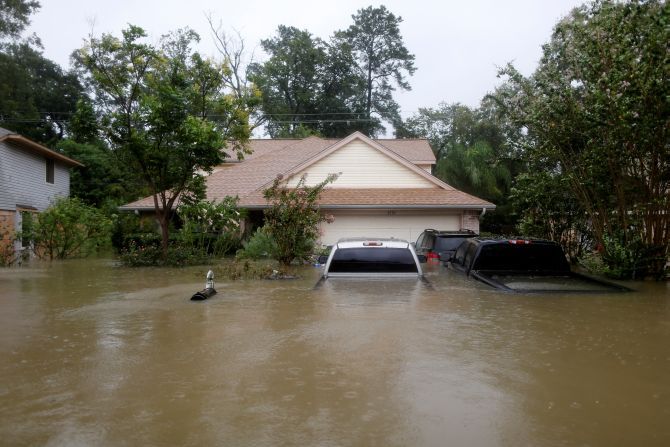 In addition, 16 aircraft are conducting day and night wide area search and rescue missions along the Texas coast from Corpus Christi to Houston.

Texas is at the early stages of turning back on power -- restoration of power is one of its biggest needs.

Desperate residents have taken to social media to plead for help, posting images of their families stranded at home as flood waters quickly rise.

President Donald Trump on Monday declared ‘emergency conditions’ in Louisiana, where forecasts have called for as much as two feet of rainfall in some areas.

He pledged swift action by the federal government to provide relief to states affected by Harvey, and he is scheduled to visit Texas.

“Recovery will be a long and difficult road, and the federal government stands ready, willing and able to assist in that effort,” he said.

The immediate focus for many remained Houston, the country’s fourth-largest city and a sprawling metropolitan area, which faced dire circumstances and National Weather Service forecasts warning of more heavy rainfall.

Two reservoirs were opened to release water to relieve the stress the downpour has caused in the region, which has seen as much rain in a few days as it averages in an entire year. 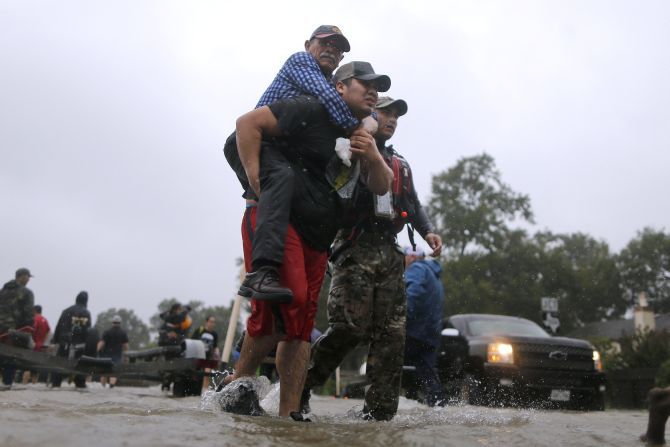 IMAGE: An elderly man is carried after being rescued from the flood.
Photograph: Jonathan Bachman/Reuters

Parts of Harris County, which encompasses Houston, were pelted with 30 inches of rain in the past 72 hours, the Weather Service reported early Monday.

Officials said Houston, a major center for the nation's energy industry, had suffered billions of dollars in damage and would take years to fully recover.

Oil and gas companies have shut down about a quarter of their production in the Gulf of Mexico.

Spot prices for gasoline are expected to jump, but the full extent of damage will not be clear for days, companies and experts said.

More than 100,000 Indian-Americans living in and around Houston area have also been badly hit by the monstrous hurricane Harvey.

The community members living in and around Houston have either voluntarily abandoned their homes or have been evacuated to safer places, after flood water dangerously entered their homes, in a few cases touching the roof.

Hundreds of Indian students, who were stranded in their homes and ran out of food, are being helped by the Indian Consulate in Houston.

Seema Hakhu Kachru
© Copyright 2020 PTI. All rights reserved. Republication or redistribution of PTI content, including by framing or similar means, is expressly prohibited without the prior written consent.