News
Business
Movies
Sports
Cricket
Get Ahead
Money Tips
Shopping
Sign in  |  Create a Rediffmail account
Rediff.com  » News » How to ensure your child's safety at school

With many schools abdicating their legal and ethical responsibilities towards students, Avantika Bhuyan lists down things to keep in mind for your child's security Days after the rape of a 6-year-old girl by two gym instructors at a school in Bangalore, there was more shock in store for parents of schoolchildren in the city.

Several schools sent out forms stating they could not be held responsible for loss of property and life of the child on the school premises.

Rathi Rao (name changed on request), mother of a 7-year-old girl, received one such form to sign.

It stated: "In consideration of my child's participation in various events organised by the school, I hereby release the management, officers, employees and agents of the school, its parent and sister concerns and any other people officially connected with the events from any and all liability for damage to or loss of personal property, sickness or injury from whatever source, legal entanglements, loss of life or money, which might occur while the child is participating in the event."

The document was withdrawn after over 100 parents met the principal.

"What the paper meant was that during events like excursions, the school would take care of the students, but if the child didn't listen and injured himself the school would not be responsible," says Rao. The parents suggested instead that they could sign consent forms for each trip or event instead of a general disclaimer. "The language - that the school is not responsible for loss of life - was unacceptable. But I am glad the principal was considerate to our point of view," says Rao.

Incidents such as these have prompted parents to question the legal responsibilities of a school.

"Parents know little about the legalities around the security of a child within the school. But the recent happenings have made me want to understand this aspect better," says Bangalore-based documentary filmmaker Padmalatha Ravi, whose 5-year-old daughter studies in the Earth School. According to Aditya Sondhi, senior advocate, High Court of Karnataka, getting consent papers signed by the parents does not decrease the legal duty of the school to provide a safe and secure environment to the child. The school continues to be liable in tort (civil) law in case of any shortcomings, in the discharge of this duty.

"According to the UN Convention, the child is in constant need of protection; he or she can never be outside anyone's guardianship," says Amod Kanth, former chairperson of the Delhi Commission for Protection of Child Rights and founder secretary of the NGO Prayas.

"If you enlarge the scope of this definition, at home, he or she is the guardian's responsibility, and at school, the child is the institution's responsibility. Sending out forms like these is blatantly illegal."

What are the laws that safeguard a child's interests at school? If a school's staff member is found guilty of a sexual offence then he or she can be reported under The Protection of Children from Sexual Offences Act 2012 and the Indian Penal Code.

"And if such incident happens on account of negligence on part of the management, the school can be liable for damages," says Sondhi.

He also says that if any member of the institution was aware that the safety of the child was being threatened on the premises -- be it through ragging, bullying, sexual abuse, corporal punishment or injury -- and didn't report it, or that the school didn't cooperate with the police and tried to destroy evidence, a case of negligence (and related offences) can be filed against the school officers.

"The Juvenile Justice Act can also be applied in some cases," adds Kanth. 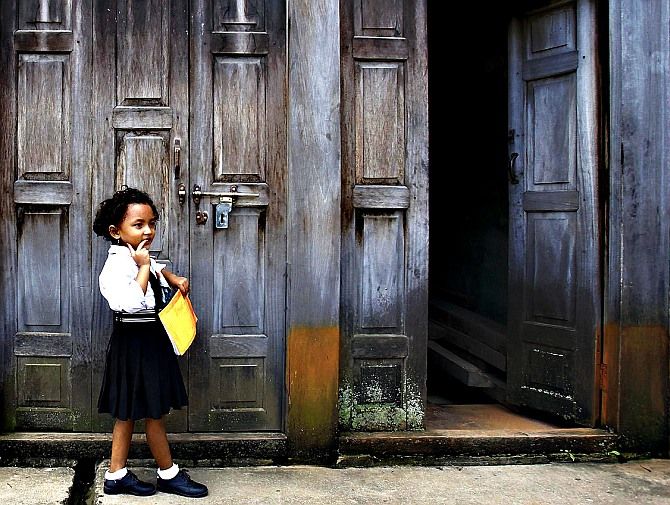 Educationists believe that a child's security can't be ensured by external devices like CCTV cameras but by an internal culture created by the school authorities.

"From the time they get on the buses at 7.30 am till they leave at 1.45 pm, we are responsible for their mind, heart and bodies," says Jyoti Bose, principal, Springdales School in Delhi's Dhaula Kuan.

So here's what schools should do: check the antecedents of the staff, get a thorough police verification done, and make the staff aware of their responsibility towards the child.

"No child should be left alone in the classroom, male staff shouldn't be hanging around the classes unnecessarily, and no vendor should have access to the children," says Gowri Ishwaran, the founder-principal of Delhi's Sanskriti School.

The school has to account for the presence of each and every stranger in the school by issuing ID cards.

And if the child's security is threatened by a temporary staff member, a vendor or a stranger, it becomes the school's responsibility.

"When we engage coaches, we look at the age group and the sport they will teach, and whether it requires them to touch the body. Adequate supervision needs to be in place," says Bose.

Frequently, the definition of a school's legal responsibility gets hazy.

Says Sumit Vohra, founder of the online forum admissionsnursery.com that has 75,000 families from Delhi as members: "When a child falls while skipping down a school's staircase that is in perfectly good condition, the school is not liable. But if the child suffers a fall because the staircase is in need of repairs, the authorities were aware of this and hadn't got it repaired, then they are liable."

Similarly, if the cafeteria is serving meals that are unfit to be consumed, then the school is legally responsible.

Any incident in an official school bus is the school's responsibility, but not if the incident takes place in a private vehicle engaged by the parents.

Also, the culpability of the school depends on the institution's response to the incident -- whether it tries to take onus and cooperate with the investigation or tries to hush up the incident. Activists and parents feel that it should be mandatory for schools across the country to have a child protection policy, or CPP, in place.

As of now, CPP has been adopted only by the state of Delhi, based on the guidelines of the Delhi Commission for Protection of Child Rights.

The policy states: a CCP is a statement of intent that demonstrates the commitment to safeguarding children from harm and makes clear to all in an institution and who come into contact with it what is required in relation to the protection of children, and that child abuse in any form is unacceptable.

It consists of child safe practices that protect children from harm, abuse, neglect and exploitation in any form.

Child abuse means any form of maltreatment inflicted on a child including physical abuse, sexual abuse and emotional abuse.

"In case of a violation of the policy, an investigation is conducted and the erring employee may face dismissal," says Shireen Vakil Miller, advocacy director at NGO Save The Children.

In case of a violation of the policy, an investigation is conducted and the erring employee may face dismissed.

WHAT YOU CAN DO

In case of injury or loss of life due to negligence of the school, here's what you can do:

* File an FIR with the police. Earlier this month, a 12-year-old girl in Kanpur committed suicide after a woman teacher made her remove some clothes and stand in that state for two hours. The reason? A mobile phone had been found in her bag. The family members demanded immediate arrest of the accused and the police registered an FIR on the basis of this complaint.

* Seek the intervention of the jurisdictional courts to direct the school to adhere to its obligations.