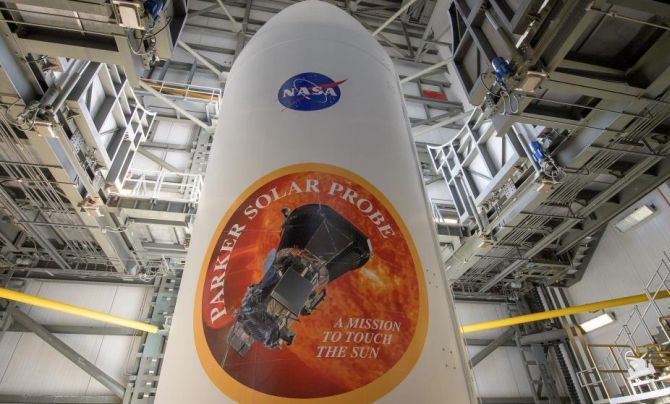 Mankind's first mission to 'touch' the Sun may have panned out differently had it not been for Indian-American astrophysicist Subrahmanyan Chandrasekhar, whose intervention made it possible for a research paper proposing the existence of solar wind to get published 60 years ago.

The unprecedented sun-skimming probe that lifted off on Sunday from the United States is set to study the 'solar winds' proposed in the paper by Dr Eugene Newman Parker, who has now become the first living scientist to have mission named after him.

National Aeronautics and Space Administration's Parker Solar Probe, which will fly closer to the Sun that any other spacecraft has attempted before is set to explore the corona, a region of the Sun only seen from Earth when the Moon blocks out the Sun's bright face during total solar eclipses.

Back in 1958, when the 31-year-old Parker suggested that the charged particles streamed continuously from the Sun and fill up the space, the scientific community refused to believe him.

The prevailing opinion at the time was that the space was total vacuum.

"When he submitted his paper detailing his theory to the Astrophysical Journal, the most prominent research journal of the field, it was rejected twice by two different reviewers who were asked to provide opinions," Dibyendu Nandi, an associate professor at Indian Institute of Science Education and Research, Kolkata, told PTI.

"The Senior Editor of the Astrophysical Journal intervened and overruled the reviewers and allowed the idea to be published. That Editor was the Indian-American astrophysicist Subrahmanyan Chandrasekhar," said Nandi, who is also the chairman of the Working Group on Solar-Stellar Environments of the International Astronomical Union (IAU).

"Chandra, as he was popularly known, is another astrophysicist with his name tagged to a space mission, NASA's Chandra X-ray Observatory," Nandi said.

Chandrasekhar was awarded the 1983 Nobel Prize for Physics with William A Fowler for studies of the physical processes of importance to the structure and evolution of the stars.

"My PhD research supported an alternate theory for the Sun's magnetic cycle, different from a theory that had been proposed earlier by Parker," Nandi recalls.

"Eugene Parker had the vision to recognise the possibilities discussed in my thesis, and the magnanimity to write a glowing review of a thesis for an unknown student from a far away country -- a PhD thesis that contradicted one of his own theories," he said.

"I have learnt a very important lesson of my professional scientific career from him: to be generous to the ideas of others, as long as they are not obviously wrong, and even if they contradict my own personal views," he said.

A mission like Parker Solar Probe has been a dream of scientists for decades, but only recently has the required technology -- like the heat shield, solar array cooling system, and fault management system -- been available to make such a mission a reality.

The car-sized spacecraft will travel directly into the Sun's atmosphere, about four million miles from its surface -- and more than seven times closer than any spacecraft has come before, thanks to its innovative Thermal Protection System.

The $1.5 billion mission will perform the closest-ever observations of a star when it travels through the Sun's outer atmosphere, called the corona.

It will make 24 passes through the corona during its seven-year mission.

The mission will rely on measurements and imaging to revolutionise our understanding of the corona and how processes there ultimately affect near-Earth space.

Mohana Basu in New Delhi
© Copyright 2023 PTI. All rights reserved. Republication or redistribution of PTI content, including by framing or similar means, is expressly prohibited without the prior written consent.