Shortly after the Union Budget was announced, political leaders from across the spectrum reacted to it.

Here’s what some of our leaders said. 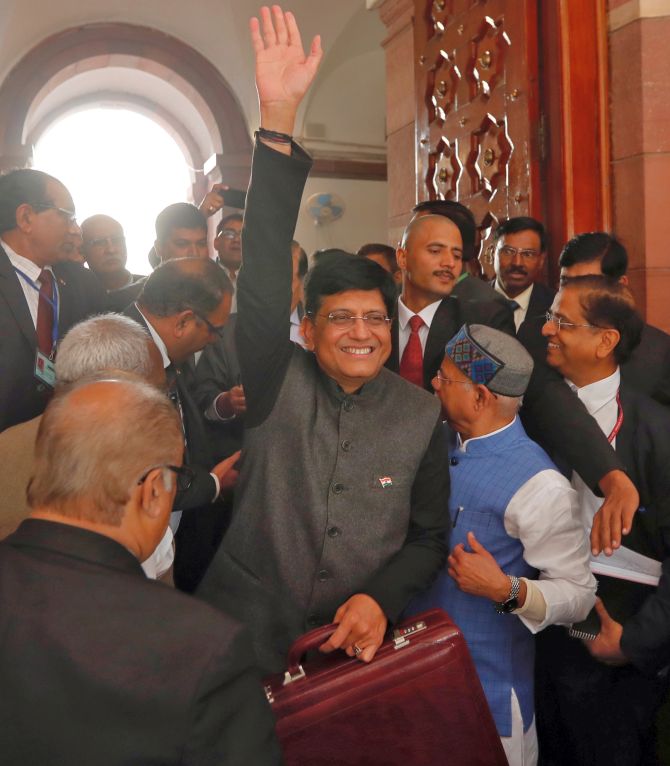 IMAGE: Interim Finance Minister Piyush Goyal waves as he holds his briefcase upon his arrival at Parliament to present 2019-20 budget. Photograph: Adnan Abidi/Reuters

“The Budget has proved that the Modi government is dedicated to the aspirations of the country's youths, farmers and poor. It will spur growth, generate employment and also provide relief to the middle class, farmers and poor workers among others.”
-- Amit Shah, BJP president

"The government's decision to exempt income of up to Rs 5 lakh from tax will benefit the ‘great Indian middle class’. This will strengthen the purchasing power of the middle class which holds the key for India's future."

"Dear NoMo, 5 years of your incompetence and arrogance has destroyed the lives of our farmers. Giving them Rs. 17 a day is an insult to everything they stand and work for"

“Promises made by the BJP in this budget are mere poll sops and jumlas, which will not be fulfilled as the BJP has a mandate to rule only till May this year. I would term today’s budget as BJP’s election manifesto. This is all being done for elections. I directly charge them of paying bribe to voters.”

"Our government wants the country's economy to get stronger and that was aim of the Budget. I would call it a historic Budget. It would benefit all sections of society."

"The whole exercise has turned out to be a damp squib. We’ve seen one good thing that is tax exemption for the middle class. A Rs 6,000 in income support for farmers boils down to Rs 500 per month. Is that supposed to enable them to live with the honour and dignity?"
-- Shashi Tharoor, Congress leader

"My one line comment on the budget is that it was not a 'vote on account' but an 'account for votes'. It was not an interim budget. It was a full-fledged Budget accompanied by an election campaign speech. By doing so, the government has trampled on time-honoured conventions."
-- P Chidambaram, Congress leader

“Heartiest congratulations to PM Narendra Modi, Arun Jaitley and Piyush Goyal. This budget is for the welfare of every section of the society as per our mission of ‘Sabka Saath Sabka Vikas’. By increasing taxable income to Rs 5 lakh, the household income of middle class will further improve. FM has also targeted to rejuvenate all the leading rivers of India within next 10 years. We are confident to complete it within the given timeline.”

"This is the second surgical strike. First surgical strike was when our soldiers fought with bullets at the border and it will be the ballot this year. The Budget will benefit farmers"

"Who will implement this (interim budget)? Will the new government that will come into being implement this budget? Before election a vote on account is placed. The BJP government does not have any moral right to place such (budget) announcement.... Why did they not announce a single agenda for farmers in the last four years?"

"I welcome the tax benefits planned for middle and lower income groups and the direct benefit transfer proposed for small and marginal farmers on the line of Odisha's KALIA scheme. However, it would have benefited the farmers more if the quantum of assistance is equal or more than our KALIA scheme which is Rs 10,000 per year. There is nothing for landless poor, share croppers and farmers in distress. I will give 2.5 out of 10 to this interim budget."

"The budget is anti-youth and misleading for all sections of society, including farmers. This is nothing by an election jumla"

"I welcome this interim budget and express my gratitude towards the prime minister and his cabinet colleagues on behalf of the people of Gujarat. This budget has offered relief to each section of the society, be it farmers, women, youths or tax payers"

"Final jumla of Modi govt: it's interim budget too completely disappoints Delhi. Our share in central taxes remains frozen at Rs 325 crore & nothing earmarked for local bodies. Delhi continues to be on its own financially. 1. Invest heavily in edu n health 2. Increase min wages n enforce it 3. Give crop prices 1.5 times cost 4. One time farm loan waiver. This wud put money in pocket of poorest, create demand, give boost to economy n create jobs. None of it done in budget (sic)."