News
Business
Movies
Sports
Cricket
Get Ahead
Money Tips
Shopping
Sign in  |  Create a Rediffmail account
Rediff.com  » News » How many students dropped out over hijab ban, SC wants to know

How many students dropped out over hijab ban, SC wants to know

The Supreme Court on Wednesday asked whether there is any authentic figure regarding the dropping out of students from educational institutions in Karnataka because of the hijab ban and the subsequent judgment by the high court on the issue. 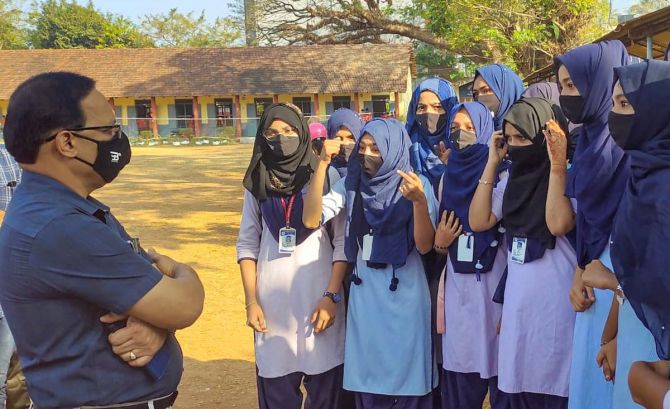 IMAGE: A faculty member talks with students wearing the hijab, after the school authorities denied them entry for wearing a hijab or scarf, in Kundapura of Udupi district, Karnataka. Photograph: PTI Photo

"Do you have those authentic figures that because of this hijab ban and the subsequent judgment of the high court, 20, 30, 40 or 50 students have dropped out?" a bench of Justices Hemant Gupta and Sudhanshu Dhulia asked after the counsel appearing for one of the petitioners raised the issue of students, especially girls, dropping out of school.

Senior advocate Huzefa Ahmadi, representing one of the petitioners, referred to a report and said it has testimonies of several students.

"My friend (one of the lawyers) informed me that 17,000 students had really abstained from the exams after this particular judgment," he said to the bench hearing arguments on a batch of pleas challenging the Karnataka high court verdict refusing to lift the ban on hijab in educational institutions of the state.

Ahmadi said the effect of the government order in the matter would be that girls, who were earlier going and taking secular education in schools, will be forced to go back to madrasas.

"Why should someone feel that one religious observance will obstruct in any manner legitimate or secular education or unity? Why should anyone get provoked if someone wears a hijab and goes to school? Why should other students have a problem?" he said.

Senior advocate Rajeev Dhavan, appearing for another petitioner, argued that one of the most important parts of this case is that a person wearing a hijab cannot be discriminated against on the grounds of religion and sex.

The bench observed that it does not go by what is written in the newspapers.

Dhavan argued that across India and in the entire world, whether it is an Islamic state or otherwise, hijab is recognised as valid.

He said if according to the tenets of the faith, something is being done in a particular way and it is bona fide, then that has to be followed.

Arguing that this is not a simple case of discipline, Dhavan said what is the justification, ocular or otherwise, to say that hijab is opposed to public order.

"There is none," he said, adding that there is a campaign that hijab must go.

"This is not a 'yes', 'no' issue. This is not an issue where you say we have a disciplinary code, follow it. What are the obligations on the authority concerned to bring a measure of inclusiveness as far this is concerned and to apply the least restrictive approach," he said.

"It is probably targeting Muslims and Muslim women in particular and therefore contrary to Articles 14 and 15. And this kind of targeting without any sensitivity is contrary to law and the Constitution," Dhavan said.

When he said that today, there is a lot of discontent in the majority community to knock down whatever comes by way of a claim in the name of Islam and cited the example of cow lynching, the bench observed, "You will be well advised to confine to this case rather than others."

Ahmadi said if a woman chooses to wear a hijab, why should that provoke anyone else?

"And if it does, you have to actually address that. Because otherwise, you are effectively allowing someone to be bullied," he said.

Ahmadi argued that to say one would not tolerate someone wearing hijab, is completely contrary to the spirit of fraternity as enshrined in the Preamble.

"The GO (government order) does not say no hijab," the bench observed.

When Ahmadi argued about the dropout of students, the bench said this argument has been raised at this stage and it was not part of the petition filed earlier before the high court.

"It is not a legal question, it is a factual question. Whether there is a dropout,  dropout rate of girls or the boys. What is the age group? These are all factual," the bench said.

Ahmadi said, "We all know why a person wears a hijab. There is a level of conservativeness in those families".

Referring to the National Education Policy, he said the legitimate state interest should be to promote education.

"Does public interest lie in enforcing discipline or does it lie in promoting education? And what is the degree of discipline which is compromised by allowing someone to hear a hijab," he said.

"It is that balance that your lordships will have to strike and the state will also have to strike," he told the bench during the arguments which would continue on Thursday.

The state government's order of February 5, 2022, by which it had banned wearing clothes that disturb equality, integrity, and public order in schools and colleges, was referred to in the apex court.

Several pleas have been filed in the top court against the March 15 verdict of the high court holding that wearing of hijab is not a part of the essential religious practice which can be protected under Article 25 of the Constitution. 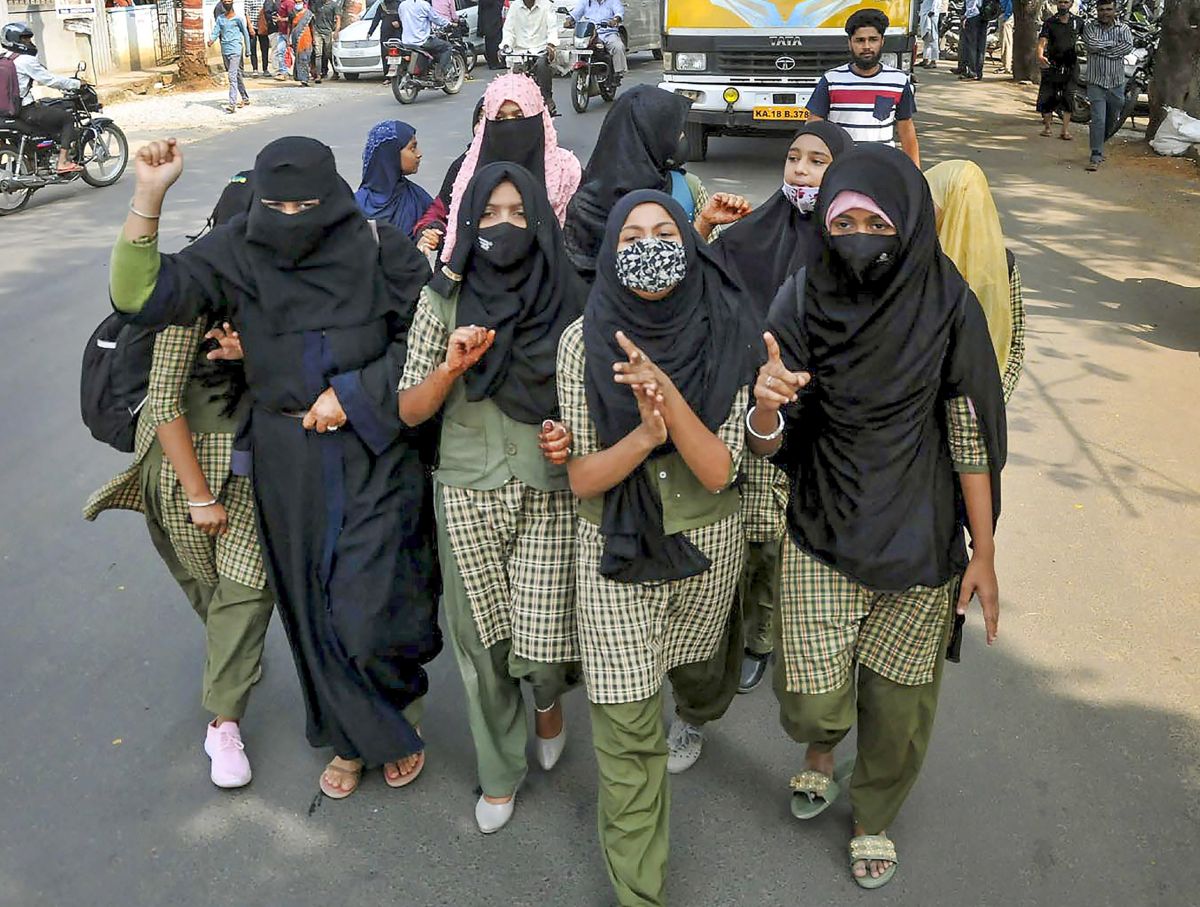