The tragic bus accident in Palakkad a day ago which claimed nine lives, including five students who were part of a school excursion on a private bus, prompted the Kerala high court on Thursday to issue directions against plying of contract carriages which flout norms and reckless driving on the roads. 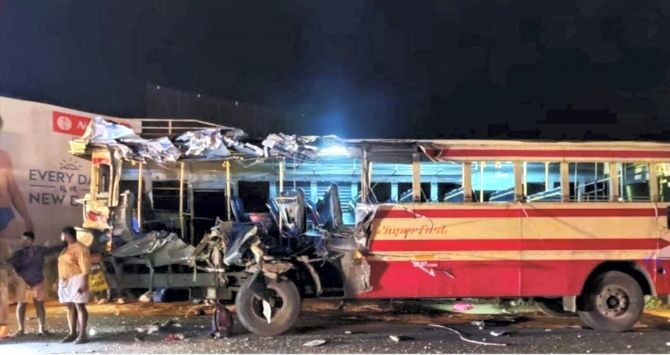 While a division bench directed action against contract carriages which violate safety standards and sought details of vloggers who promote use of such vehicles, a single judge said the deleterious element of reckless driving needs to be addressed to prevent the roads from turning into "killing fields".

The bench, in the morning, took up the accident issue after noticing that the tourist bus which the students were travelling in was violating various safety standards as well as the court orders against use of LED or laser or neon lights, high-power audio systems, graphic designs on the vehicle body and multi-toned horns.

The bench of Justices Anil K Narendran and P G Ajithkumar also noted that despite its orders against the use of such vehicles, especially to ferry students, various vloggers were posting videos on YouTube and other online platforms promoting contract carriages with unauthorised fittings and high-power audio system, among others, flouting safety standards.

It directed the transport commissioner and the state police chief to "prohibit the use of contract carriages and other transport vehicles in public places, flouting the safety standards."

"Any person who drives, causes or allows to be driven in a public place such a contract carriage or other transport vehicle shall be proceeded against under the Motor Vehicles Act and the driving licence held by the driver of such vehicle shall be forwarded to the licensing authority for disqualification or revocation proceedings.

"The certificate of fitness granted to such a transport vehicle shall be cancelled by the prescribed authority, in accordance with the provisions under the Act," it added.

The transport commissioner was also directed by the bench to initiate proceedings against the contract carriages mentioned in the court order and also obtain the details of the vloggers who posted such promotion videos on YouTube and other online platforms.

Later in the day, a single judge bench of Justice Devan Ramachandran said if the deleterious element of reckless driving on the roads can be addressed, accidents like the one in Palakkad can be averted.

Justice Ramachandran said the implicit requirement of a citizen to feel safe on the roads cannot be lost sight of and for that the drivers of vehicles "require to be told with vehemence how they are expected to conduct themselves and to act."

"This requires the enforcement agencies and officers to be empowered, to be continually scrutinised and made accountable," the court said and on its own impleaded the transport commissioner, also holding charge of road safety commissioner, as party in the matter and asked him to be present in person or appear online on Friday when the issue would be taken up again.

The single judge took up the accident matter based on a message received from a passenger of the Kerala State Road Transport Corporation (KSRTC).

Justice Ramachandran, in his order, said there was a "recklessness" commonly seen on the roads and it was either taken for granted or condoned "under the impression that this is the way of life."

"Drivers use vehicles and occupy road spaces, as if they have the carte blanche to do as they please; and the counsel appearing for the parties to this case, as also others at the bar, agree that this is because there is a complete lack of respect and fear for law," the court noted.

It also noted that there was no deficit in the number of laws nor any shortage of personnel for enforcement of the same.

However, the laws have become unenforceable as people do not fear it since they can escape its consequences by simply paying a fine, the single judge observed during the hearing of the matter.

The judge further said that with the "kind of recklessness which is exhibited continually," there was a potential of several such accidents happening in the future.

"This is not confined to transport vehicles, but to others, including two wheelers; and most of the times none of the applicable laws are complied with, much even less heeded. The roads in Kerala certainly will become killing fields, if this is allowed to go on," Justice Ramachandran said.

The court said despite several of its benches delivering judgments on various facets of road safety, vehicle requirements -- including speed governors, emergency alarms, Vehicle Location Tracking System -- and such other, "it does not appear to have translated into any tangible results on the ground."

That is why "horrific news of an accident awoke us this morning", it said further.

During the hearing, the court asked the state government as to what steps can be taken to ensure safety of citizens on the roads and said, "Issuing circulars is of no use, take action."

The court suggested suspension of licence of drivers after just a couple of violations, issuing orders preventing buses and heavy vehicles from overtaking each other and having seat belts and airbags in buses as well.

In the matter before the division bench, the state government sought time to get details related to the accident, while the Centre asked for time to apprise the high court on the action that can be taken against vloggers and others who are promoting on social media and other online platforms the use of vehicles which flout the safety standards as well as pose a potential threat to the safety of passengers and other road users. 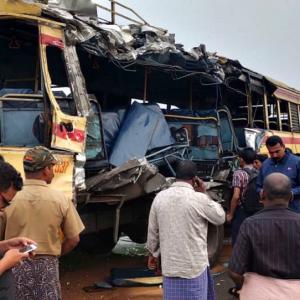 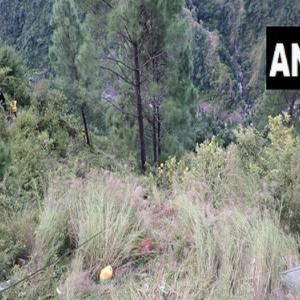