How Chhattisgarh cops were prevented from arresting TV anchor in UP

An 11-member police team from the Congress-ruled Chhattisgarh was on a wild goose chase for an entire day on Tuesday after they landed in Ghaziabad in Bharatiya Janata Party-governed Uttar Pradesh to arrest a TV news anchor over a criminal case lodged against him in Raipur. 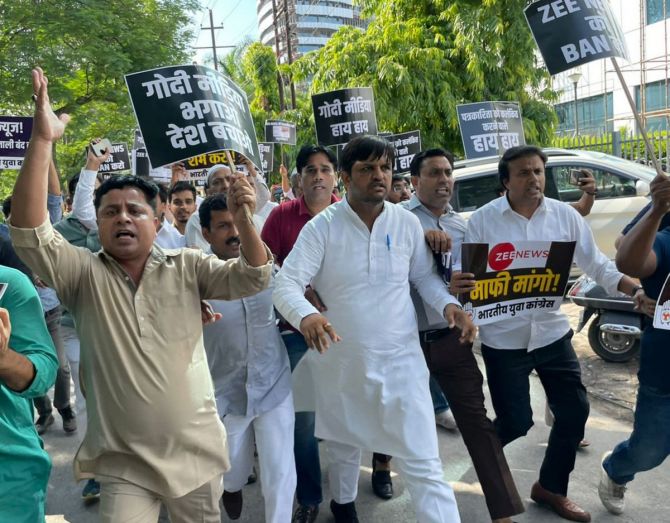 The drama unfolded early in the morning as the Chhattisgarh Police came face to face with their counterparts from Ghaziabad and Noida, who, they claimed, prevented them from arresting Zee News anchor Rohit Ranjan despite an arrest warrant and court order against him.

Deputy Superintendent of Police Udayan Behar led the team that landed at Ranjan's society in Ghaziabad's Indirapuram area around 5.30 am.

However, the TV anchor sought time to go to the bathroom and around 6.15 am shot off a tweet, claiming that the Chhattisgarh Police had landed at his doorstep to arrest him but were not following due legal procedure.

'Soon, around a dozen personnel of the Ghaziabad police reached the spot. They kept dilly-dallying the matter and did not allow us to take Rohit Ranjan away, saying their SHO (station house officer of local Indirapuram police station) was coming,' a Chhattisgarh Police official said.

'Around three hours later, SHO Indirapuram Devraj Singh arrived at the house and said the warrantee (Ranjan) will be taken to the local police station first. They took him in a private Maruti Swift car and did not allow any Chhattisgarh Police official to come in the vehicle,' the official said.

The Chhattisgarh Police team reached the Indirapuram station but were told that a police team from adjoining Noida had taken Ranjan into their custody in connection with an FIR related to the doctored video of Congress leader Rahul Gandhi lodged by them, he said.

The Ghaziabad police and Noida police did not respond to PTI's queries over the allegations.

Later in the day, the Chhattisgarh Police team reached Noida to trace Ranjan, against whom an FIR is lodged at a police station in Raipur under Indian Penal Code sections 153A (promoting enmity between different groups), 295A (deliberate and malicious acts, intended to outrage religious feelings of any class), 467 (forgery), 469 (forgery to harm reputation), 504 (intentional insult), among others.

"We went to the Gautam Buddh Nagar district and sessions court in Greater Noida to see if Ranjan was produced before a local magistrate. We then went to the Sector 20 police station in Noida whose team had picked up Ranjan. There we were denied any information related to the case," the Chhattisgarh official claimed.

"Around 4 pm, we were called for a meeting by the Noida police with senior officers in Greater Noida but no meeting happened till 7 pm," the official added.

When PTI last spoke to the visiting policemen, they were still shuttling between Noida and Greater Noida to trace the TV anchor.

The Chhattisgarh Police are now exploring legal avenues and have given a written complaint both in Ghaziabad and Noida over the non-cooperation they received from their counterparts in connection with the case, the official added.

Kishor Dwivedi
© Copyright 2022 PTI. All rights reserved. Republication or redistribution of PTI content, including by framing or similar means, is expressly prohibited without the prior written consent.