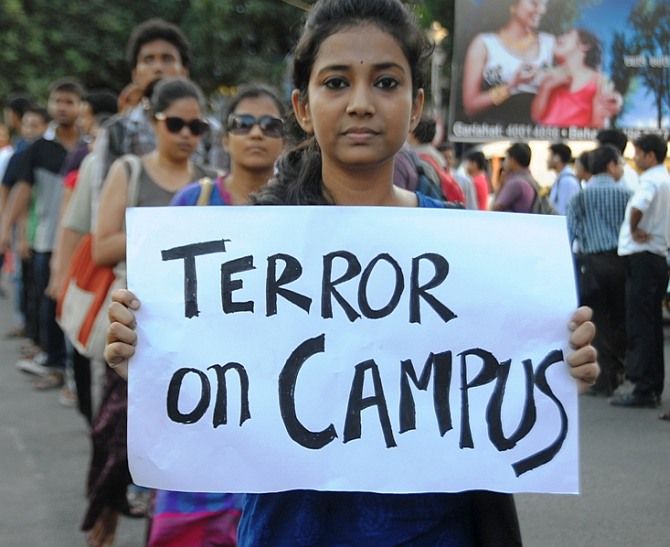 A group of students who were sitting on dharna against university authorities’ ‘apathy’ over the sexual assault on a student on campus on August 28, were beaten up by the police, Rapid Action Force troopers, and ‘plain-clothed goons’ early Wednesday morning.

The protest outside Aurobindo Bhavan, the university vice chancellor’s office, was in its seventh day on Tuesday.

“It was a peaceful assembly. We did not obstruct any official, let alone the vice chancellor," students’ representative Godhuli Biswas, a 3rd year student of English told rediff.com. 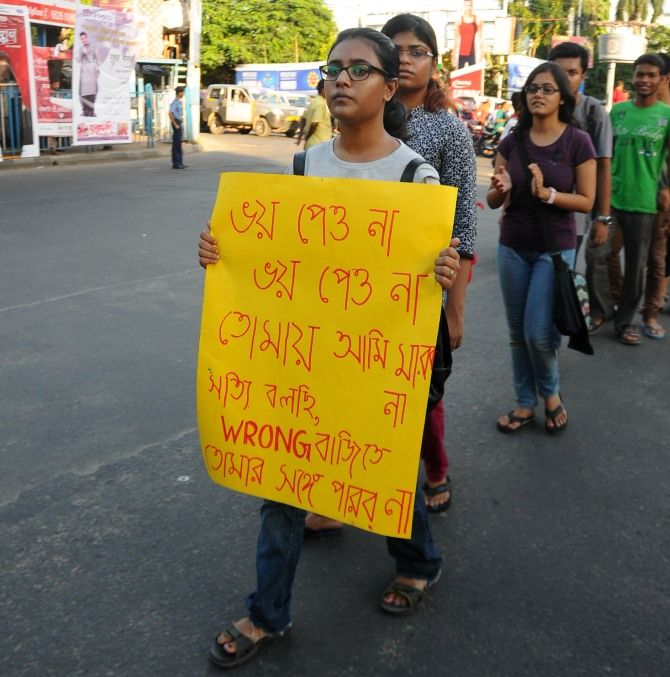 Godhuli said, "We were sitting peacefully, singing songs and strumming guitars. There were some outsiders who, along with policemen, attacked us all of a sudden around 2 am. Then the lights went off and many of our classmates were beaten black and blue. Some of the female students were molested as well.”

"These outsiders, we heard later, were Trinamool Congress cadres. Who let them into the campus so late, we wonder. Is it the administration's effort to gag our attempts to seek justice for one of our classmates who was molested? Is it a jungle raj?”

"The VC, who is holding this post on a temporary basis, belongs to the Trinamool Congress camp. JU is known for its anti-TMC stand. Was it the state administration's way of teaching the JU students a lesson?"

About 35 students were wounded; one of them had to be put on ventilator support.

Though police had initially arrested some of the agitators, they were released on Wednesday afternoon.

They are seeking an unconditional apology from the VC, his immediate resignation or removal. They are also demanding an explanation from state Education Minister Partha Chatterjee. 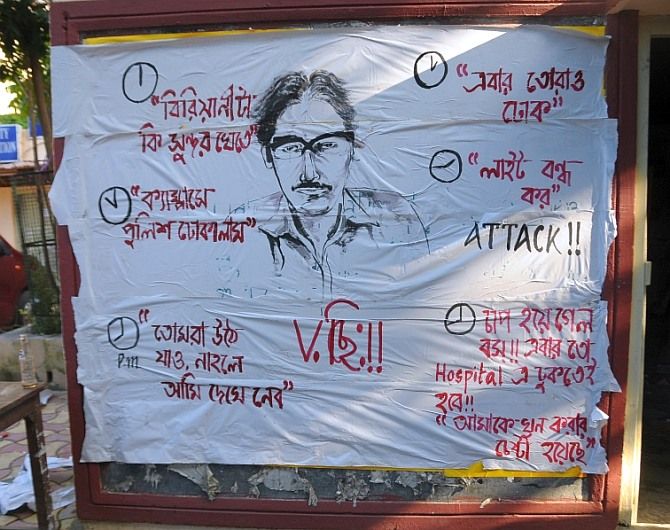 What the Vice Chancellor had to say

Vice Chancellor Abhijit Chakraborty had a different tale to tell.

“The students were holding me hostage and I had to call the police to help me get out. When they arrived, the students attacked them and they had to retaliate,” he told the media earlier on Wednesday.

The VC denied the students’ claim that the lights were switched off from within his office.

“Some wild students broke the lights,” he alleged.

The students, however, say: “He is a liar of the first order. He has no right to be in the VC’s chair. When we approached the authorities for talks, the VC said, ‘I am not paid to talk to the students and it’s below my dignity to hold such discussions’.”

The state education minister though stood by the vice chancellor.

"A gherao is undemocratic; the students should have lifted the protest and talked to the authorities," Chatterjee told media persons. 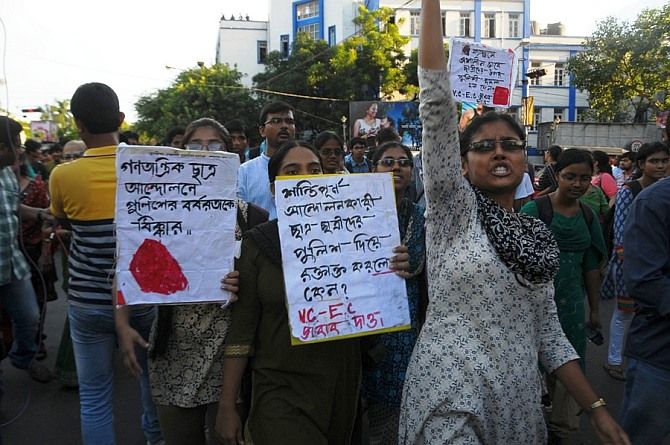 What caused the students’ sit-in?

A student of Jadavpur University was molested on August 28. An internal complaints committee was set up to investigate the incident.

But according to the students, two of the members of the probe team had visited the victim at her home and tried to shift the blame on her.

This shocked the students who decided to organise a sit-in demanding removal of those two members and inclusion of a retired judge in the panel as per the Vishakha guidelines.

But the university authorities refused to relent. This agitated the students further.

According to the students, as the university authorities could not curb the fighting spirit of the students, they set the police and Rapid Action Force troops after them.

Raw video footage shot by students and uploaded on YouTube seemed to validate the students’ complaints. 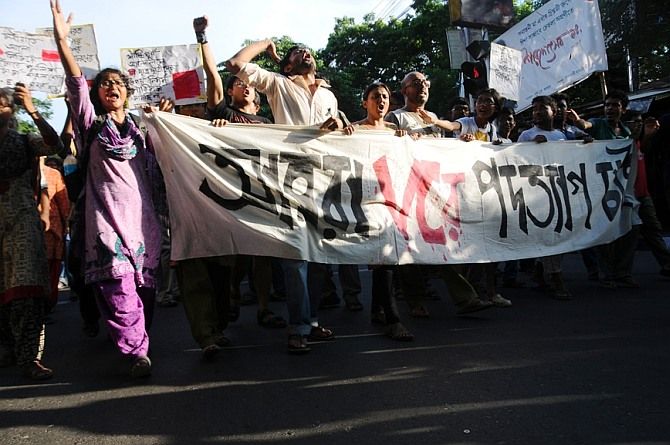 The Jadavpur University incident has drawn widespread protests in every corner of the city. Presidency College Students’ Union has decided to stand by the JU students.

The southern fringe of Kolkata came to a standstill on Wednesday afternoon as the JU students organised rallies and staged dharna in and around Jadavpur, Dhakuria and Golpark.

People from varied walks of life spontaneously joined the rally.

Mainak Biswas, who teaches Film Studies in Jadavpur University, said: "As a professor of the university, I don’t support a sit-in or a dharna. However, I condemn this police action. Why should the police beat up the students? Though I am yet to speak to the JU authorities, whatever happened is really unfortunate.”

Another university professor, who did not want to be named, told rediff.com: “It's a dark day in the university’s history. How can a vice chancellor set the police after the students? Many of us dislike the VC's highhandedness but can't do anything. As a teacher, I condemn this shameful act.”

Madhumita Chatterjee got an electrical engineering degree from Jadavpur University in 1989. Her son Kabir studies here.

Chatterjee said, “It's shocking. Such an incident has never happened before. How can the police and the RAF attack the students who were seeking justice for a victim of molestation? So many students had to be hospitalised. It's a shame for Bengal.”

“Though I was not at the university when the incident took place, as a mother and an ex-student of the university, I had expected a note of apology from the university officials. Who called the Rapid Action Force, I wonder!" 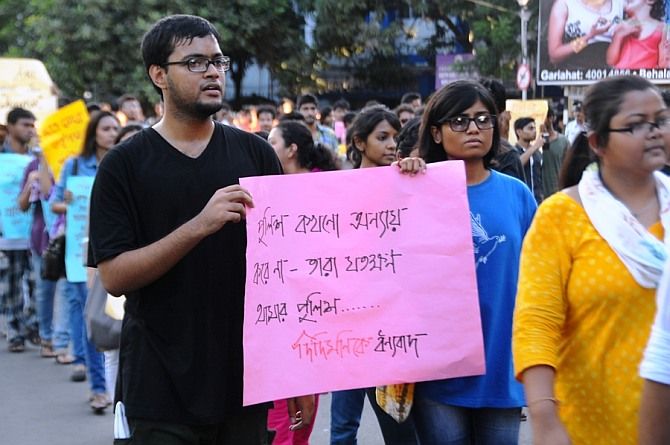 What political leaders have to say

Students Federation of India general secretary and Rajya Sabha Member of Parliament Ritabrata Banerjee is not surprised by the JU incident.

“This is but expected in a state that is ruled by Trinamool Congress – it is a party of the hooligans,” he told media persons who had gathered in the university campus on Wednesday.

“I shudder to think that a VC set the police after his students and to hide evidence, he ordered his men to switch off the lights! Are we living in a democracy,” Banerjee asked.

“This VC is a TMC activist. He is unfit for his post,” Congress leader Arunava Ghosh told rediff.com, adding, “He should resign or be removed immediately. How come all the students are against him?” 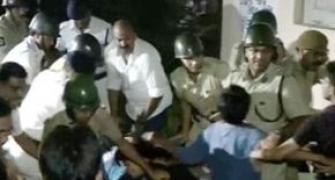 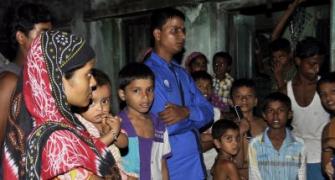 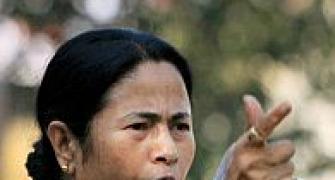 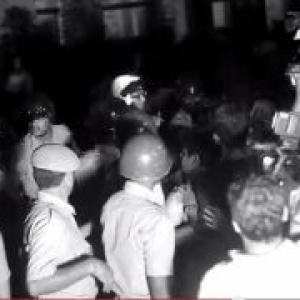 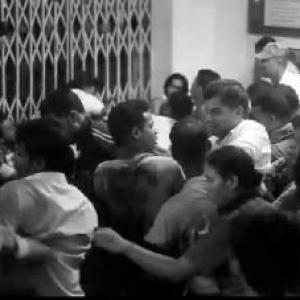 Saw students trying to attack me, feared for my life: JU vice-chancellor