'For the time being, the party to put on hold induction of TMC leaders and focus on strengthening its grassroot level organisation.' 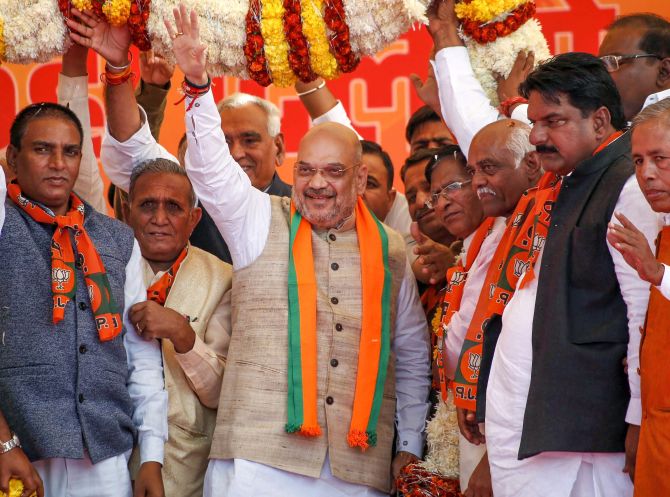 Buoyed by its stupendous victory in West Bengal in the Lok Sabha polls, the Bharatiya Janata Party is preparing a blueprint, which includes putting in place a check and balance mechanism to induct Trinamool Congress leaders and strengthening its grassroot level organisation, to win 'at least 250 seats' in the state assembly elections.

The saffron party won 18 of the 42 Lok Sabha seats in Bengal in the recently-concluded parliamentary polls, only four less than the Mamata Banerjee-led TMC's 22.

Election to the 294-member state assembly is scheduled to be held in 2021.

Emerging as a party fighting for the cause of Bengalis to counter the TMC's issue of Bengali pride, the BJP will give weightage to industrialisation to create jobs and implementation of the Citizenship (Amendment) Bill and the National Register of Citizens (NRC) in the state, if voted to power.

The ruling TMC in West Bengal, however, did not give much importance to the BJP's plans and asserted it will bounce back to power in 2021, saying the saffron party's dream of coming to power in the state will fall flat.

The BJP recorded a staggering 40.5 per cent vote share in the general elections and at present, has six assembly seats of the state in its pocket.

"For the Lok Sabha polls, we had set a target of 23 Lok Sabha seats, and won 18. Now, our new target is 250 seats in the state (assembly). We will prepare our poll strategy and work towards achieving this target," BJP national general secretary and West Bengal in-charge, Kailash Vijayvargiya, told PTI.

The Lok Sabha poll results have indicated a tectonic shift in Bengal politics, with the BJP emerging as a key player and successfully tilting the political equation in its favour by eclipsing the ruling TMC and opposition Congress and Communist Party of India-Marxist.

TMC's seat tally dropped from 34 in 2014 to 22 in this general elections, and the Congress's from four to two. The CPI-M failed to open its account.

BJP sources said in consultation with the central leadership, the party's state unit is drawing up a strategy to ensure its victory in the assembly polls.

"For the time being, induction of TMC leaders into the party, especially MLAs and senior leaders, would be put on hold. We would bring in a crosscheck mechanism into place before inducting TMC leaders in the party.

"Only those who are good leaders with good public image and organisational skills will be inducted into the BJP," a senior central BJP leader privy to the development told PTI on the condition of anonymity.

This decision has been taken in the backdrop of protests over TMC MLA Manirul Islam joining the party.

His induction has sent out a wrong message to the masses and 'we want to emerge as a better alternative and not as a replica of the TMC', the leader said.

The BJP's West Bengal unit has been divided over Islam's induction into the party, as a section feels that people like him will bring bad repute to it in the state, where the party is trying to oust the TMC government.

In the wake of protests in the party, he offered to resign.

The BJP has also decided to revamp the organisation to bring better organisers and political workers into the fold.

"We would revamp the party organisation in districts and areas where we are weak. In districts and local areas where leaders were earlier appointed just for the sake of appointment would be removed with good and efficient persons. But old timers who are good organisers and leaders would be kept in the new committees," Vijayvargiya said.

The party has also decided to categorise assembly segments as 'A, B, C and D' based on the performance in the seats in the Lok Sabha polls.

The party will increase its political activity in the entire state and reach out to the masses. But special focus will be on seats categorised as 'A, B and C', a senior BJP leader said.

"We will work towards ensuring victory in seats in these three categories," the leader said.

The party has also decided to prepare a roadmap based on state and constituency-wise issues.

"For example industry would be a major poll plank in the state especially in areas like Singur, where Tata Motors couldn't complete its factory due to the TMC's negative politics," a BJP leader said.

In border areas and districts, the Citizenship (Amendment) Bill to grant citizenship to refugees and NRC to weed out infiltrators will be major poll planks, the leader said.

"Similarly, in various districts there are some specific issues related to agriculture, industries, so we would identify them and work towards it," a BJP leader said.

The 18 MPs, six MLAs and the municipalities that have been taken over the party should act as model of development and good governance to inspire confidence about BJP among the masses, a BJP source said.

Pradipta Tapadar in Kolkata
© Copyright 2020 PTI. All rights reserved. Republication or redistribution of PTI content, including by framing or similar means, is expressly prohibited without the prior written consent.