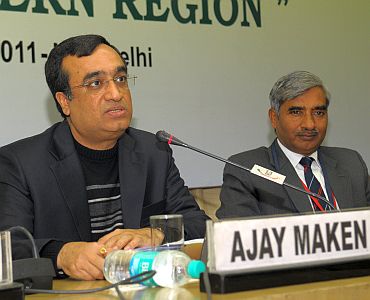 It is the government's way of discouraging young men and women from the troubled states of the northeast region from picking up arms against them. They have finalised a scheme in which skill development will be promoted among the youth and sports will be promoted as means of employment.

In his first conference after assuming the role of Union minister for state for youth affairs and sports, Ajay Maken focused on developing skills among the youth in the northeast region, keeping sports as a focal point.

The workshop, titled 'Youth and sports development in the Northeastern Region' is the first of the several ones Maken's ministry has in store as a part of their special scheme, in which they will engage the youth from troubled areas like the northeast, Jammu and Kashmir and Naxal affected areas.

Maken said that this will help in countering terrorism and insurgency.

"43 per cent of the population in the northeast is between the age group of 14-35. The region has the power of the youth, but somehow, we have not been able to do justice in utilizing this power. We have improved a lot, the number of medals at international events has gone up and we have made a sprout, but there is so much more we can do. We have infrastructure -- both completed and ongoing, which are not being utilised fully. We have schemes for the whole country, but we need schemes for the northeast and Naxal affected tribal areas to bring the youth to the fore," Maken told rediff.com.

The new sports minister said that the scheme will divide the country into four parts -- the northeast, Jammu and Kashmir, Tribal areas and the rest of the country.

Abhijit Rai, the Officer on Special Duty to Maken told rediff.com, "The scheme was announced by the minister about a week ago. This conference is the first in the series of workshops we have planned to address the issue of terrorism and insurgency in troubled areas. We are looking to engage the youth with sports by turning it into an industry."

"We are looking at sports to create jobs. In affected regions, we will also increase quotas for jobs. We can also announce life-long-supporting sports scholarships and facilitate the creation of sports industries in the region. Sports culture is slowly coming to India and in the northeast, certain sports like football is already popular."

Saying that more than 90 per cent of students linked with government youth centers have been placed, Maken said that his ministry has decided to enroll and develop 1.7 lakh National Service Scheme (NSS) volunteers in the region, a lakh more than the previous figure.

Ministers of youth affairs and MPs from all the states of the region interacted with Maken in the daylong conference, outlining the troubles their states faced in promoting sports.

"The central government initiates many schemes. These, however, are not based on the geographical terrain of the state. Like for instance, as per Panchayat Yuva Krida Aur Khel Abhigyan (PYKKA -- a centre-sponsored scheme announced in 2008-2009 for development of basic infrastructure in all village\panchayat block) allocates Rs 1 lakh. Arunachal Pradesh is so hilly that with Rs 1 lakh we can't even make a volley ball court."

Silchar MP Kabindra Purkayastha said, "Sports is a subject that is above all conflicts. When we talk about sports, it engages the whole nation as one. And development of sports in the northeast region is a very good idea. But there is a huge communication gap between the center and the state. Also, existing playfields in the area are being utilized for other purposes. These issues have to be addressed."

In addition to complaints against infrastructure, the MPs and Ministers also told Maken that there was a huge demand of quality coaches.

Jayati Chandra, the secretary for Development of North Eastern Region (DONER) ministry said, "The ministry should work with DONER ministry to come out with a scheme, which can produce high quality coaches. There is a huge need for coaches in the northeast region."

When a minister from Imphal raised the issue of lack of quality coaches in the region, Maken announced a coaching center in Imphal, which would cater to the interests specific to the region. In an interaction with a minister from Nagaland, Maken also announced the sanction of a football academy there.

Riding high on the success story of rehabilitating and training 128 militants hailing from Manipur and placing almost all of them, Delip Chenoy, the CEO of The National Skill Development Corporation (NSDC -- Public Private Partnership mandated to skill 150 million people by 2022), said that the NSDC is planning to initiate more such projects.

"We had selected 143 trainees, identified by the MHA. Before we could take them to Pune to train them, 15 of them ran away from the railway station because they suspected we were taking them elsewhere. We took them to Kohinoor Technical Institute in Pune and gave them training in automobiles, mobile phones and computers. Of the 128 we trained, 84 have already been placed by our partners (Tata group company Syntel, LG vendor Ever Electronics, LG, Hitachi and Kirloskar)."

"On our return, unfortunately, some of them went back to the camps, but the others have vowed never to touch a gun again. We have been monitoring them and also offer them a stipend of Rs 3,100 per month. We will undertake more such projects in the region," Chenoy said.

When asked about future workshops, OSD to Maken, Rai said: "Within a week of its announcement, we organized the northeast conference. The next workshop will be held in March for Tribal areas, most of which are in Naxal affected states. In this workshop as well, we will look to engage the youth through sports."