Activist Medha Patkar on Tuesday suggested that Anna Hazare may have taken the decision to disband his team in view of his "concerns" about getting involved with their proposed political front.

"The only thing that came to my mind whether it was a decision taken by the core team or not. That didn't get reflected by the blog post. But Hazare had already said that he would not be involved with the political front so probably he expressed his concerns and made the decision," she said.

She expressed hope that the movement would not lose steam even though the means have changed. "Everything is a question mark. I hope the movement stands because so many of them came to the Jantar Mantar and supported the cause. So for them, hopefully the movement doesn't lose steam," she said.

"They are changing their course of action and I wish them well but warn them caution as well. There is dilemma in people's minds but you do not know what works.

Patkar who was "always for widening the agenda and to use innovative means to expand the movement", said getting into mainstream politics would probably give Team Anna chance to do just that.

The social activist, however, refrained from commenting whether she will take a "direct or indirect" role in Team Anna's new approach.

"We have not taken any decision and there are no plans. All decisions taken by us are in consensus with National Alliance of People's Movements and Narmada Bachao Andolan. We were not even part of the core team but the core committee and it was a long time since I attended any meeting as well," she said.

Source: PTI© Copyright 2021 PTI. All rights reserved. Republication or redistribution of PTI content, including by framing or similar means, is expressly prohibited without the prior written consent.
Related News: Medha Patkar, Team Anna, Narmada Bachao Andolan, Anna Hazare, National Alliance of People's Movements
SHARE THIS STORY
Print this article
Monsoon session: UPA to face the heat despite triumphs
Team Anna disbandment unfortunate: Hegde
'We have not cheated anyone. Our protest is against graft' 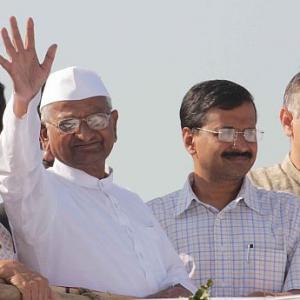 'Hazare's step to disband team is part of growing up'