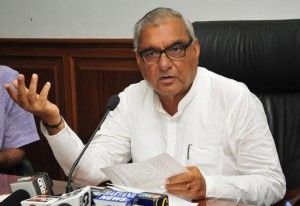 Haryana Chief Minister Bhupinder Singh Hooda was on Tuesday left red faced as a hostile crowd hooted him at a function in Prime Minister Narendra Modi's presence, following which the angry Congress leader said he would boycott such events with PM.

Hooda faced the embarrassment during the foundation stone laying function of a highway project by Modi. As he rose to deliver his speech, the crowd gathered there raised slogans against him and the Congress government.

As Hooda hurriedly continued to read out from his prepared speech, Modi waved to the crowds urging them to remain calm.

However, the people were in no mood to pay heed and continued to interrupt the chief minister's speech, which was lost in the din.

There was continuous hooting against the two-time chief minister of Haryana, which goes to polls in October, and pro-Modi slogans were raised, much to Hooda's discomfort.

Later, a fuming chief minister blamed BJP for the incident.

Speaking to reporters, Hooda said that the BJP "has not done a right thing" with him. "I will not participate in any such function of the prime minister in future," he said.

Hooda said that it was an official function and the BJP has violated the "sanctity" of the occasion and added he will stay away from such events in future.

Amid hot and sultry weather conditions, police and other security personnel faced a tough time controlling the crowds, which barged into the media enclosure as Modi began his speech after laying the foundation stone of the highway project.

Besides Hooda, the other Congress leader present at the function was Haryana PWD (Bridge & Roads) Minister Randeep Singh Surjewala.

Notably, a number of BJP leaders from the state including many party MPs from Haryana, besides Birender Singh, who recently joined the saffron party after deserting Congress, were also present on the occasion.

Hooda spoke at the function after Union Minister of State for Transport Krishan Pal Gurjar and Union Transport Minister Nitin Gadkari had addressed the gathering.

Source: PTI© Copyright 2021 PTI. All rights reserved. Republication or redistribution of PTI content, including by framing or similar means, is expressly prohibited without the prior written consent.
SHARE THIS STORY
Print this article
PIX: Vivek Oberoi, Shilpa Shetty celebrate Janmashtami 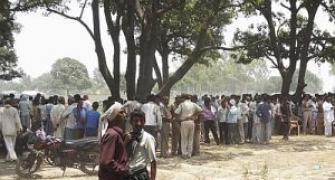 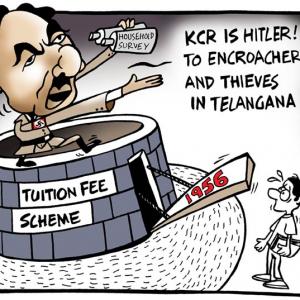