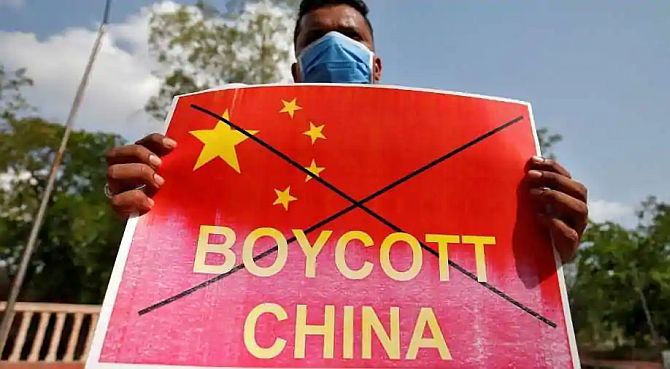 The collected real-time data are being misused and transmitted to servers located in a hostile country, they added.

The banned apps were allegedly engaged in activities prejudicial to the sovereignty and integrity of the country, also posing serious threat to security of the state and defence of India, the sources said.

IT ministry has issued interim directions for the blocking of 54 apps, the sources said.

In a statement, Google said: 'On receipt of the interim order passed under Section 69A of the IT Act, following established process, we have notified the affected developers and have temporarily blocked access to the apps that remained available on the Play Store in India.'

The crackdown marks the first such step taken this year after a massive sweep against the Chinese apps in 2020.

In June 2020, the government had banned 59 apps with Chinese links, including the hugely popular TikTok and UC Browser, saying they were prejudicial to sovereignty, integrity and security of the country.

The 2020 ban -- that had come in the backdrop of stand-off along the Line of Actual Control in Ladakh with Chinese troops -- was also applicable for WeChat and Bigo Live, besides Helo, Likee, CamScanner, Vigo Video, Mi Video Call Xiaomi, Clash of Kings as well as e-commerce platforms Club Factory and Shein.

Thereafter, the government banned 47 more Chinese apps that were clones and variants of the apps blocked earlier.

In September the same year, the government blocked 118 more mobile applications, including the popular gaming app PUBG, terming them prejudicial to the sovereignty, integrity and defence of the nation.

On Monday, the sources said the IT ministry received a request for the blocking of 54 apps from the Ministry of Home Affairs (MHA) under the emergency provision envisaged in Section 69(A) of the Information Technology (IT) Act.

As per the report shared by MHA, these apps are either the cloned version or having similar functionality, privacy issue and security threats as alleged in previously blocked 267 apps by the government in 2020.

The sources said the real-time data collected by these apps are being misused and transmitted to servers located in a hostile country.

This will enable them to compile huge personal data to mine, collate, analyse and profile by the elements who are hostile to the sovereignty and integrity of India and for activities detrimental to national security, they added.

In addition, there are other serious concerns as some of these apps can carry out espionage and surveillance activities via camera/microphone, accessing fine location (GPS) and do malicious network activity similar to previously blocked apps, the sources said.