All major opposition parties criticised Prime Minister Narendra Modi for "failing" to announce any tangible measures to alleviate "pain" of millions of poor in his address to the nation on Tuesday while the Bharatiya Janata Party and other constituents of the ruling coalition welcomed his "hard decision" to extend the current lockdown until May 3 to fight the coronavirus pandemic. 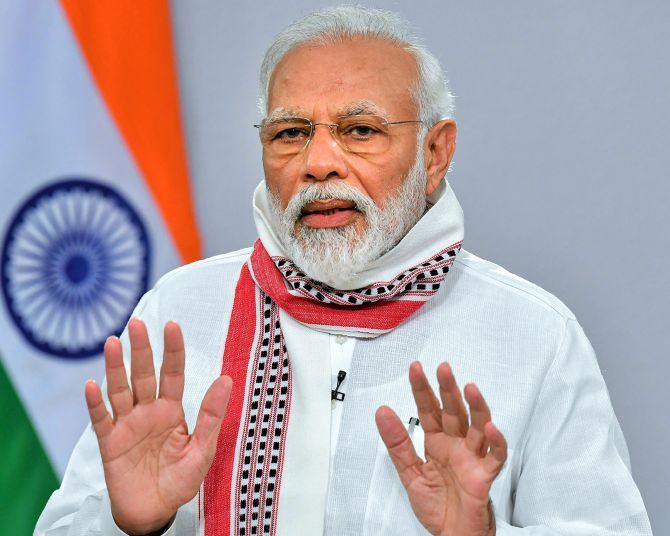 In his televised address, Modi announced extending the nationwide lockdown for another 19 days, adding the restrictions could be reviewed for certain parts of the country on April 20.

The current spell of 21-day lockdown was scheduled to end at midnight Tuesday.

A host of Congress leaders criticised Modi for not coming out with a financial package or concrete steps to revive the economy and asked what he was doing to mitigate the woes of poor, migrant labourers and farmers waiting to harvest crops.

In a Shakespearean reference, Congress leader Abhishek Manu Singhvi described Modi's nearly 25-minute address as "like Hamlet without the Prince of Denmark" , noting that it did not mention any specific problems facing the country like difficulties of the poor.

"Amazing PM address. Exhortation, rhetoric, inspiration... yet hollow on specifics! No financial package, no details, no concrete item. Neither for poor nor middle class nor industry nor businesses. Lockdown is good but cannot be end in itself! Where is single livelihood issue," he asked.

Senior party colleague P Chidambaram said, "The poor have been left to fend for themselves for 21+19 days, including practically soliciting food. There is money, there is food, but the government will not release either money or food. Cry, my beloved country."

Former Congress president Rahul Gandhi said mass coronavirus testing is the key to fight the pandemic but India is currently nowhere in the game.

Pointing to low level of testing for coronavirus in the country, he said India is currently in the company of countries like Laos, Niger and Honduras, with only 149 tests per million population.

"The danger is not over yet. We support the steps announced by the prime minister," Janata Dal-United spokesperson KC Tyagi said while requesting Prime Minister Modi to prioritise the needs of farmers and labourers.

"Whenever the government announces any relief measure, it should prioritise the needs of farmers and labourers so that the poor could return to their occupation and peasants get appropriate price for their crops," Tyagi said.

Union home minister and former party president Amit Shah assured people that there is enough stock of food, medicines and other essential commodities and therefore no one should worry for the extended period of lockdown.

In its reaction, the Communist Party of India-Marxist said the extended lockdown would further increase the sufferings of the poor and marginalised sections.

"The experience of the three-week lockdown has shown the large-scale spread of hunger and inadequate shelter for a significant section of our people. It is imperative that the government must immediately implement a Rs 7500 ex-gratia cash transfer to all non-Income Tax paying families and resort to universal distribution of free foodgrains to all needy people," the party said in a statement.

The lockdown had shone the spotlight on the miseries of lakhs of migrant workers whose journeys on foot from several urban centres to their villages hundreds of kilometres away had grabbed headlines for many days last month.

The catastrophic effect of the lockdown on the overall economy and livelihoods of lakhs of migrant workers triggered severe concerns following which a number of chief ministers in their video conference with Modi on Saturday sought some kind of relaxation for a number of sectors.

In Mumbai, the Shiv Sena and the Nationalist Congress Party said Modi's address lacked substance as he did not suggest ways to strengthen the economy or announced any relief package for the poor and those hit hard by the lockdown.

In its reaction, the Dravida Munnetra Kazhagam criticised Modi for failing to announce any relief measures to address economic disruptions.

"When are you going to make an address which will provide relief to people," asked DMK President MK Stalin in Chennai.

Bahujan Samaj Party leader Mayawati alleged that the poor and downtrodden have not received sufficient quantity of ration during the ongoing lockdown and urged the Centre and state governments to look into the issue.

She said if no immediate relief is provided to the poor, then more people will die of hunger than COVID-19.

Samajwadi Party chief Akhilesh Yadav questioned Modi's assertion that the country had begun screening people coming from abroad long before even a single coronavirus-positive case was found in the country.

In a tweet in Hindi, Yadav said, "It was claimed that the screening started at different airports when there was not even a single coronavirus case in the country."

"But the question then is how serious and meaningful it proved. If it is true, then it should be told how the country got its first coronavirus case," he asked.

Late last month, the government announced a Rs 1.7 lakh crore package aimed at providing relief to those hit hard by the lockdown as well as an insurance cover for healthcare professionals handling virus infected people. 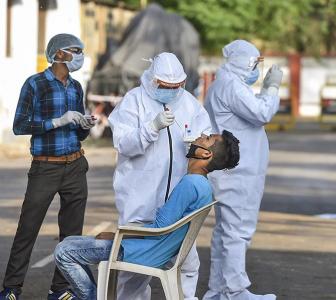 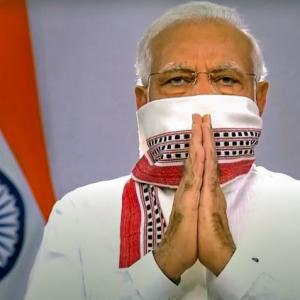 Lockdown now till May 3, few relaxations after Apr 20 Suspension of passenger trains extended till May 3