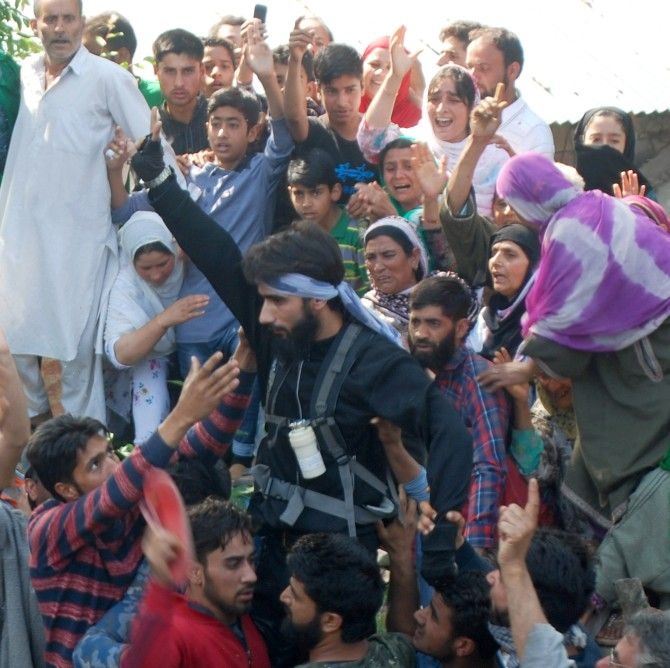 A Hizbul Mujahideen terrorist, who was seen in a video taken during the funeral of outfit commander Sabzar Bhat last week, has surrendered before authorities in Kashmir, the police said on Wednesday.

Investigations revealed that he was Danish Ahmed, a resident of Handwara in north Kashmir studying at the Doon P G College of Agriculture Science and Technology, Dehradun.

"A few days back, video clips of an unidentified terrorist wearing a battle pouch with a grenade were in circulation on social media.

"These video clips were clicked in Tral area by local media-persons during the funeral of self-styled terrorist commander Sabzar Bhat," a police spokesperson said.

Danish was also found to have been involved in stone-pelting incidents in Handwara during the 2016 turmoil. "He was picked up by the police but was let off after counselling in view of his career," the spokesperson said.

After Danish's involvement in terrorism was established, security forces got in touch with his parents and impressed upon them the need to counsel their son to surrender.

"His parents were convinced that if he surrenders, he would be dealt with fairly under law. Efforts made by security forces yielded results and Danish surrendered before police and 21 Rashtriya Rifles of army in Handwara," he said.

During questioning, Danish revealed that he had been in touch with terrorists in south Kashmir on social media and was persuaded to join them.

"He was tasked by Hizbul Mujahideen to activate some local youth in north Kashmir and make the region as terrorism-infested as the southern part of Kashmir.

"However, after spending a few days with the terrorists in south Kashmir, he realised the futility of their militant ranks," the spokesperson said.

A case under relevant sections of law has been registered against Danish, he said. His case is also being considered under the J&K Surrendered Militants Rehabilitation Policy.