Hizbul Mujahideen chief Saifullah Islam Mir was killed in an encounter on the outskirts of the city on Sunday, police said, describing it as a huge success for the security forces. Mir, 31, also known as Dr Saifullah and Gazi Haider, had taken command of the outfit after the killing of his predecessor Riyaz Naikoo in May this year.

He was one of the most wanted terrorists in the Kashmir Valley and involved in several attacks on the security forces, an official said.

Addressing a press conference, Director General of Police Dilbag Singh said Mir, a resident of Malangpora village in Pulwama district, was active since October 2014 and was associated with slain HM commander Burhan Wani for a long time.

His killing is a huge success for the security forces, Singh added.

"We had a successful operation today in which a top commander (Saifullah), you can say he was the number one commander of the HM, was killed. Several families will heave a sigh a relief as he was involved in killing of many people. He was active since October 2014 and was associated with Burhan Wani for a long time," Singh said.

He said Mir was one of the dreaded militants even before taking the command of the outfit.

He had killed many innocent people including three policemen. He was behind the killing of two truck drivers immediately after the abrogation of Article 370. He attacked a Sarpanch in Kulgam recently but he survived the attack.

He also had a hand in the killing of three BJP workers in Kulgam earlier this week. He is involved in over a dozen terror cases and has killed over half-a-dozen people. He was also involved in harming several people and destroying government property, as well as involved in several grenade attacks, the DGP said. 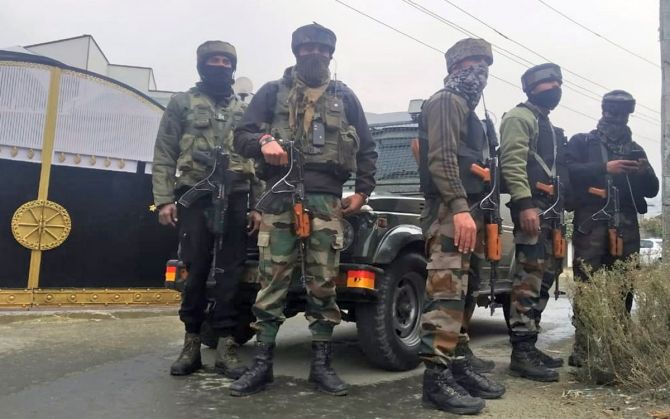 The police chief said the security agencies were tracking the HM commander's movement from south Kashmir towards Srinagar for the last two days.

"I congratulate the Anantnag police for tracking his movement. They then shared the input with the Srinagar police and an operation was launched to neutralise him," Singh said, adding Mir motivated dozens of youths to join the militant ranks.

Singh said the security forces have killed over 200 terrorists this year so far.

"This includes about 190 terrorists in the valley and the rest in the Jammu region," he said.

Earlier, Inspector General of Police (IGP), Kashmir, Vijay Kumar told reporters near the encounter site that Mir's killing was a huge success for the police and security forces.

"This is not a small achievement," he said.

Recounting the events of the morning, an official said security forces launched a cordon and search operation in the Rangreth area near the old airfield following specific information about the presence of militants there. As the forces were conducting searches in the area, the militants fired. The forces retaliated, resulting in the encounter.

A terrorist was killed in the exchange of fire, the official said, identifying him as Saifullah Islam Mir.

Incriminating material, including arms and ammunition, were recovered from the encounter site, he added.

Kumar said the network of J-K Police has become stronger and police get information about any terrorist entering the city.

Asked whether any other militant was apprehended alive from the encounter site, he said a suspect has been taken into custody and is being questioned. 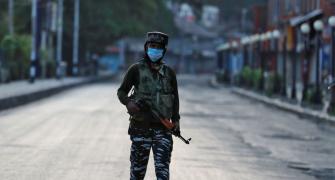 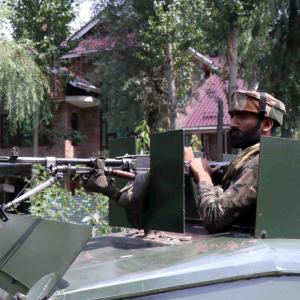