Prime Minister Narendra Modi and US President Donald Trump jointly addressing the "Howdy Modi" event here in the energy capital of the world is "historic" and a direct endorsement of India's Kashmir policy by the United States, Indian Americans said on Saturday. 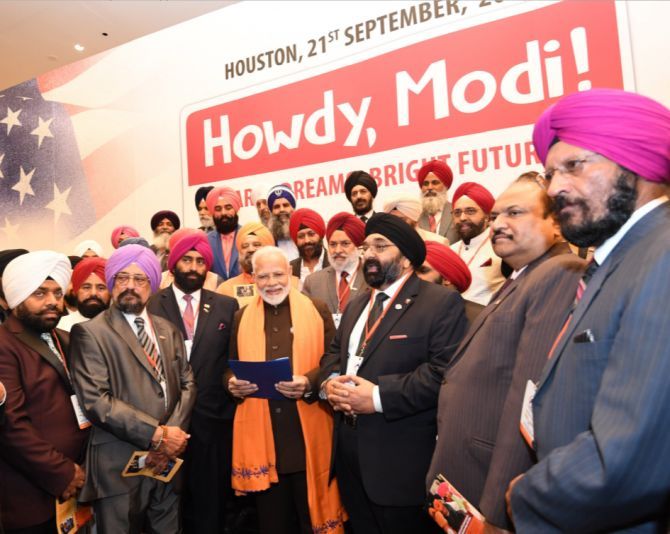 IMAGE: The Sikh community in US were among the delegations that welcomed Prime Minister Narendra Modi to Houston. Photograph: PIB India.

Describing it as a historic moment for the Indian American community, Rakesh Mangal, former president of the Indian American Doctors' Association, Houston, said Trump attending the "Howdy Modi" event says how important India is to the entire world, especially to the US.

The US president joining Modi on stage in Houston "is a very clear indication of where the Trump Administration stands when it comes to Pakistan", Shalabh Kumar from the Republican Hindu Coalition said.

Stating that Pakistan was planning to hold a protest against Modi in front of the NRG stadium on the Kashmir issue, Kumar claimed that it had been quashed to a great extent.

"This is a big slap on Pakistan's Prime Minister Imran Khan," he said, adding that the US is now fully behind India on Kashmir in the aftermath of the abrogation of articles 370 and 35A of the Indian constitution.

Observing that "Howdy Modi" is one of the largest events of Indian Americans that he has seen in his lifetime, Krishna Bansal from Chicago said this is not only "going to be a game-changer" for the community and Indo-US ties, but also for the entire world.

Ritesh Gupta, who flew to Houston from New York, said he had attended the previous two public events of Modi in the US and is excited to be part of the historic "Howdy Modi".

"We are here to welcome Prime Minister Modi for the work he is doing for the Sikh community. He is doing a great job as the prime minister. He has performed far better than any other prime minister of India in the last 70 years," Satpal Singh Khalsa, who has come to Houston from New Mexico, said.

Stating that Modi is taking India on the fast path of development that will make it a superpower, he said, "His reforms are a road to success."

Singh is part of the Sikh delegation that will urge Modi to work with President Trump on mistaken identity.

Responding to a question, he said Sikhs and other religious minorities in India are safe.

"I do not understand why a small minority of Sikhs in the US and Canada is demanding a separate Sikh homeland," Singh said, adding that the global Sikh community wants a strong Punjab.

Meanwhile, a significantly large number of human rights organisations, anti-India and separatist groups have gathered in Houston to hold demonstrations against Modi when he and Trump would address a massive gathering of Indian Americans.

Representatives of the groups holding protest against Modi said Saturday that they are concerned about the human rights conditions in India. Separatist Sikhs and Kashmiri organisations, with known proximity to Pakistani establishments, have also gathered in large numbers in Houston.

The Houston police, in co-ordination with the Secret Service and other security organisations, have tightened the security in and around the NRG stadium and the place where the prime minister and the visiting Indian delegation are staying.

After the White House announced its decision that Trump would join Modi in his address, Houston police has designated a separate protest area near the NRG stadium and protestors would not be allowed to move beyond that.

"We are a bona fide group of Indian Americans with roots in India, and not connected with any other nationality or separatist causes," said Alliance for Justice and Accountability (AJA), a coalition of Indian Americans which has brought together several organisations for the anti-Modi protest.

"We have one and only one agenda: to expose the undemocratic, anti-people and anti-minorities agenda of Mr Modi's government and BJP," it said.

HfHR Co-Founder Sunita Viswanath said her organisation is joining the protest because Hindus cannot accept human rights violations in the name of Hinduism.

"We are especially appalled by the most recent nightmare of the Kashmiri people and the situation of 1.9 million people in India who have been rendered stateless due to the imposition of the travesty called the National Register of Citizens," she said.

In a statement, AJA said its protests will focus on Jammu and Kashmir, where there has been alleged violation of human rights.