Of the 288 assembly seats, the Shiv Sena will contest 124 and the BJP 150. Other seats will go to smaller NDA parties. 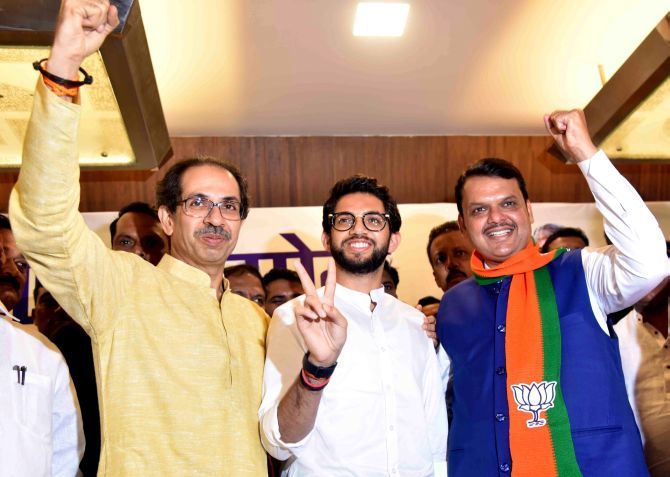 Addressing a joint press conference with Fadnavis on the last day of filing nominations for October 21 polls, Sena chief Uddhav Thackeray said who was the 'elder brother' in the alliance was not an issue.

Of the 288 assembly seats, the Shiv Sena will contest 124, smaller National Democratic Alliance members such as the Republican Party of India-Athawale and Rashtriya Samaj Paksh will contest 14, and remaining seats (150) will be contested by the BJP, Fadnavis said.

The Sena is also expected to get two berths in the Legislative Council from the BJP quota.

"The alliance will post an unprecedented victory," Fadnavis said.

Asked about rebel candidates, Fadnavis said, "They will be asked to withdraw within two days, or else they will be shown their place."

Others doubted whether the two saffron parties would come together for elections this time, 'but there was no doubt in our minds', Fadnavis said.

The Sena and BJP had contested the state polls separately in 2014.

"We had taken the decision early this year that the alliance would be for Lok Sabha as well as assembly. Since we have to be together with our common thread of Hindutva despite having differences over some issues, all of us have made some compromises," he said. 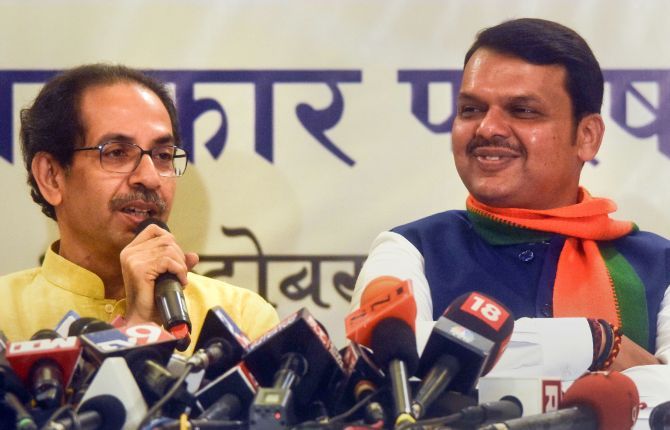 To a question on denial of tickets to senior BJP leader Eknath Khadse and cabinet minister Vinod Tawde among others, Fadnavis said, "In a political party, responsibilities change. Those who were in assembly earlier will now work outside it, and those who were in the organisation will now represent the party in the assembly."

Uddhav Thackeray's son Aaditya, who is making electoral debut from Worli in Mumbai, was also present.

Referring to him, Fadnavis said, "Aaditya will win with a massive margin. He has been touring the state for last few years and now he will join us in the assembly."

Asked about Sena workers's 'dream' of seeing Aaditya on the sixth floor of state secretariat (which houses the offices of chief minister and deputy chief minister), Uddhav Thackeray said, "What's the harm in dreaming?"

"We are in this alliance with our hearts and mind. There is no issue of who is elder brother and who is younger brother here," the Sena chief said.

The Sena had maintained earlier that it was the 'elder brother' (dominant partner) in the saffron combine.

"What is important is the relations between brothers remain strong. Aaditya is in politics to work for the state's welfare, not for self-interest. After results, we will sit together and discuss government formation," Uddhav said.

"The situation prevailing before the Lok Sabha polls has changed," he added.