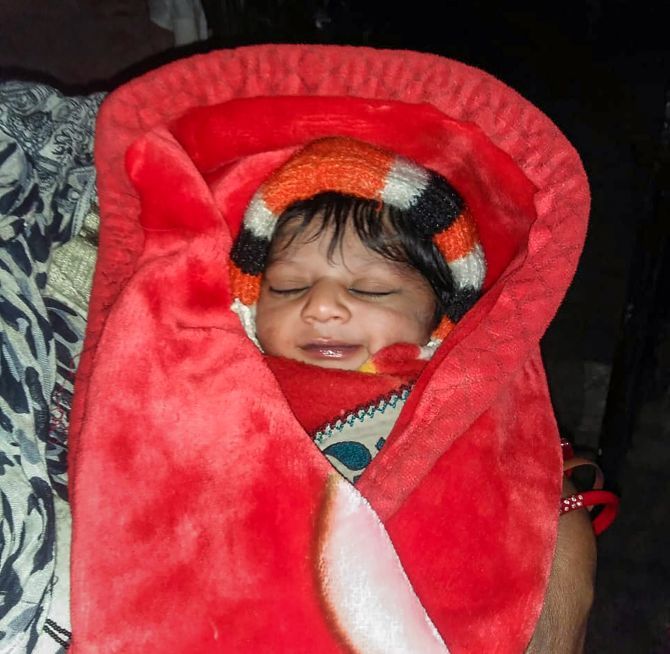 Fireworks, whistles, loud cheers, and claps summed up the festive mood among Pakistani Hindus in the Majnu Ka Tila area in New Delhi as Rajya Sabha passed the Citizenship (Amendment) Bill, stamping the seal of home for them in India.

A family residing in the resettlement colony named their newborn daughter 'Nagrikta' (citizenship) as Parliament passed the bill.

Her grandmother Meera Das, 40, told PTI that the baby was born on Monday and the family decided to name her 'Nagrikta' anticipating the bill would clear the Rajya Sabha hurdle.

Das herself observed a fast praying for the passage of the bill in the Lower House.

"We came to India eight years ago in the search for safe haven. It is the only home for us. But the lack of citizenship would hurt. Now, we are proud Indians, we can fly like a bird," she said.

During the day, people huddled around a radio while some scoured their phones for news on the passage of the legislation.

The makeshift tents and unplastered walls with metal roofs in north Delhi's Majnu ka Tila area are home to about 750 Pakistani Hindus who fled the neighbouring country to seek refuge here. Many others live in resettlement colonies in Rohini Sector 9 and 11, Adarsh Nagar and near the Signature Bridge.

Among them is 42-year-old Sona Das, who left his home in Hyderabad, Pakistan, and came to Delhi on a cold winter night in 2011, not knowing what would become of him and his family.

All they had was a 15-day pilgrimage visa and a few bags of clothes.

After multiple protests, court cases and eight years, Das, his wife and nine children, the youngest just eight, are looking to the bill to give them stability.

"We cook on earthen stoves and use solar batteries to light up our homes. Only two or three houses have got television sets. Municipal bodies have made arrangement for water. But there is no sewer network.

"The city government doesn't listen to us because we do not have voting rights," Das, who manages to eke a living doing odd jobs, said.

The bill seeks to give Indian nationality to non-Muslim refugees from Pakistan, Bangladesh and Afghanistan who came to India before December 31.

With the passage of the bill, those who have stayed in India for five years will be eligible for Indian citizenship.

Earlier, 11 years of residence was the standard eligibility requirement for naturalisation.

Protests broke out against the bill in several parts of the country and opposition leaders and others have described it as antithetical to the idea of India, but the mood is quite different in Majnu Ka Tila.

Women peeked out through the windows and children ran through the serpentine, uneven dirt pathways with mediapersons thronging the area. Slogans of 'Jai Hind' and 'Jai Shri Ram' were heard and flowers offered in the community temple.

Gathered in small groups, people in the locality, most of them daily wage labourers, discussed what would change for them if the bill is passed in the Rajya Sabha on Wednesday.

Dahramveer Bagri, 43, who led a group of 484 Pakistani Hindus to Delhi in 2013, said, "The days of hardships are finally over."

"NGOs have been kind enough to provide us basic healthcare. There are a few good people who have been raising our issues."

A couple, Bhupindra Sareen, 45, and Reema Sareen, 43, came with a bag full of winter clothes and sweets.

Bhupindra remembered how he met Das and the other Pakistani Hindus one night in December eight years ago.

"It was raining on that December night and these people had no escape. They were shivering, sitting under the trees. My eyes fell on them when I was passing through the area."

"I called up my friend who arranged for firewood and food. A lovely relationship, which started that night, grew stronger by the day," he said.

Over the years, Bhupindra wrote to several ministers, politicians, social workers and NGOs about the needs and issues of Pakistani Hindus living on the banks of the Yamuna in New Delhi.

"The passage of the Bill means those who came before December 31, 2014 need not wait too long for the citizenship and the respect that comes with it," he said.

"These people live under constant fear of being uprooted from the area. Recently, after a petition alleged that the refugees were polluting the Yamuna, the National Green Tribunal ordered the Delhi Development Authority to evacuate the residents from the floodplains on account of encroachment.

"Secondly, they do not have regular work. Citizenship will change things for better," he added.

Rajini Bagari, 26, said things would be a lot better with a voter ID card that declared her an Indian citizen.

"Our demand is that the government grant us citizenship and rehabilitate us properly," Bagari said.

"There are many government schemes which are out of our reach now. If we get citizenship, political parties and governments will care for us," she said.