With a rise in the clout of Muslims in western Uttar Pradesh, fearful Hindus are being radicalised, reports Mayank Mishra. 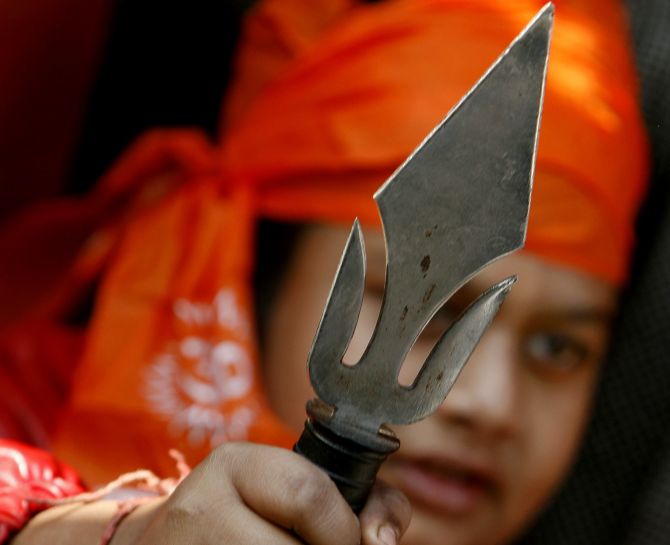 IMAGE: Hindu children are taught the use of weapons as part of training against a perceived 'love jihad'. Photograph: Adnan Abidi/Reuters

Chahat, 6, has very little idea about what she is doing. But she does not hesitate for a second when asked to show her skills with a sword.

She is one of the 50 boys and girls who are regulars at an akhara-cum-training-camp in Rori village, located on the outskirts of Ghaziabad district.

Her explanation, "Desh ka naam badhana hai (Have to contribute to the country's glory)" on why she is part of this group does not quite match with the statements of the organisers, though.

"We are imparting mental and physical training to our children so that they are ready to take on the mentality of Islamic jihad," observes Chetna Sharma, a Meerut-based lawyer and president of Hindu Swabhiman. She has instrumental in setting up such camps in western Uttar Pradesh.

She recounts a number of stories of what she calls 'love jihad' in and around Meerut.

"The strategy keeps changing, but the motive of trapping innocent Hindu girls remains the same. Whether by organising pool parties or by enticing young minds through other means, there is definitely a conspiracy," says Sharma, sitting in her house while showing pictures of some recent incidents on her laptop.

Sharma is not alone in believing that something like this is going on. There are many others who see a "wider design" whenever any incident of Hindu girl falling in love with a Muslim boy comes to light.

One such incident was reported in Shamli district last month. In the last week of December, a mahapanchayat was called in Shamli to protest against the perceived failure of the police to trace a 23-year-old Hindu woman who had gone missing with a Muslim man in his early 40s.

The mahapanchayat brought the latent communal tension to the fore yet again.

"A perception is gaining ground among Hindus in the region is that it is increasingly becoming very difficult to have daughters in the family. Family members worry about their safety whenever they venture out," says Vikash Baliyan, an aspiring politician who runs a weekly, Krishi Nazar, in Muzaffarnagar.

However, the Jamiat Ulama-I-Hind's Moosa Kazmi says it is unfortunate that incidents of a Hindu woman falling in love with a Muslim are given communal colour.

But the perception persists, and has reached even villages in the region.

A number of people in Jadauga village -- on the outskirts of Muzaffarnagar -- kept referring to such incidents, giving the impression that all is not well between the two communities.

It is due to the perception that some Hindu groups like the one headed by Sharma have decided to impart physical and mental training to young boys and girls. One such training camp is being held in the premises of a retired army official Parvinder Arya in Rori village.

"I have served in Kashmir and have seen the plight of Hindus there. I do not want the same thing to happen in western Uttar Pradesh," says Arya.

Sharma claims that 20 such training camps are operational in the region and within a year, her organisation plans to cover most of the villages in the region.

At each training camp, boys and girls are getting trained with lathis, swords, bow and arrow, among others, with occasional shouts of "Jai Shri Ram" and "Jai Maha Kali."

"I want them to be physically fit and mentally strong to take on enemies once the situation arises," says Arya, as the trainees alternate between doing push-ups and sit-ups.

The training camp currently has around 60 boys and girls. The one in Rori village has been running for the last two years. Arya claims that the trained boys have started camps in other villages as well.

What explains the radicalisation of Hindus in the region?

Recent economic and political changes in the state and the region offer some answers. The number of Muslim MLAs in Uttar Pradesh went up from 56 in 2007 to 69 in 2009. What is more, the members of the community did even better in urban local body elections.

An analysis of urban local body elections of 2012 by A K Verma of the Kanpur-based Christ Church College shows that, 'In the 12 nagar nigams, though no Muslim was elected as mayor, 21.4 per cent Muslims were elected as members.'

His research shows that in two western Uttar Pradesh districts of Saharanpur and Bijnor, Muslims swept the polls.

"In a multi-cornered contest like in Uttar Pradesh, the votes of Muslims have become very significant for parties. Since the proportion of Muslims in the western part of the state is even more, they are sought after by political parties. Their growing representation in elected positions is a result of that," argues Sudhir Panwar, a Lucknow-based political scientist.

Political empowerment of the community is perhaps a result of their growing clout economically.

Buffalo meat exports, which was less than $3 billion in 2011-2012, is now in excess of $4 billion. Most of the slaughter houses in the state are located in the western region, and the majority of them are owned by Muslims, according to reports.

Recently released Census data also give some hints of how Muslims are recovering lost ground vis-a-vis other communities.

The National Sample Survey Organisation's data shows that from 2004-2005 to 2011-2012 the decline in the incidence of poverty among Muslims was at 2.51 per cent in rural areas and 2.8 per cent in urban areas as against the overall average of 2.06 per cent and 1.81 per cent, respectively.

The decline was much sharper in urban areas thanks to the growing demand of artisans (carpenters, masons, electricians, et cetera) in recent times.

Last year's Teamlease report had revealed that salary growth of skilled workers has been at par with young engineers. What perhaps also helps skilled workers in western Uttar Pradesh is the region's proximity to the New Delhi region.

What is more, the decline in poverty among self-employed Muslims in the non-agriculture category has been even sharper in Uttar Pradesh, according to the NSSO data.

The growing radicalisation of Hindus is perhaps a reaction to the rise in clout of Muslims.