A Durga idol in Kolkata in which the 'Mahishasur' was replaced by a crudely-crafted Mahatma Gandhi lookalike created a controversy on the birth anniversary of the father of the nation. Akhil Bharatiya Hindu Mahasabha, organisers of the puja near Ruby Crossing in southwest Kolkata, changed the appearance of the idol that looked like Gandhi following instructions from the police after a complaint was lodged.

The organisers said the similarities were "just a coincidence".

According to mythology, Goddess Durga slew Mahishasur in an epic battle to end his evil reign.

"The Durga idol that was worshipped here initially had a Mahishasur whose face looked similar to that of Mahatma Gandhi. The similarities are just a coincidence. After photos of it went viral, a police team visited the pandal and asked us to change the face," Akhil Bharatiya Hindu Mahasabha state working president Chandrachur Goswami told PTI on Sunday.

A journalist had earlier in the day tweeted a photograph of the Durga idol, tagging the Kolkata police. He deleted the post later, claiming that the police asked him to do so as it might create tension during the festival.

"I have been requested by @KolkataPolice cyber cell @DCCyberKP to delete my tweet on a particular puja in Kolkata as they think it might create tension amid the festivities. As a responsible citizen I abide by their request," Alt News senior editor Indradeep Bhattacharyya said in a fresh post.

"The police asked us to change it, and we obliged. We put a moustache and hair on Mahishasur's idol," he said.

"We don't support what the Akhil Bharatiya Hindu Mahasabha did. We condemn it. We too had differences with Gandhiji's views, but this is not a way to protest against it," said Sandip Mukherjee, president, Bangiya Parishad Hindu Mahasabha.

Political parties such as the Trinamool Congress and the BJP also slammed the alleged depiction of Gandhi as Mahishasur.

The ruling Trinamool Congress state spokesperson Kunal Ghosh said if this was really done, it was nothing but sacrilege.

"It is an insult to the father of the nation. It is an insult to every citizen of the country. What would the BJP say about such an insult? We know the assassin of Gandhiji belonged to which ideological camp," Ghosh added.

The state BJP too criticised such a representation.

"If such a move had been made, it is unfortunate. We condemn it. This is in poor taste," BJP state president Sukanta Majumdar told reporters.

Every year, puja organisers choose a theme, mainly social issues, and use their pandals, idols and lighting arrangements to depict it. Many a time, the traditional Mahishasur was replaced by something that represents social evil. 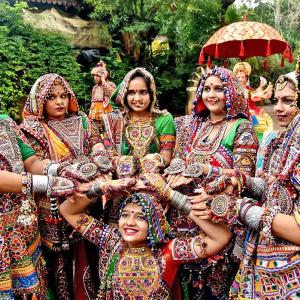 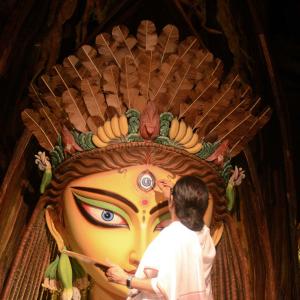