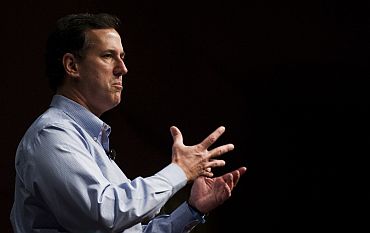 Hindu Americans have said they are appalled by the recent comments made by Republican presidential candidate Rick Santorum -- the darling of the conservative evangelicals -- on the eve of last month's South Carolina primary that the concept of equality did not come from Islam or "Eastern religions" but rather from the "God of Abraham, Isaac and Jacob."

Leaders of the Hindu American Foundation that had previously worked with Santorum when he served as a US Senator from Pennsylvania and even commended his past work on human rights, were outraged by Santorum's remarks.

Dr Aseem Shukla, Minneapolis-based physician, who is a co-founder and board member of HAF, said, "Senator Santorum's presidential campaign is now playing to the lowest common denominator of religious bigotry and prejudice by attacking Eastern religions and Islam."

"His comments not only demonstrate a disregard for America's great history of pluralism and religious diversity, but also show a profound ignorance of the teachings of dharma spiritual traditions, such as Hinduism, Buddhism, Jainism, and Sikhism," Shukla, who blogs regularly in the Washington Post's Inter-faith Forum, said.

Santorum, who addressed a crowd of over 200 people at the Clock Restaurant in the small town of Boiling Springs, further declared that Americans should live "responsibly in conforming with God's laws," since their rights and equality come from God.

Shukla said, "For Mr Santorum to present himself as a 'true conservative' is to defame the conservative movement that should never allow itself to be conflated with his intolerant message."

Despite his last-minute appeals to South Carolina voters, the former Pennsylvania Senator finished in third place with 17 percent of the vote, behind both Mitt Romney and Newt Gingrich, who received 27.8 percent and 40.4 percent respectively.

Former House Speaker Gingrich who was more than 10 points behind Romney a week before the primary, galloped to victory with strong debate performances and with the support of the Tea Party conservatives who ditched Santorum for Gingrich.

Jay Kansara, HAF's DC-based associate director, said, "Hinduism, the world's oldest spiritual tradition, has long advanced the concept of equality that transcends humanity and is inclusive of the entire creation that is a manifestation of an immanent and omnipotent God."

Thus, he said, "Mr Santorum would do well in joining the millions of Americans who have actually read and drawn inspiration from the Bhagavad Gita and other dharmic, or Eastern, scripture before making such divisive and ill-informed statements."

Kansara's sentiments were echoed by other members of the HAF executive committee, with Sheetal Shah, senior director complaining that Santorum's "remarks were ill-conceived and reek of disrespect to all Americans."

"Regardless of his personal beliefs, he is running for an office that pledges to serve all Americans equally, regardless of their faith. His comments raise serious concern about his ability to fulfill such a role," she added.

Another director, attorney Samir Kalra also slammed Santorum, saying that his "comments cross all boundaries of acceptable political discourse. It's unfortunate that political candidates believe they can garner votes by making intolerant and bigoted statements. They should instead focus on the critical issues facing the American people."

Suhag Shukla, legal counsel and managing director of HAF told rediff.com that she had written to the Santorum campaign "and I am awaiting a response."

In her missive to the campaign, Shukla said, in making to Santorum's remarks at the town hall meeting, making reference to Santorum's bigoted and offensive remarks, noted that "having previously worked with Mr Santorum when he served as Senator and even recognized his past work on human rights, HAF is deeply disappointed with his divisive, religiously-bigoted, and misinformed remarks."

"On behalf of not only Hindu Americans, but all Americans who value equality and the religious diversity that makes America great, we seek clarification on candidate Santorum's stance on religious liberty, both in relation to the separation of church and state and free exercise of religion, as well as his commitment to serving and respecting all Americans regardless of faith or no faith," she wrote.

Shukla said they would continue to write and keep reaching out to the campaign until a response was received, and in her missive she also encouraged Santorum and his campaign staff to go to the HAF website "for basic information about Hinduism and its teachings."

Another Hindu American activist Rajan Zed, also pilloried Santorum pointing out that "Hinduism is the world's oldest religion and in Hinduism, equality is a fundamental truth."

Zed, who is the president of Universal Society of Hinduism, stressed that ancient Hindu scripture Shvetashvatara Upanishad "told us that God dwelled in the hearts of all creatures: 'He is this boy, he is that girl, he is this man, he is that woman, and he is this old man, too, tottering on his staff.'"

Zed suggested that Santorum study Hinduism and other Eastern religions as the United States of America being a diverse society, someone aspiring to be President should know at least the basics of the religions of all Americans.

He said, if asked, he or other Hindu scholars stood ready to "enlighten Santorum about Hinduism."

Click here for more Realtime News on US presidential election! 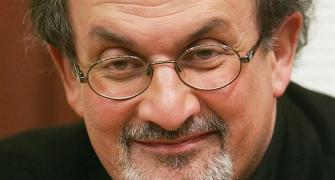 US prez polls: Romney surges ahead of Gingrich