Bharatiya Janata Party leader Himanta Biswa Sarma, was on Monday sworn-in as the 15th Chief Minister of Assam by Governor Jagadish Mukhi at the Srimanta Sankardeva Kalakshetra, a major cultural institution, in Guwahati.

He also vowed to take the state to greater heights of prosperity. Along with Sarma who is the convenor of the North East Democratic Alliance (NEDA), the National Democratic Alliance's version in the region, 13 other newly-elected legislators of the saffron party and alliance partners were sworn-in as ministers amid strict COVID-19 protocols.

Clad in traditional 'pat silk' dhoti and kurta with a muga 'gamosa' (traditional towel) draped around his neck, Sarma took the oath of office and secrecy in Assamese.

After taking the oath, he tweeted, 'With blessings and grace of the people of Assam, I take over as chief minister of the state today. Taking Assam to greater heights of prosperity and making it a leading state, pursuing the ideals of the prime minister.'

'Humbled and truly grateful to Prime Minister for believing in us.........We shall leave no stone unturned to carry forward your vision of taking Assam, and North East to greater heights. Forever in gratitude,' Sarma said in reply to Modi's message.

Replying to Shah's congratulatory post, he said, 'Deepest gratitude for giving us this wonderful opportunity to serve the people of Assam. Your valuable insights empower and encourage us to do our best. Thank you for being an amazing leader.' 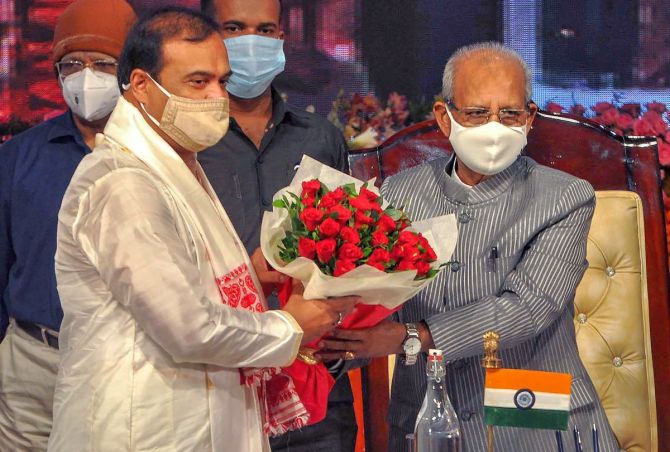 The new BJP ministers are Ranoj Pegu, Bimal Borah, Ashok Singhal and the only woman in the cabinet, Ajanta Neog.

She joined the saffron party from the Congress before the assembly elections.

Four BJP ministers of the previous government led by Sonowal did not find a place in Sarma's ministry.

The Asom Gana Parishad's Atul Bora and Keshab Mahanta, both ministers in the previous government also took the oath.

Another AGP minister in the previous government, Phanibhushan Choudhury, who was elected to the assembly for a record eighth time, did not find a place in the new ministry.

The only United People's Party Liberal (UPPL) MLA to take the oath was former Rajya Sabha MP U G Brahma.

The previous NDA government had the Bodoland People's Front (BPF) as a constituent of the coalition but this time the BJP severed ties with it and stitched an alliance with the UPPL.

10 new ministers took the oath in Assamese while Suklabaidya did it in Bengali, Singhal in English and Brahma in Bodo language. Sarma's ministry has representation from all the major areas and communities.

Mohan, Borah and Kishan represent the tea tribe community. Neog and both the AGP ministers are from Upper Assam, while Dass and Patowary are from Lower Assam.

Suklabaidya hailed from Barak Valley, Hazarika from Central Assam along with Singhal while Pegu is from the Northern bank.

The maximum strength of the ministry in Assam is 18, including the chief minister.

Sarma's mother Mrinalini Devi, who is also the vice-president of prestigious literary body Assam Sahitya Sabha, told reporters that her son has 'given her the best gift on the occasion of Mother's day yesterday. I bless him to serve the people of the state with dedication and devotion'.

Before taking oath as the chief minister, Sarma went to seek blessings at the Kamakhya Temple in Guwahati besides Doul Gobindo temple in North Guwahati and Sri Sri Hatti Sattra in Sualkuchi, both falling under his Jalukbari constituency from where he has won for the fifth consecutive term.

The swearing-in ceremony was held amidst strict Covid protocols with the chief minister and the ministers removing the mask only while taking their oath.

Of the 126 assembly seats in Assam, the ruling alliance has secured 75 seats with BJP winning 60 while the AGP got nine seats and the UPPL six.