Hillary 'fears jihadists may get hold of Pak nukes' 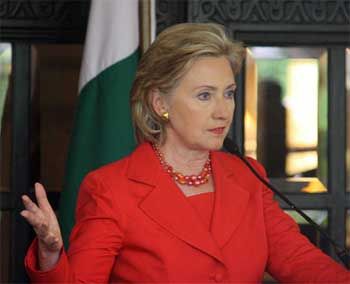 She asserted that people live in fear that Islamabad is going to have a coup.

Expressing her concern about the emerging nuclear arms race across the world, Hillary Clinton, the Democratic presidential nominee, said that Pakistan is running at full speed to develop tactical nukes in their continuing hostility with India.

Clinton made the statement in an audio recording of the fund-raiser that appeared on the website of The Washington Free Beacon, a conservative publication, which was obtained from the hack of a campaign staff member, reports the New York Times.

Going beyond the question to warn of an emerging nuclear arms race, she named Russia, China as well as Pakistan and India saying, “This is one of the most dangerous developments imaginable.”

She asserted that people live in fear that Islamabad is going to have a coup.

“Pakistan is running full speed to develop tactical nukes in their continuing hostility with India. But we live in fear that they’re going to have a coup; that jihadists are going to take over the government, they’re going to get access to nuclear weapons, and you’ll have suicide nuclear bombers. So, this could not be a more threatening scenario,” she said.

However, it should be noted that the 50-minute recording was made in February when Clinton was the secretary of State.

Clinton said the United States needs to ‘do everything we can’ to restrain the competitions, including exploring new treaties with Moscow that would go beyond the New Start treaty of 2010, which she helped negotiate.

The former secretary of state has expressed doubts about whether Washington should go forward with a trillion-dollar modernisation of its nuclear forces, which questions President Barack Obama’s administration plan.

She suggested that she would be far tougher against foreign nations that hack into American computer networks and would kill one of the Pentagon’s pet projects, a nuclear-tipped cruise missile.

A former Defence Department official present at the fund-raiser, Andrew C Weber, asked Clinton about the modernisation push and whether she, as president, would cancel the cruise missile, which he called a ‘particularly destabilising, dangerous type of nuclear weapon’.

She answered, “I certainly would be inclined to do that. The last thing we need are sophisticated cruise missiles that are nuclear-armed.”