All 23 Indian sailors aboard an oil tanker were safe on Wednesday after the Nigerian navy rescued their vessel that was hijacked briefly by pirates off the coast of southern Nigeria.

In the third such attack in over two weeks in the Gulf of Guinea, the Singapore-owned vessel, MT Abu Dhabi Star, was taken over by pirates on Tuesday night when it was sailing towards the open sea.

A Nigerian Navy vessel, that had rushed towards the ship soon after receiving distress signals, pulled along the MT Abu Dhabi Star on Wednesday afternoon and took control of the vessel, Pioneer Ship Management Services LLC spokesman Pat Adamson said.

Navy spokesman Kabir Aliyu told PTI that the ship and its crew were taken hostage off Lagos coast as they made frantic efforts to escape the attack by the criminals. They sent several distressed calls from the vessel, which anchored 80 nautical miles off the coast.

He said the ship was being escorted into the country's biggest port of Lagos.

Meanwhile, Naval sources said the attackers normally siphon oil from the ships and release them after a few days.

The sailors had locked themselves up in a safe room in the ship to avoid harm by the attackers who were suspected to be oil thieves from Nigeria's Niger Delta region.

Last month, pirates had hijacked and looted two oil tankers off nearby Togo. The ships and all crew members were later freed.

Also, an oil vessel was seized last week by pirates, off the Coast of Togolese capital of Lome and released few days later near Nigeria with its 23 Russian crew members. About 3,000 tonnes of fuel was stolen from the ship.

The Gulf of Guinea has witnessed 37 attacks on ships this year alone. 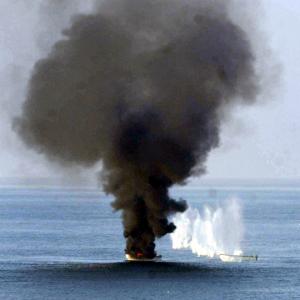 In 2012, pirates find themselves in troubled waters