A breathtaking display of manoeuvres by military aircraft besides aerobatic teams cast a spell at the 12th edition of Aero India.

The Bengaluru skies dazzled with somersaults and stunts by metal birds.

Venkata Satish Guttula managed to click some of the beauties as they flew overhead. The advanced Light Helicpoter Dhruv is a multi-role, new-generation helicopter in the 5.5-ton weight class, indigenously designed and developed by HAL.

Powered by two Shakti engines, it provides superlative performance throughout its flight envelop.

It is suited for a high-speed cruise for rapid deployment and to maximise the area of operations.

The basic helicopter is produced in skid version and wheeled version. In the wheeled version, options for fixed and retractable undercarriages are available.

The Dhruv is built for military as well as civil applications for which the helicopter is certified by the Centre for Military Airworthiness and Certification, India, and the Directorate General of Civil Aviation respectively.

The utility version of the Dhruv helicopter can be used for VIP travel, commute, search and rescue, emergency medical service, under sling load, disaster relief, and offshore operations.

HAL is also building a civil version for DGCA approval.

The Dhruv helicopter is suitable for increased payload at higher altitudes and has been developed for the Indian Air Force, Navy, and the Army. This version is the ALH Mk-III version that is equipped with MICU (Medical Intensive Care Unit) 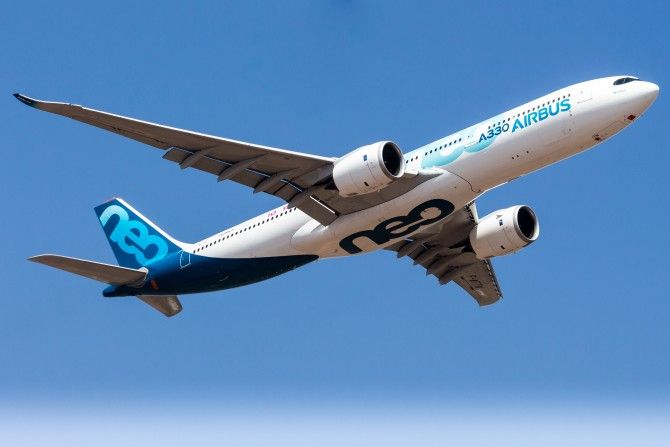 A new version with modern engines comparable to those developed for the Boeing 787 was called for by owners of the current A330. It was launched on July 14, 2014, at the Farnborough airshow, promising 14% better fuel economy per seat.

The Avro and Kirans 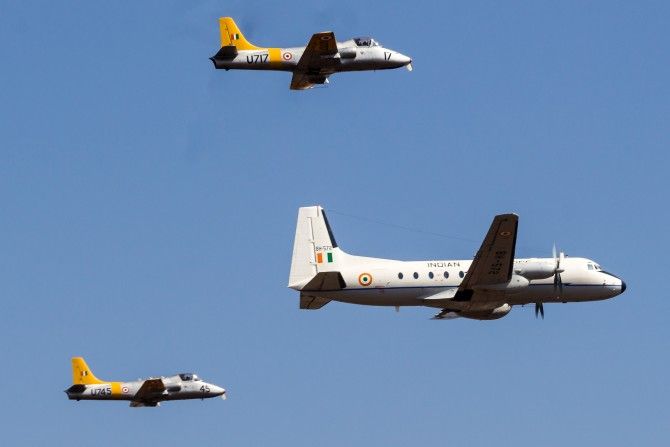 BH572 was the first IAF-built Hawker Siddeley HS-748 'Avro' from Kanpur. The aircraft first flew on November 1, 1961, and subsequently flew demo flights in the Far East.

The Hawker Siddeley HS 748 is a medium-sized turboprop airliner originally designed by the British firm Avro in the late 1950s as a replacement for the aging DC-3s, then in widespread service as feeder-liners.

The Avro concentrated on performance, notably for STOL operations, and found a dedicated market. Some 380 aircraft were built by the Hawker Siddeley.

A larger, stretched development of the HS 748, the BAe ATP, attempted to compete with the de Havilland Canada Dash 8 but saw a limited production run.

The Kiran was designed to meet an Indian Air Force requirement for an intermediate jet trainer.

The first aircraft, powered by the Rolls Royce Viper Mk 11, was flown for the first time on September 4, 1964.The production aircraft was designated "Kiran I", and the first pre-production deliveries were made to the Indian Air Force in March 1968.

Later production aircraft were fitted with hard-points under each wing for weapon training and re-designated as "KiranIA".

A total of 190 Mk I and 1A aircraft were built. An uprated version powered by a 4,200 lbf (19,000 N) thrust Bristol Siddeley Orpheus engine and enhanced weapon-carrying capability was designated "Kiran II", which first flew on July 30, 1976, and deliveries commenced in 1985, with 61 delivered by the time production ended in 1989.

The B52 Bomber flying from Guam The Boeing B-52 Stratofortress is an American long-range, subsonic, jet-powered strategic bomber.

The B-52 was designed and built by Boeing, which has continued to provide support and upgrades. It has been operated by the United States Air Force since the 1950s.

This B-52 was flown all the way the Andersen USAF base at Guam for the Aero India and it made a dramatic pass-by. The Dakota was manufactured by Douglas Aircraft Company, United States, in 1935. It was inducted in the IAF in 1946 and played an invaluable role during the 1947 Kashmir operations.

The aircraft touches a max speed of 215 mph and its max range is 2430 km. It has a typical passenger layout for 28-32 passengers. The DRDO Airborne Early Warning and Control System (AEWACS) is a project of India's Defence Research and Development Organisation to develop an airborne early warning and control system for the Indian Air Force. It is also referred to as the DRDO NETRA AEW&CS system.

The Sukhoi Su-30 MKI is an air superiority fighter jointly developed by Russia's Sukhoi and India's HAL for the Indian Air Force. The Su-30 is a multi-role two-seat long-range interception and air standing patrol powered with two AI-31FP turbofans with TVC. The Do-228 is the only "Make in India" aircraft ideally suited for regional connectivity under the RCS-UDAN. It can operate from all regional airports in India.

The Hawk-i (india) is the indigeneously upgraded Hawk Mk 132 aircraft, with enhanced operational and training capabilities. The Hawk MK 132 is an advanced jet trainer, with tandem seats meant to provide basic, advanced flying and weapons training.

It can be used as a ground attack aircraft or for air defence. The aircraft was produced at HAL under licence from BAes, the UK.

The HAWK-i programme was taken up by HAL in an effort to be self-reliant in matters such as integration of new sub-systems or modifications, obsolesence management of avionics systems and to enhance the aircraft operational and training capabilities of the Hawk aircraft.

The HTT-40 would be used for basic flight training, aerobatics, instrument flying and close formation flights whereas its secondary roles would include navigation and night flying. The Boeing P-8I "Neptune" is a long-range, multi-role maritime patrol aircraft which is a derivative of the P-8A of US Navy, built for the Indian Navy.

The P-8I is specifically built for maritime surveillance and is the perfect replacement for the ageing Tu-142M maritime patrol aircraft of Soviet origin. The aircraft can perform basic surveillance missions to combat operations too. 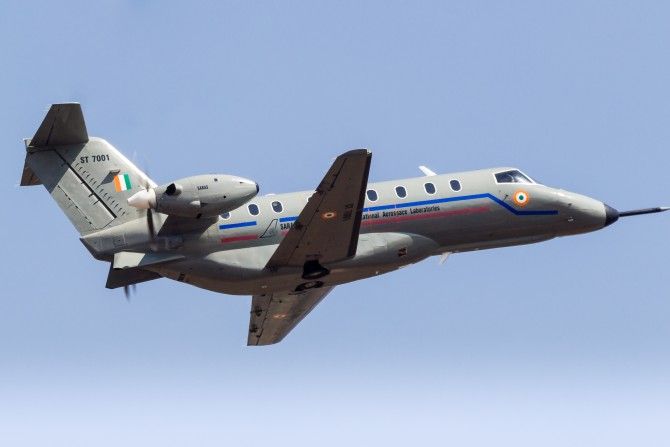 The Saras has been designed by the National Aerospace Laboratories in Bengaluru, and is being tested by pilots from the Indian Air Force.

The Saras Mk 2 will be ideal for commuter connectivity under the Udaan scheme for a variety of applications like air taxi, aerial search, survey, executive transport, disaster management, border patrol, coast guard, ambulance and other community services. The Tejas, Jaguar, Sukhoi Su-30 MKI were flown in missing man formation in honour of Wing Commander Sahil Gandhi who was killed in a crash on Tuesday while practising in Surya Kiran for Aero India.

The Sukhoi Su-30 MKI is an air superiority fighter jointly developed by Russia's Sukhoi and India's HAL for the Indian Air Force. The Su-30 is a multi-role, two-seat long range interception and air standing patrol powered with two AI-31FP turbofans with TVC.

The Jaguar is a deep strike penetration aircraft in service of the IAF since 1978, and is still in service in a significantly upgraded form.

This is a ground attack fighter, and a maritime role aircraft powered by two Rolls Royce Turbomeca Adour MK 811 turbo fan jet engine producing 3740 kgf with afterburn. The maximum speed is 840mph with a combat radius of 575 km. This aircraft has participated in the Kargil war operations in 1999 and dropped conventional bombs on infiltrators.

The Tejas is a single-seat, single-jet engine multirole light fighter designed by the Aeronautical Development Agency (ADA) and HAL for Indian Air Force and Indian Navy.

It is the smallest and lightest in its class of contemporary supersonic combat aircraft.