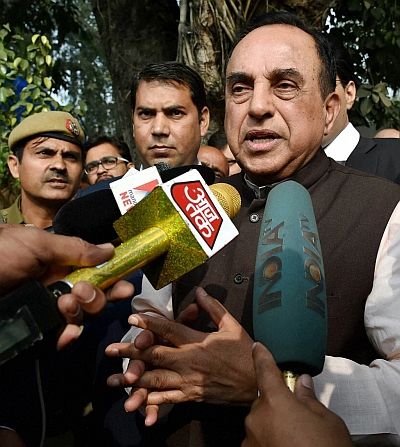 Former Haryana chief minister and Congress leader B S Hooda was on Saturday arrayed as a witness by Bharatiya Janata Party MP Subramanian Swamy in support of his complaint filed against Congress president Sonia Gandhi, vice-president Rahul Gandhi and others in the National Herald case.

During the hearing, Swamy also filed a copy of Central Bureau of Investigation case documents in Panchkula plot allotment matter and claimed that even the Enforcement Directorate has filed a case in the same matter and reportedly questioned Hooda, Robert Vadra and Motilal Vora on alleged money laundering with regard to
Associate Journals Ltd.

The submission was, however, opposed by the counsel appearing for the Gandhis and others who claimed that CBI and ED matters were not related to the present complaint of Swamy.

The court then told Swamy that if he was submitting that the ongoing probe by the agencies were connected with his complaint, then the present proceedings before it had to be stayed.

However, Swamy said that he needed time to verify whether the CBI and ED cases in the Panchkula matter were connected to the present matter.

The court has now posted the matter for further hearing on May 15 with a direction to Swamy to file a written submission about the relation of the CBI and ED matters with the current complaint.

Swamy, in his private criminal complaint, has accused the Gandhis and others of conspiring to cheat and misappropriate funds by paying just Rs 50 lakh through which Young Indian Pvt Ltd (YI) obtained the right to recover Rs 90.25 crore which Associate Journals Limited (AJL) owed to the Congress.

The Gandhis had on March 25 opposed as ‘vague and devoid of material particulars’ Swamy’s plea seeking summoning of witnesses whose names he had filed earlier.

The Gandhis, who are accused in the case along with some other Congress leaders, contended that Swamy's plea was ‘in the nature of a fishing and roving enquiry which is not permissible in law’.

The submissions were made in the reply filed to Swamy’s list of witnesses and other evidence given to the court.

Swamy had on February 10 filed the list of witnesses before the court which had on December 26 last year given him the last opportunity to submit the list.

In a relief to Sonia and Rahul, the court had earlier rejected ‘as fishing enquiry’ a plea of Swamy seeking a direction to the Congress party and AJL to produce certain records relating to the case.

The Gandhis and other accused -- Motilal Vora, Oscar Fernandes, Suman Dubey and Sam Pitroda -- have denied the allegations levelled against them.

The court had summoned the accused persons, besides YI on June 26, 2014.

On December 19, 2015, it had granted bail to Sonia, Rahul, Vora, Fernandes and Dubey, who had appeared before it pursuant to summons. Pitroda was granted bail on February 20, 2016 when he had appeared in the court.