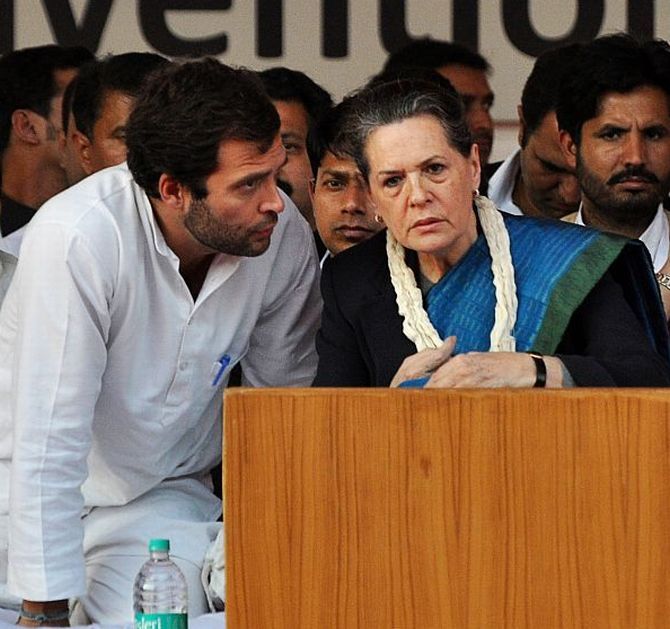 The National Herald case on Tuesday created a political storm with the Congress paralysing Parliament, accusing the government of 'political vendetta' against its leaders, a charge strongly denied by Finance Minister Arun Jaitley, who asked Sonia and Rahul Gandhi to face the trial.

Asserting that the Congress party and its leaders have a lot to answer for, Jaitley dared them for a debate on the matter in Parliament instead of disrupting it on Wednesday.

A day after the Delhi high court dismissed the plea of the Gandhis and others for quashing of summons in the Herald case, Congress members forced repeated adjournments in both Houses of Parliament shouting slogans against the government.

No business could be transacted before the final adjournment a little after 3 pm.

Meanwhile, a local court on Tuesday gave the Gandhis and four other accused exemption from personal appearance for the day but asked them to be present on December 19 when the case will be heard.

After a strategy meeting at the Parliament House before start of proceedings, Sonia Gandhi said, "I am the daughter-in-law of Indira Gandhi. I am not scared of anyone. I am not disturbed."

She invoked the legacy of the late prime minister when she was asked to comment on a Union minister's comment 'why is she afraid of facing the court'.

Speaking in Cuddalore, the Congress vice president said he 'absolutely' saw 'political vendetta' alleging that the Centre thinks it can stop him from asking questions.

"That is not going to happen. This is the way the central government functions. I absolutely see a political vendetta," he said.

Later, speaking to reporters in Chennai, Rahul dared the government to do 'whatever they want to do' but he would not back off an inch.

"I have said before, they will do what they will. I will do my job in the Opposition, which is to ask questions from the government. I am not afraid of these things. I will not back off even an inch. Let them do whatever they want to do," he said.

In the Rajya Sabha, Leader of the Opposition Ghulam Nabi Azad said it is painful to see the ‘atmosphere of political vendetta' in the country where ruling party seems all out to make an 'opposition-free India' for the past one-and-a-half-years.

Rejecting Azad's allegation, Jaitley said, "This government has not done anything illegal against anyone.... In case of the Congress leaders, it is not the action of the government but that of the judiciary.... The court has summoned them and not the government. Give your reply to them."

Contending that there was 'misrepresentation of facts', he said, "The government is ready for any discussion...There are serious allegations on Congress leaders."

Jaitley said such practices were done by the Congress earlier and the government was ready to discuss this issue immediately as it wanted to place the facts before Parliament and before the country.

Soon after the Houses were adjourned for the day, Jaitley spoke to media, attacking the Congress for its tactics of stalling Parliament.

He asked Sonia and Rahul to face the courts, saying India is not a banana republic in which Parliament or media can decide the guilt or innocence in such matters.

"There is no political vendetta. A private complaint was lodged. The government had nothing to do with it. The high court has dismissed their case and asked them to go and face the trial. Nobody in this country has immunity from law. They can challenge the orders in a higher court or face proceedings," he said.

Jaitley said the substance of the court proceedings is that a political party -- Congress -- collects funds for political purpose, gets tax exemption but, by a series of transactions, those funds have been transferred to a trust and then to a company, which is closely held.

Jaitley said the Gandhis were rattled and were adopting needless aggression.