'We have to ascertain whether they are prepared to live the life they chose after surgery.'
A Ganesh Nadar reports. 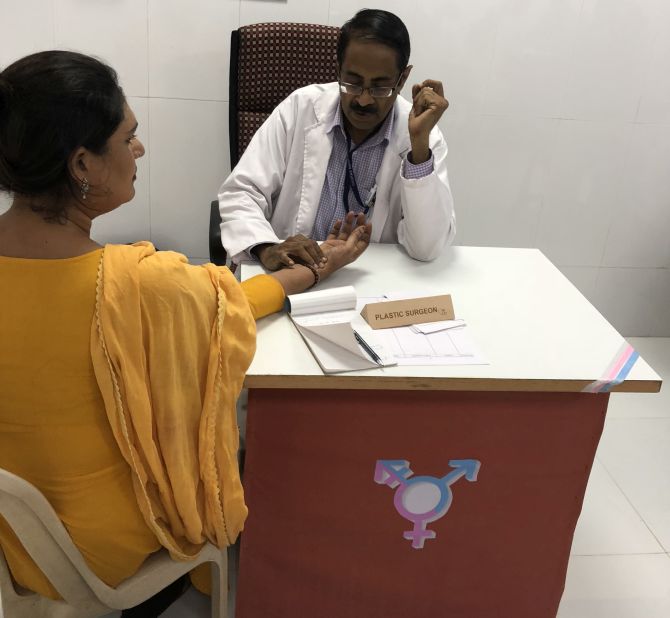 IMAGE: Dr Jagan Mohan, who is in charge of the sex reassignment clinic at the Rajiv Gandhi government general hospital in Chennai, examines a transgender patient. Photographs: A Ganesh Nadar/Rediff.com

Tamil Nadu is only the second state in India to set up a clinic exclusively for transgenders, to provide sex reassignment surgeries free of cost.

The first one was started in Kerala two years ago and the second one was inaugurated in Tamil Nadu in June at the Rajiv Gandhi government general hospital in Chennai.

The clinic is open once a week, on Fridays between 9 am and 1 pm.

The Friday I visited the clinic, there were a few transgenders consulting the doctors.

"We started this clinic because otherwise they would have to go to various departments to get what they need. Here all the needed doctors sit together for the convenience of the patients. Last week there were some patients, and today a few more," says Dr Jagan Mohan, head of the department of plastic surgery who is in charge of the clinic.

The clinic has been averaging 40 patients a month. At the clinic's inauguration in June, Tamil Nadu Health Minister C Vijaya Bhaskar said the hospital had performed 17 sex realignment surgeries in the last three years free of cost, which costs up to Rs 300,000 in private hospitals.

There are protocols to follow for those wanting to undergo sex change operations.

The clinic has four doctors sitting in four corners of the room -- a plastic surgeon, a venereologist, an endocrinologist and a psychiatrist who need to be consulted by the transgender person.

As the surgery is irreversible, the hospital seeks an affidavit from the patient that they are doing so on their own and are solely responsible for the end results.

But the process is a lengthy one. The patients will have to see the psychiatrist for a year before they give the go-ahead for surgery.

"We have to ascertain whether they are prepared to live the life they chose after surgery. You have to remember that they have to face the same society they live in, but as the opposite gender of what they have been all their lives," Dr Jagan Mohan explains.

"When a man wants to become a woman because in his mind he feels he is one, we first ask him to dress up as a woman and face society. If he cannot do that, then the surgery is pointless. Just think, if after surgery he continues to dress up like a man because he is ashamed of the surgery, what then?" adds Dr Jagan Mohan.

"So we first prepare him for that and only when we feel he or she will manage in society does the psychiatrist recommend surgery," says Dr Jagan Mohan. 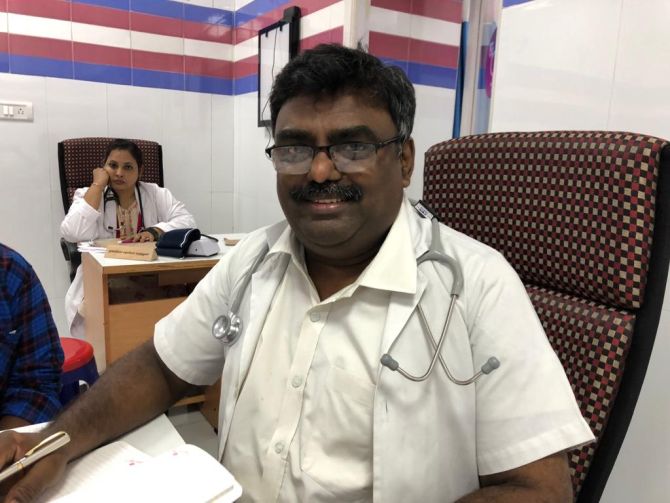 "The first thing they always mention is that they are not comfortable with their present gender. They talk about their suffering," says psychiatrist Dr M S P Saravanan, who has been practising for 20 years.

"Then there are those who want a change because of the situation they are in. A woman feels that if she was a male people would treat her differently or vice versa. Then there are men who like to make themselves beautiful, so they want to become women," Dr Saravanan adds.

"There are also histrionic traits. Subconsciously they have already changed. This can happen owing to genetic predisposition or hormonal imbalance."

"Social constraints add to their problems and their desire to change is reaffirmed because of society. They have to face psycho-social pressures," says Dr Saravanan. "We ask them to come for consultations for a year. Some may drop out during the course of the year which means they have decided to stay the way they are."

The accepted ages for undergoing sex reassignment surgery is between 18 and 40. It is illegal if done to a younger person, while after 40 if someone has lived with the body they are born with for so long, they are usually used to it or have learnt to live with it.

Only after the psychiatrist gives the go-ahead does the endocrinologist start the hormone therapy.

In a man's body, the hormone therapy leads to growth of breasts to which silicon is added later for size, and through surgery a vulva is provided. But there is no uterus, so there is no chance of childbirth, which is made very clear to the patients.

One of the patients at the transgender clinic spoke to A Ganesh Nadar.

"I lost my mother when I was 5 years old. My father married again and my stepmother had two children. She was always partial towards them. I used to feel that she wouldn't dare treat me like that if I was a boy."

"Then in school I fell in love with my teacher and told her. Being a teacher she understood and accepted my love. I was heartbroken when she got married and moved away."

"I have told my pastor my leanings. He told me I must do what makes me happy, he also told my family that they must let me be happy."

"Now I am in love with another girl. She knows I am a man in a woman's body and has accepted my love. She is supportive of sex change surgery."

"I work in a firm and always dress up like a man. Both of us know we cannot have children, but that doesn't bother us. We will adopt when we feel the need for children."

In case of a woman wanting to become a man, they first remove the breasts and also create a penis out of the patient's own flesh, after adding either a small bone or cartilage to make it stiff. The patients are informed that unlike a natural penis this will not change shape or size during intercourse.

"After we started this clinic in June, three male patients who had been meeting us from earlier on for over a year have been operated upon. We changed them to females," Dr Jagan Mohan adds.

"Later this month we will perform another surgery where we will change a female to a male. This surgery is more complex."

Once the surgery is successful, the ENT surgeon will make voice alterations if necessary to suit the new gender.

Sounds straight enough detailing with men wanting to become women and vice versa, what about inter-sex persons, that is, those with congenital sexual ambiguity?

Dr Jagan Mohan provides an answer: "Intersex people are individuals born with any of several variations in sex characteristics including chromosomes, gonads, sex hormones, or genitals. Such variations may involve genital ambiguity, and combinations of chromosomal genotype and sexual phenotype other than XY male and XX female."

"Parents of some intersex infants and children with ambiguous outer genitalia may request surgery or hormonal therapy to alter the sex of the child according to their choice, in order to make them attain more socially acceptable sex characteristics."

"But some of these children, when they grow up, may identify themselves as belonging to a gender other than what they were assigned by parents. As any sex change surgery is irreversible, it should not be performed on the intersex children."

"Only after they attain 18 years should they be offered medical examination supported by lab investigations and given counseling. Only after they choose their gender -- the choice being supported by a legal document -- any sex change surgery if necessary can be performed. Surgeries do not assure ability to procreate."