Traffic on the Jammu-Srinagar national highway was suspended due to lurking threat of floods in the Valley, leaving hundreds of commuters stranded. 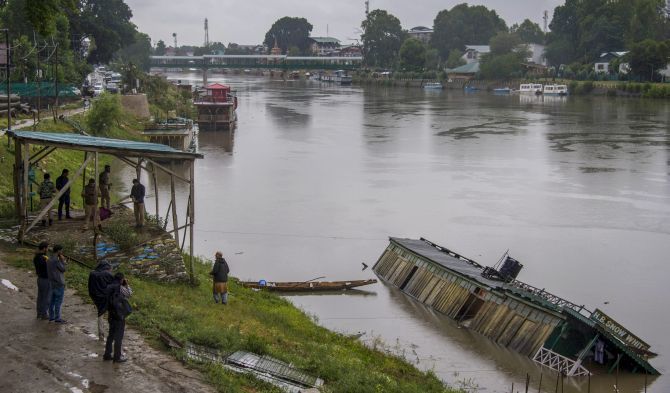 Three persons, including a woman, were killed and nearly a dozen houses damaged in rain-related incidents in different districts of the Jammu region, officials said on Saturday.

Meanwhile, intermittent rains continued in Kashmir with authorities sounding a flood alert in central Kashmir, even as water levels started receding in the southern parts of the valley.

Harbans Lal, 45, was washed away by flash floods in a stream near his house at Natulphal village of Khour in the Akhnoor sector of Jammu on Saturday afternoon, they said.

The officials said Lal was crossing the stream when a sudden surge in the water level due to incessant rains caught him.

The body of the deceased was recovered and handed over to his family, they said.

A woman, identified as Jameela, was killed when a tree got uprooted due to heavy rains and fell on her temporary shelter at Kalamsatherdhar village of Kishtwar district, the officials said.

Jameela's daughter was also injured in the incident and was shifted to a hospital, they said.

A 22-year-old man, Anzar Ahmad, was also washed away by flash floods in a stream at the Surankote area of Poonch district on Friday and his body was recovered, the officials said.

Nearly a dozen 'kacha' houses were also damaged, while 28 cattle were perished in the heavy rains in different districts, especially in the areas in the Chinab Valley over the past three days. 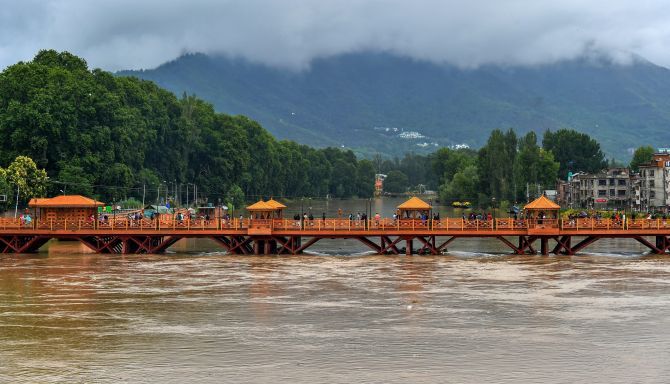 Several footbridges, including two in Udhampur district, were also washed away by the strong currents as most of the water bodies across the region are flooded.

Six men, who got trapped in the middle of the Tawi river near Pukroo here last night due to sudden rise in the water, were rescued, the officials said.

Some machines, including a dumber, were damaged at the site of the 48-MW hydel project at Kalnai, a tributary of the Chenab river in Doda district, besides an ordinary bund meant to divert river water was damaged in the flash floods.

The revenue teams are accessing the damage caused due to the flood like situation, the officials said.

Monsoon rains hit the region on Wednesday and was continuing intermittently since then.

However, the hilly areas of the Jammu regions, including Ramban, Doda, Kishtwar, Poonch, Rajouri and Reasi districts, experienced heavy rains over the past two days.

The authorities had on Friday issued a flood alert in south Kashmir.

On Saturday they issued a flood alert for low-lying areas of the central Kashmir, including the summer capital here, and asked the people to be alert and prepared for evacuation.

The schools across the valley were closed for Saturday in view of the inclement weather.

Traffic on the Jammu-Srinagar national highway was suspended due to lurking threat of floods in the Valley, leaving hundreds of commuters stranded, officials said.

Srinagar-bound vehicles were stopped at various places between Ramban and Banihal along the highway around 2 pm as a precautionary measure in view of the emerging situation in the Valley in the aftermath of heavy rains over the past several days, the officials said.

Hundreds of vehicles heading for Srinagar were left stranded at various places on the highway and local administration are making arrangements for the accommodation of the passengers for the night.

The passengers are being provided accommodation in various government buildings, including schools, the officials said.

However, the officials said the vehicles heading for Jammu, including trucks, were allowed to move on the highway which is otherwise open for traffic.

The fleet of vehicles, carrying over 2,000 Amarnath pilgrims, also crossed the Jawahar Tunnel -- the gateway to the Kashmir Valley -- around noon and had reached the Pahalgam base camp, they said.

The pilgrims were left stranded in Udhampur district on Friday after landslides and shooting of stones caused disruption in the smooth flow of the traffic and left for the Valley on Saturday morning.