Torrential rains pounded the tiny Himalayan state of Sikkim and the tea growing region of North Bengal, causing landslides that cut off National Highway-10, the main road linking Gangtok with the rest of the country. 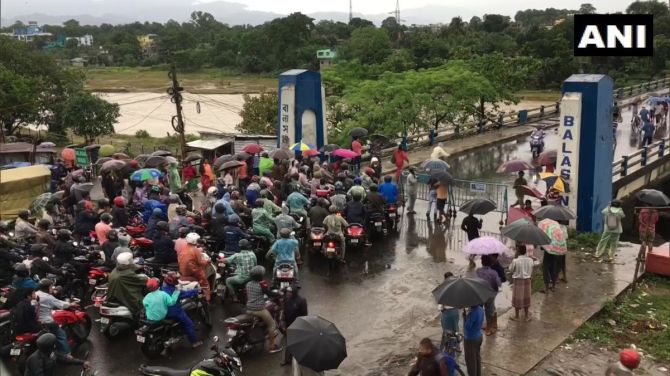 Normal life came to a near standstill as showers triggered landslides causing damages to roads and bridges, halting or constricting traffic in various places in North Bengal's hill districts of Darjeeling and Kalimpong, while low-lying areas in the plains of Jalpaiguri and Alipurduar districts were flooded, officials said on Wednesday.

Hundreds of tourists, who have thronged the hills during the Durga Puja season, are facing difficulties in travelling to their next destination or reaching railway stations or the Bagdogra airport to return home, owing to the incessant rain and landslides.

The Met department has issued a 'red' warning for Darjeeling, Kalimpong and Alipurduar, forecasting extremely heavy rain at one or two places in these districts till Thursday morning.

The incessant downpour on Wednesday saw landslides blocking the crucial National Highway-10, connecting Siliguri with Gangtok, at the 29th Mile area in West Bengal, around 60 km from the Himalayan state's Rangpo border.

Darjeeling District Magistrate S Ponnambalam said the main thoroughfares in the district are open, though some of the interior roads were affected by landslides.

Attempts are on to remove the debris from the road to reopen it to traffic as soon as possible, he said.

Supporting pillars of a steel bridge at Rangpo, the gateway to Sikkim, were also damaged as the Teesta river which has been in spate over the past few days, swept embankments at many points.

Local police have started restricting movement of vehicles on the bridge. A large number of people have been taken to safe places and relief materials have been sent to the affected areas.

A key road bridge over the Balason river at Matigara near Siliguri suffered "settlement" owing to heavy rain, an official said.

He said vehicular traffic on it will resume only after safety tests of the bridge.

Siliguri police commissioner Gaurav Sharma said that traffic, except two-wheelers, were being diverted through another route via Naukaghat bridge owing to the damage.

A political blame game started amid this situation, with the  BJP MLA Anandamoy Barman accusing the Trinamool Congress government of failing to maintain it and non-cooperation in implementing a central government project for four-laning of the road on which the bridge is located.

Chairman of the board of administrators of Siliguri Municipal Corporation Gautam Deb rejected the claim, saying that the health of all road bridges is checked regularly.

Several low-lying areas at Malbazar, Moynaguri and Dhupguri in Jalpaiguri district have been flooded owing to rise in water level of Teesta and Jaldhaka rivers.

People from many of these areas have been shifted to flood shelters, a Jalpaiguri district official said.

As the downpour continued, 3,800 cusec of waster was released from Bengal's Gajaoldoba Teesta Barrage, causing inundation in several parts of the low lying town of Jalpaiguri.

Gajaldoba in Jalpaiguri received the highest rainfall in the state in 24 hours till 8.30 am on Wednesday at 340 mm rainfall, the Met department said.

The Met department warned that the inclement weather will continue in the sub-Himalayan districts till Thursday morning.

Jalpaiguri and Coochbehar are likely to receive heavy to very heavy rain, it said.

Weather in the south Bengal districts, which were lashed by heavy rain since Sunday owing to a low pressure system, improved considerably on Wednesday, though the sky remained overcast.

The Met department has forecast thunderstorms with lightning at one or two places in these districts on Wednesday.

Dry weather will prevail in the southern part of the state from Thursday, it said.