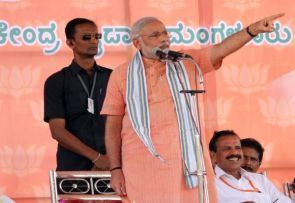 Congress on Tuesday took a dig at the Bharatiya Janata Party for its move to charge Rs 5 per ticket for attending Narendra Modi's public meeting in Hyderabad, saying it shows the "true value" of the Gujarat chief minister.

In a bid to cash in on Modi's popularity, BJP's Andhra Pradesh unit is collecting a registration fee of Rs 5 per person to attend the public meeting. Modi, the newly appointed election campaign committee chief, will address the meeting on August 11.

The party has said that it would contribute the collected amount towards Uttarakhand flood relief.

The Lal Bahadur Stadium in central Hyderabad is the venue for the meeting and the target is to mobilise one lakh people in the age group of 18-40.

The BJP has already started registration process and it will continue till August 10.

BJP leaders have said that the party aims to reach out to the large crowd of IT professionals and college students in the tech-savvy Andhra Pradesh capital.