'He was killed by Kashmir terrorists because he was Hindu'

The killing of Ranjit Singh in a grenade attack by terrorists in north Kashmir's Baramulla district has snatched away his family's sole breadwinner. 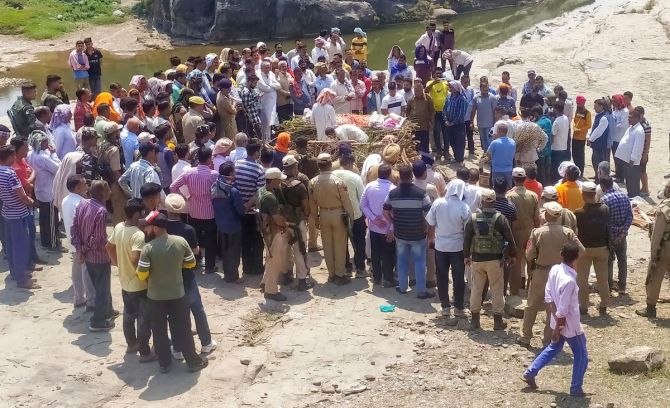 IMAGE: Family members and relatives gather for the funeral of Ranjeet Singh, at his village in Sunderbani near Rajouri. Photograph: PTI Photo

Singh had infused the hope of a better life in his family of seven, living below the poverty line, when he took up the job of a salesman at a newly-opened liquor shop in Baramulla, 470 kms from his home in Rajouri.

But their hopes were dashed Tuesday evening when he was killed in a grenade attack -- just 20 days after he had joined the shop.

On the day of the incident, Singh was at the shop when a burqa-clad terrorist had walked up to it, dropped a grenade inside through the porthole window, causing an explosion which had killed him and left three other employees injured.

The injured employees have been identified as Govardhan Singh, Ravi Kumar, both residents of Billawar in Kathua, and Govind Singh, a resident of Kangra in Rajouri.

"The terrorists snatched the lone bread-earner of my family," Ranjit Singh's daughter Shivani told mediapersons after the cremation of her father's body Wednesday.

"It is not a crime to be a Hindu. Hindus can also work in Kashmir. It is not their (Islamic) State."

Singh's second daughter Priyanka says her father had left for the new job in Kashmir about 20 days ago.

"We hoped that now our lives would become better. But terrorist shattered our dreams. What will we do now? Who will feed us? We have a family to feed? They snatched our only bread-earner. They killed our father," she said.

She also asked questions of those who carry out such attacked, and also to their sympathisers.

"I want to ask them -- what mistake did my father commit by working in Kashmir to feed his family? What did my father do to them? Has he done any wrong to them?"

Singh used to work as a daily wage labourer before he got the job at the Baramulla liquor shop.

"He was a Hindu that is why he was killed by terrorists of Kashmir. He had gone to a place so far from home to feed his family. He was just a labourer. We feed our family by working as a labourer. He was our lone bread-earner. He is no longer with us," she said.

Hundreds of mourners gathered at Ranjit Singh's home in Bakra on Wednesday morning when his mortal remains reached from Baramulla.

They kept his body on the highway to block it and raised slogans against Pakistan-sponsored terrorists, demanding an end to killing of Hindus in Kashmir.

The cremation was conducted after authorities intervened.

The protesters demanded Rs 25 lakh compensation for the family and a government job to a member.

Anil Bhatt
© Copyright 2022 PTI. All rights reserved. Republication or redistribution of PTI content, including by framing or similar means, is expressly prohibited without the prior written consent.