The Bombay high court on Wednesday transferred the investigation into activist Govind Pansare's murder to the Maharashtra Anti-Terrorism Squad. 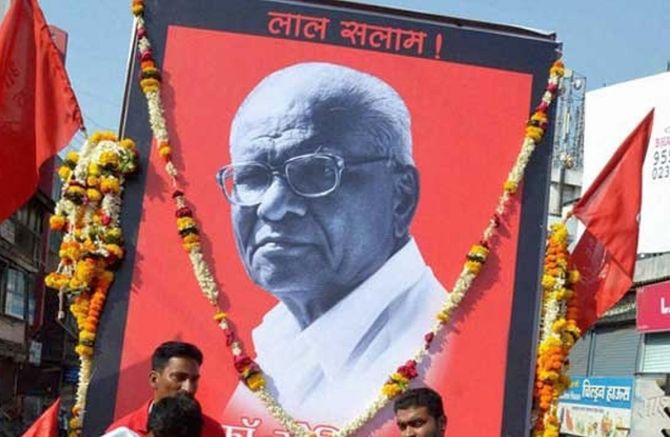 A Special Investigation Team of the Maharashtra Criminal Investigation Department was investigating the case till now. The probe into the case was transferred more than seven years after Pansare was murdered.

A division bench of Justices Revati Mohite Dere and Sharmila Deshmukh said it was allowing the application filed by Pansare's family members and transferring the probe to the ATS.

The SIT was constituted in 2015 following a Bombay High Court order passed on a plea filed by Pansare's family members seeking such a special team.

Pansare was shot at on February 16, 2015 in Kolhapur and succumbed to his injuries a few days later on February 20.

The CID was probing the case and had arrested a few people.

The activist's family members last month filed an application in the high court seeking for the probe to be transferred to the ATS claiming that the SIT has not been able to make a breakthrough in the case yet.

Senior counsel Ashok Mundargi, appearing for the SIT, told the court that it does not have any objection if the probe is transferred to the ATS, as that too is a state government agency.

"We are agreeable. The ATS can be appointed and for continuation, a few officers from the SIT shall assist the ATS," Mundargi said.

When the court questioned as to which senior officer would be heading the probe, Mundargi said Additional Director General (ADG) was the senior most officer of the ATS and he would supervise the probe.

Advocate Abhay Nevagi, appearing for Pansare's family told the court that the masterminds behind the killing and the shooters are still unidentified and at large.

"According to the SIT, there are around 40 more persons in the hitlist of the people behind Pansare's killing. This includes his family members, the family of slain rationalist Narendra Dabholkar and Medha Patkar. We only want the masterminds to be nabbed," Nevagi said.

The court on Wednesday also refused to consider applications filed by three accused, arrested in the Dabholkar and Pansare killing case, opposing the probe to be transferred to another agency at this stage.

Both Mundargi and Nevagi opposed the application arguing that the accused persons have no say on which agency should be probing the case.

Nevagi had earlier this week told the bench that whatever headway had been made into the killings of Pansare, rationalist leader Narendra Dabholkar, Kannada scholar MM Kalburgi, and journalist Gauri Lankesh, had been made by the ATS following arrests of some men in 2018 at Nalasopara in neighbouring Palghar district.

In this case, the ATS had arrested Vaibhav Raut, Sharad Kalaskar and Sudhanwa Gondhalekar. Kalsakar revealed during his interrogation that absconding accused Sachin Andure and Vinay Pawar were the alleged shooters in the Pansare case.

The Pansare family hence sought for the probe to be transferred to the ATS.