HC to announce verdict on Deshmukh, Malik plea to vote in MLC polls on Friday 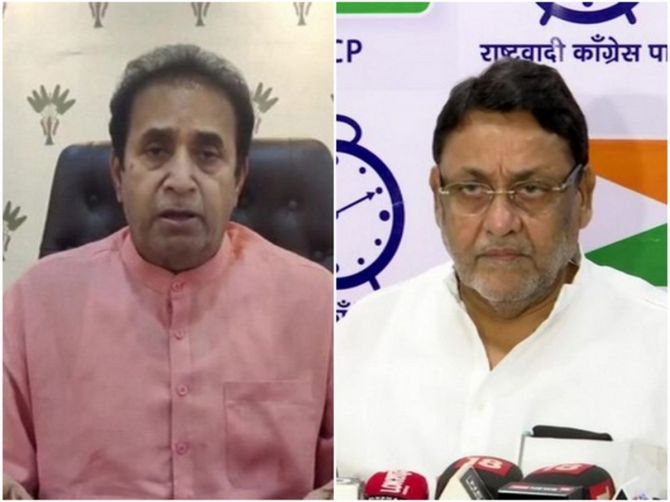 Justice N J Jamadar on Thursday heard extensive arguments by all sides and reserved the verdict for Friday.

During the day's hearing, senior counsel Amit Desai, who appeared for Malik, said the minister's case was a simple request for going under escort, while being in the court's custody, to cast his vote.

Desai said though section 62(5) of the Representation of the People Act imposed a prohibition or an embargo on those in prison from voting, such prohibition was on account of "physical difficulties" such as arranging for security and creating requisite infrastructure for prison inmates to vote.

"He (Malik) is currently in a hospital and not confined inside a prison. He is also yet to be convicted, so he is not disqualified from the process of casting his vote," Desai said.

He also argued that the court had the discretion to grant requisite permission in the present case.

"Can there be a case that an undertrial, who has the presumption of innocence, the case against whom hasn't even been opened in the court, is deprived of his right to vote in a democracy? Or, that he is excluded from a democratic process?" Desai said.

Senior counsel Vikram Chaudhri, who appeared for Deshmukh, said though section 62(5) of the Representation of the People Act imposed restrictions and "fettered the right of a prisoner to cast his vote," the court had "unfettered powers" to exercise its discretion.

Additional solicitor general Anil Singh, who appeared for the Enforcement Directorate, argued that the court exercising discretion in the present case would prove contrary to the embargo imposed by law.

"So, I will request this court to refrain from exercising its discretion," Singh said.

"The law says if one is in prison, one cannot vote. So, if one is released, even with an escort, for casting one's vote, then what is the purpose of 62(5)? Besides, they are asking for facilities such as escort," Singh said.

Justice Jamadar, however, said the case at present was not one of regular elections.

"These are MLC elections. He (Malik and Deshmukh) is in jail on charges for something he has allegedly done in his personal capacity," Justice Jamadar said.

"The election to the legislative council is indirect. Would it not deprive the electorate of that constituency, if the elected member was sent to jail for actions in his personal capacity?" he said.

Singh, however, said politicians should challenge the legal provisions and approach Parliament if they had a grouse.

Deshmukh was arrested by the Enforcement Directorate in a money laundering case in November last year.

Malik was arrested by the ED on February 23 this year in connection with a separate money laundering probe linked to the activities of fugitive gangster Dawood Ibrahim and his aides.

Both the NCP leaders are currently in judicial custody.

The biennial elections for 10 vacant seats of the Upper House of the state Legislature will be held on next Monday.

Members of the state legislative assembly constitute the electoral college for these polls.

Eleven candidates are in the fray. The opposition Bharatiya Janata Party has fielded five candidates, while the Shiv Sena, the NCP and the Congress, all constituents of the ruling MVA, have given tickets to two nominees each.