The Delhi high court on Friday directed the Delhi government and the police to ensure that the number of Afghan nationals, protesting outside the UNHCR office in New Delhi and seeking refugee status, is suitably reduced and they strictly follow Covid-19 appropriate protocol. 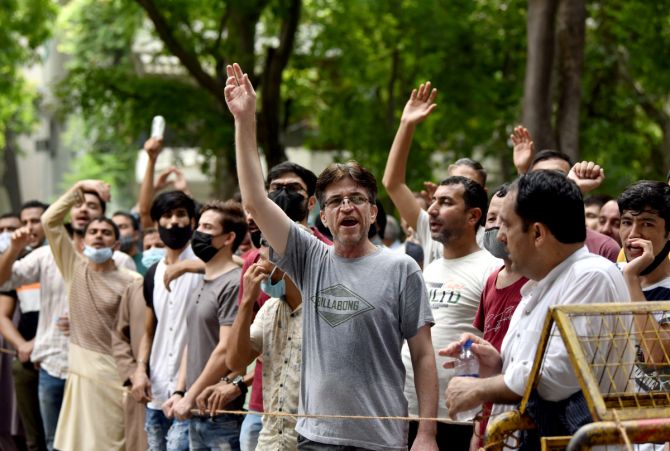 Stating that the law is the same for everybody, the high court questioned the authorities as to how there can be 500 persons gathered for protest when the guidelines do not permit it.

The court was hearing a petition by Vasant Vihar Welfare Association which stated that the foreign nationals (refugees/ asylum seekers) have gathered outside the office of the United Nations High Commissioner of Refugees at B Block in South Delhi's Vasant Vihar since August 15, including lanes and parks adjoining it, and that residents are facing difficulties due to this.

When the Centre's counsel, referring to Afghanistan's political crisis, said the situation was not normal and unprecedented, the court made it clear that there was no question being unreasonably harsh to anybody but the law is same for everybody.

”Nobody is stopping them from protesting. Firstly they are at the wrong place. It is not a designated protest site. Plus, as per the Covid-19 guidelines, more than 100 people cannot gather. I will have to direct that there should not be more than 100 people. How can there be 500 protestors, what is this exception of 500 for refugees?” Justice Rekha Palli said, adding that 100 people are allowed for marriage purpose and here there are 500 persons gathered in a protest.

The counsel for Delhi police said that as per the Delhi Disaster Management Authority guidelines, all social/ political/ sports/ entertainment/ cultural/ religious/ festival related gatherings and congregations are prohibited during the pandemic.

Central government standing counsel Ajay Digpaul said the issue must be seen from a humanitarian angle and urged the court to grant some more time to take a holistic view for resolving the issue.

The court granted time and listed the matter for further hearing on September 7, saying if the matter is not resolved by then, it will be constrained to pass an order.

”In the meantime, respondents 3 and 4 (Delhi police and Delhi government) will ensure that Covid-19 protocols are strictly maintained and also ensure that the number of people protesting at the site be suitably reduced,” the judge said, adding that the city can't be put to risk.

During the hearing, the court further observed that it has not been denied by the Delhi government and police, represented through additional standing counsel Satyakam, that the congregation is in the teeth of the DDMA order and it does appear that the petitioners are justified in urging that these protestors be shifted to designated place forthwith.

The police counsel informed the court that in terms of the Supreme Court's direction, an office order was issued on November 22, 2018, clearly setting out that peaceful protests can only happen at Jantar Mantar, Ramlila Ground and Boat Club in Delhi.

Regarding the court's observation that the large gathering of people could act as a super spreader of coronavirus as there was lack of adherence to Covid-19 appropriate norms, the counsel placed photographs showing that protestors were wearing masks and following social distancing.

The police's counsel further said children are also there in the protest for some duration and the officers have tried to persuade the protestors to shift but they are not agreeable and the only option left is to push them away which was not done since it was a sensitive issue having international ramifications.

The court had earlier issued notices to the ministries of home affairs and external affairs, Delhi government, Delhi police, South Delhi Municipal Corporation and Delhi Jal Board on the petition.

The petitioner association, represented through advocate Hrishikesh Baruah, said the number of such foreign nationals from Afghanistan has increased manifold in the past week owing to the takeover of Afghanistan by Taliban forces, forcing many to seek asylum in different countries including India.

It said the residents were facing difficulties in commuting and going to markets for purchasing essential goods and people are staying there, littering, defecating in the open and encroaching upon the area and they are probably not even vaccinated for Covid-19.

The petition said the area has turned into a protest site where people from all age groups, including children, are congregating and added that putting children in a situation, especially where the third wave of Covid-19 is imminent and is predicted to affect children more severally, is extremely disastrous.