The Delhi high court on Tuesday stayed the proceedings before the trial court in the CBI's INX Media corruption case involving Congress leader P Chidambaram and his son Karti. 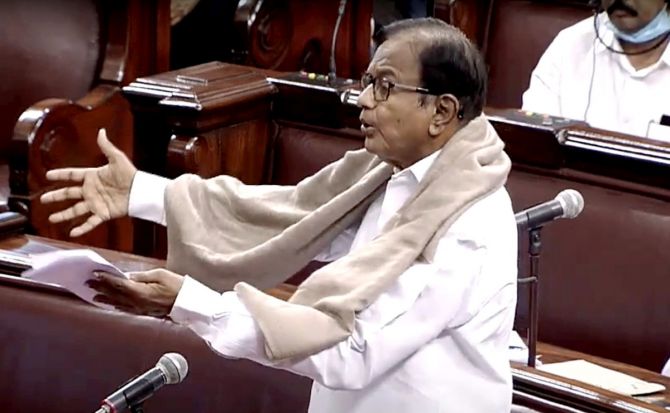 Justice Suresh Kumar Kait issued notice and sought responses of Chidambaram and others on the CBI's plea challenging the trial court order directing the agency to allow inspection of documents kept in malkhana (designated place in a police station to store seized property) by the accused and their counsel.

The CBI has sought to set aside the special judge's March 5, 2021, order to the extent that it directed CBI to allow inspection of documents kept in the malkhana by the respondents/accused/ their counsel.

The agency contended that trial court's order reflects intrusion into the investigative process of the CBI  and if accused persons are allowed to inspect documents available at the malkhana, the same would subvert the probe and there is every likelihood that they may tamper with evidence available.

It added that this would impinge the power of the CBI to inquire and investigate into the allegations of huge economic fraud and corruption at the highest level, having national and international ramifications.

It said out of 14 accused, only Karti had made the prayer to inspect malkhana documents, but however, the trial court erroneously allowed all the accused to inspect it and exceeded the judicial powers by giving relief which was not prayed for.

Besides, the CBI has also sought setting aside the observations in the order which says that the agency is required to file or produce before the court all the documents collected by it during the course of investigation of the case, and that the accused are also entitled to copies of such documents or inspections thereof, irrespective of the fact whether they are being relied upon by the CBI or not.

The CBI had registered its case on May 15, 2017, alleging irregularities in the Foreign Investment Promotion Board clearance granted to INX Media group for receiving overseas funds of Rs 305 crore in 2007 during Chidambaram's tenure as finance minister. Thereafter, the ED had lodged the money laundering case.

The CBI, through advocate Anupam S Sharma, said this case involves a high level of corruption with wide ramifications on society and while the accused have a right to fair trial, the collective interest of the society cannot be impinged.

It added that it is trite that the right to fair trial is not singularly absolute, as is perceived, from the perspective of the accused and it also takes within its ambit and sweep the rights of the society at large.

The CBI contended the very essence of trial is to unearth the truth for which the court cannot assist the accused in search of a plausible defence.

”This is against all principles of fair trial and due process of law. It is the basic principle of criminal law that though it is the duty of the prosecution to prove its case, however, the accused is supposed to either give the true version before the court or remain silent.

"An accused cannot build a false and imaginary defence, after examining the documents. A false defence is a circumstance which incriminates the accused,” the CBI said.

It alleged the trial court's order reflects intrusion into the investigative process of the CBI which is impermissible in law and the special judge lost sight of the fact that further investigation in the present matter is underway and if the accused persons are allowed to inspect documents available at the malkhana, the same would subvert the probe and there is every likelihood that they may tamper with evidence available.

”Secrecy is a pre-requisite of investigation into any offence. Confidentiality and insulation of the investigating agency and its investigation from leaks and disclosures at every stage has to be ensure,” it said.

"One cannot lose sight that the respondents/accused are highly influential people having huge resources, which can be gathered from the very fact that during the course of arguments, the respondents/accused referred to and also filed along with their applications, extracts/pages of relevant rules of the CBI Crime Manual 2020, although it is a restricted document and is meant for internal circulation within the CBI,” it said.

The agency said the legitimate aim would suffer irreparably if protection is not given to the documents and record which was permitted to be inspected by the accused.

The Chidambarams are already on bail in the case.

The court had earlier granted interim bail to other accused on a personal bond of Rs 2 lakh and one surety of the like amount.

Chidambaram was taken into custody on August 21, 2019, when he was arrested by the Central Bureau of Investigation (CBI) in INX Media corruption case.

On October 16, 2019, the ED arrested him in the separate money-laundering case. Six days later, on October 22, 2019, the apex court had granted him bail in the case lodged by the CBI.

On December 4, 2019, after 105 days of custody, Chidambaram was granted bail by the Supreme Court in the money laundering case lodged by the ED.